A few days ago, the 9th Asia Pacific Regional Conference of Solidarity with Cuba came to a close. At the final meeting, Prachanda–the co-chair of the Nepal Communist Party–articulated a sentiment that is shared by billions of people around the world. Cuba, he said, ‘is not just the name of a nation’, but it is a ‘symbol of the struggle for sovereignty’; it is ‘an inspiration for peoples’ organisations and movements’.

Nepal is in the midst of a fight to create a sovereign State and a socialist society. A year ago, the Nepali communist parties began a process to form their new party, which now holds a two-thirds majority in the Nepali parliament. The new party continues to deepen its unification, while the Nepali government struggles to advance an agenda for socialism in an adverse global context. To get a sense of these struggles, please visit People’s Dispatch and watch the interview with Bamdev Gautam on the agricultural transformation, the interview with Sabitra Bhusal on the emancipation of oppressed communities, and the interview with Radha Gyawali on the emancipation of women. All three are leaders of the Nepal Communist Party. The inspiration of Cuba hovers over the struggles in Nepal.

Since 1959, Cuba has faced a harsh blockade–a weapon wielded callously by the government of the United States of America. It was simply unacceptable for Washington, D.C. that a small island only two hundred kilometres from the United States would experiment with a socialist agenda. Last year, the executive secretary of the United Nation’s Economic Commission of Latin America (CEPAL), Alicia Bárcena, said in Havana (Cuba) that the U.S. blockade has cost Cuba $130 billion over the past six decades–the amount it would cost to build and maintain a new space station. This is a formidable amount of resources, which has left an ‘indelible mark’ on the social structure of Cuba.

Bachir Ben Barka, son of Mehdi Ben Barka, speaks about the Tricontinental with his father’s notes behind him.

But the Cuban people and organisations, as Nepal’s Prachanda said, are an inspiration. Among their organisations was the Organisation of Solidarity with Peoples of Asia, Africa, and Latin America (OSPAAAL), which closed its doors in Havana this year. OSPAAAL was formed after the Tricontinental Conference of 1966, which Fidel Castro called a ‘great feast of international solidarity’. The Tricontinental Conference–from which we get our name–was a gathering of radical national liberation and socialist forces from Vietnam to Chile. The conference called for solidarity with the anti-colonial movements–solidarity that should not come merely on an emotional register, but also solidarity in a material sense. The new grouping–OSPAAAL–emerged out of the more moderate Bandung spirit (which found institutional form in the Non-Aligned Movement, 1961) and of the more radical Afro-Asian People’s Solidarity Movement (1957–known as OSPAA in Spanish). One of the main organisers of the conference–the Moroccan revolutionary Mehdi Ben Barka–said that the Tricontinental would bring together ‘two currents of the world revolution: the current born with the October Revolution and the national liberation revolutions’ current’.

Ben Barka was assassinated on 29 October 1965. No final verdict has been given for this death, although–as Fidel said at the conference–it is likely that he was killed in Paris with the collusion of the French and Moroccan intelligence agencies. It is not impossible that the CIA would have been involved. The 1960s was a decade of immense violence of the Western powers against the national liberation movements–from the attempted overthrow of the Cuban Revolution with the Bay of Pigs landing (1961), to the U.S. invasion of Dominican Republic (1965), to the massacre of a million Communists and sympathizers in Indonesia (1965), to the terrible violence afflicted against the people of Vietnam. Such violence continues. Last year, the former head of the CIA James Woolsey spoke cavalierly–and candidly—about the interference of the CIA in elections in Europe and elsewhere against the Communists and to preserve ‘order’.

This is the world we live in, a world where the aspirations of the workers and peasants are arrogantly dismissed by men like Woolsey. It is a world where the violence of a B-52 bomber is seen as reasonable, whereas the cries for an end to hunger are seen as utopian.

For the past fifty-three years, OSPAAAL and Tricontinental–its magazine–have been a reference point for national liberation and socialist movements. OSPAAAL’s beautiful posters, about which we have written at length in our Dossier no. 15, were posted on walls across the world. From them, so many of us learned of the struggles from El Salvador to Zimbabwe to Cambodia. The analyses in the Tricontinental magazine, including interviews with leaders of movements and radical intellectuals, armed us for the battle of ideas. 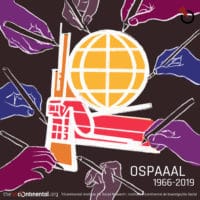 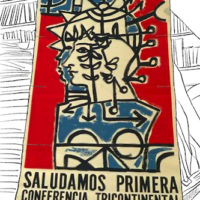 Homage to OSPAAAL, the Organisation of Solidarity for the Peoples of Asia, Africa, and Latin America- Newsletter Thirty-One (2019).

When we launched Tricontinental: Institute for Social Research last year, OSPAAAL warmly welcomed our work and our commitment to honouring the legacy–and the agenda–of the 1966 Conference. We are both sad to see OSPAAAL go, but we are strengthened by its work and its example. We know well the importance of contradictions and work, as the Cuban poet Miguel Barnet wrote in his poem Revolución:

In India, a legislator from the ruling right-wing Bharatiya Janata Party (BJP)–Kuldeep Sengar–is in prison awaiting trial for a 2017 rape and kidnapping in the small town of Unnao. The woman who charged Sengar with rape was driving in the Rae Bareli district with her two aunts, and her lawyer, when they were struck by a truck (whose registration plate was smeared with grease). The police had informed Sengar of the travel plans of the woman, her aunts, and her lawyer. The aunts died; the young women and her lawyer were grievously injured. Last year, after the police refused to register the case against Sengar, her father was assaulted by Sengar’s men. The father was arrested and died a day later in prison. Protests broke out across India over the car crash.

There is anger at the government and fear of its callous indifference. The All-India Democratic Women’s Association (AIDWA) says that this event shows the ‘muscle and money power’ of the BJP. Sengar–while in prison–remains a legislator and a member of the BJP (although, under pressure, the party said it had suspended him).

While this criminal activity unfolded, several BJP leaders shouted their irrationality to the world:

It is a sign that the Right has made serious advances in winning over the minds of the world’s people. It is a sign, in the words of the late Egyptian Marxist Samir Amin, that there is a ‘gap separating the autumn of capitalism from the possible springtime of peoples’. It is our duty to close this gap.

Killer heat in the United States: Climate Choices and The Future of Dangerously Hot Days
Live from Nicaragua: Uprising or Coup? A Reader