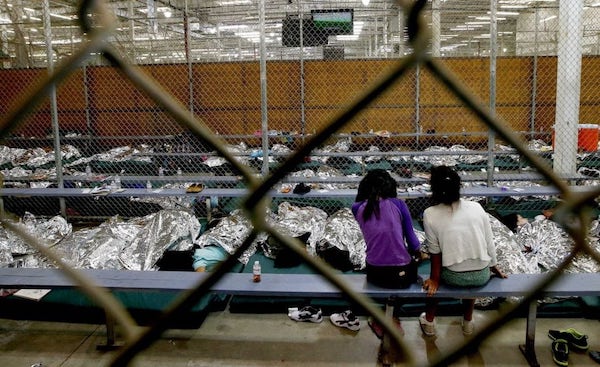 The Global Detention Project has identified more than 2,000 detention centers worldwide. For corporate powers and global elites borders have been erased, but migrants fleeing violence and economic insecurity are faced with deportation or detainment in inhumane detention centers. Todd Miller responds to the crisis at the border and exposes the contradictions in the government justifying the use of concentration camps to detain migrants.

In June it was finally settled, the short-term detention centers run by the U.S. Border Patrol were—quite technically—concentration camps. While they are not the extermination camps of the Holocaust, the rounding up and mass incarceration of people who haven’t seen a judge fits the definition exactly, according to expert Andrea Pitzer. The legal definition of concentration camps are “places of forced relocation of civilians into detention on the basis of group identity.”

But then the debate stalled out before getting to the broader context. The prison camps are not just an anomaly from a nativist Trump administration, they are something that has been happening for years and years. I’m not only referring to short-term Border Patrol detention, but also the mass round-up, incarceration, expulsion, and banishment of non-citizens that has been happening in a sustained way in the United States since the 1990s, and through a variety of huge operations before then. And it’s not something that is just limited to the United States. While the concentration camp may vary from country to country, it is one of the cornerstones of a global border system designed to arrest and confine uprooted, displaced, and dispossessed people. Many are on the move because of the current global economic and political system (globalization and the free market neoliberal economic model) that has long privileged the wealthy elite and protected the interests of multinational corporations, all else be damned.

The Global Detention Project, for example, has identified more than 2,000 detention centers worldwide. While those numbers are in fluctuation (and thus unreliable) given the constant closure and opening of such prisons—when seen visually on a map, these detention centers cluster in and around the United States, Europe, and Australia. Worldwide, there are more than 70 border walls, billions upon billions of dollars worth of surveillance technology—from sophisticated cameras to biometrics such as facial recognition—and tens of thousands of armed agents, police, and soldiers guarding the dividing lines between the Global North and Global South tasked with arresting unauthorized people. From the United States to Europe to Australia, but also from Mexico to Libya to Papua New Guinea the planet has prison camps crammed with tens of thousands of people—many forcibly separated from their families—who dared to cross a border. There is a violent global war on migrants.

The United States is playing a significant role in fortifying this global border system. When researching the extent to which the U.S. border and immigration apparatus extended outward across the globe, I knew I would find a lot, but I was surprised at its vastness and pervasiveness, not only in the Western Hemisphere, but also beyond. As put by U.S. Customs and Border Protection (CBP) commissioner Robert Bonner in 2004, the goal is to “extend the zone of security where we can do so, beyond our physical borders—so that American borders are the last line of defense, not the first line of defense.”

In other words, the U.S. southwestern international boundary line itself, with nearly 700 miles of walls and barriers, needs to be understood as one layer of a massive enforcement zone. On one hand, this zone extends into the interior of the United States with checkpoints, roving patrols, police and Immigration and Customs Enforcement operations. On the other hand, the U.S. border also pushes out extraterritorially into other countries in a variety of ways, via trainings, resource transfers, and agreements. As General John Kelly affirmed during his confirmation hearing for Department of Homeland Security (DHS) secretary in 2017 “our border security cannot be attempted as an endless series of ‘goal line stands’ on the one-foot line at the ports of entry or along the thousands of miles of border between this country and Mexico . . . I believe the defense of the Southwest borders starts 1,500 miles to the south, with Peru.”

One CBP official told me that its international programs have expanded “exponentially” since 9/11. Twenty-three CBP attaches are in U.S. Embassies around the world from Mexico to Brazil, from Nairobi to Manila. Close your eyes, and randomly point to anywhere on the map, odds are your finger will land on a country that has received some sort of assistance from the United States to build up its borders. Perhaps the constantly reinforced Mexican border with Guatemala is the epicenter of this (its U.S. trained forces are using U.S. supplied Blackhawk helicopters and biometric kiosks, among other things), but Guatemala, Honduras, and El Salvador have also created similarly funded and trained border patrols. The Dominican Republic’s border patrol, known as CESFRONT—after receiving the due diligence from the United States—guards the Massacre River in Dajabon with long assault rifles, in case any Haitians dare cross. Raytheon Corporation, via tens of millions of dollars from the United States, is building a “smart wall” surveillance system between Jordan and Syria and Jordan and Iraq, as well as a National Coast Watch Center (NCWC) for maritime security located in Manila Bay in the Philippines. Raytheon is but one of many companies to cash in on this global border system. If you are coming to the United States on any flight from abroad, your profile will be scrutinized by hundreds of agents in the National Watch Center located in Northern Virginia, who might even pry into your social media account if you catch their interest, or perhaps undercover CBP agents will monitor or question you in the airport. In the Caribbean the U.S. border is elastic, able to expand thousands of miles to the south where Coast Guard cutters push up to the coast of Haiti when there is the fear of an exodus, such as after the 2010 earthquake, or have become “floating Guantanamos” for alleged smugglers near Ecuador. The concentration camps are indeed everywhere.

Officially this outward thrust is about detecting, monitoring, and potentially stopping “threatening” people from coming to the United States from other countries. But make no mistake, it is also to protect Washington’s interests, and by that I mean Washington’s empire.

For corporate powers and global elites, borders have been all but been erased. Despite the unspeakable damage the world’s corporations have done to people and the planet, there is a free market system that has long been rigged in their favor. They can cross borders with few impediments. While armed agents blockade, incarcerate, and expel the world’s displaced and dispossessed, no Border Patrol stops corporate executives from flying over international borders in broad daylight to set up mines, do oil exploration, harvest Eucalyptus for paper, harvest African Palm for biofuels, build hydroelectric dams, usurp water, set up factories to make anything from bank pens to electronic components for missiles. Never mind if setting up shop means either contaminating vast amounts of water, extracting valuable resources, or violently displacing entire communities already living there.

Any impediment to profit must be removed, and for these human rights violations there will be no Immigration and Customs Enforcement raiding these corporate operations, detaining or deporting the executives and stock holders. Part of the structure of the global border system is to allow business to go on as usual. A status quo of ever-increasing inequalities between people, including more than 4 billion people worldwide earning less than $7 per day, a status quo of increasing ecological devastation and global climate crisis. In a world where the rich get richer, and the poor more powerless; in a world becoming torrentially wet or devastatingly dry, where rising sea surges are poised to carry away homes and livelihoods, there is only one way to keep the status quo: an iron fist. The border apparatus is a global scaffolding not meant to protect anyone, it is only meant to protect a system. The concentration camps are a despicable part of our government’s commitment to protect the status quo and ensure the continued supremacy of corporate interests.

Todd Miller is the author of Border Patrol Nation and Storming the Wall, which was awarded the 2018 Izzy Award for investigative journalism. His writing has appeared in the New York Times, TomDispatch, Mother Jones, The Nation, Al Jazeera English, and Salon.