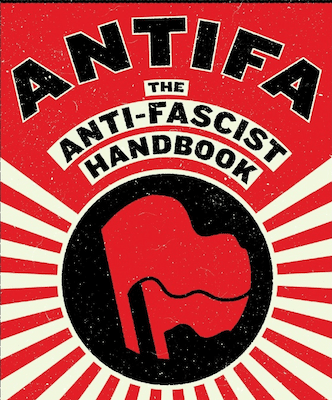 The rise in deadly attacks on minority communities by specimens of the American far right, empowered by the Trump administration and its infamous ‘fine people on both sides’ attitude to Charlottesville, prompted Mark Bray to put together a vital resource for anyone interested in the fundamentals of the anti-fascist cause.

In Antifa: the anti-fascist handbook, Bray presents anti-fascism as a ‘legitimate political tradition growing out of a century of global struggle,’ arguing that militant anti-fascism is a reasonable, historically informed response to the fascist threat that persisted after 1945 and that has become especially menacing in recent years’ (p.xii). Both a historical study and an explicit call to arms, Bray’s tour-de-force handbook has garnered noteworthy popular success, featuring heavily in Philosophy Tube’s YouTube video ‘The Philosophy of Antifa’.

Bray, a historian and former Occupy Wall Street organiser, whose Jewish family, now at rest, face fresh threats from fascist vandals desecrating cemeteries in New York (resurrecting Walter Benjamin’s warning that ‘not even the dead will be safe’), is well-equipped to portray vividly the severity of the current climate, and by extension the necessity of the response.

Through meticulously organised areas of focus, Bray follows the development of fascist organising from the earliest movements of the Action Franҫaise, founded in 1899, in Paris through to Trump’s America, rising neo-Nazism in Europe, and the new age of ‘Pinstripe Nazis’, covering an enormous amount of ground in between. A significant strength of the presentation of this history is in his frequent breaking out of strict chronology in order to emphasise similar characteristics of various examples of fascist behaviour. Rather than events being isolated according to location or time, Bray gives the reader access to documentation of a living process of development, enhancing the relevance of making action in the present.

Bray supports his calls for militant action both with thorough analysis of anti-fascist tactics throughout the century and by addressing the questions that contemporary anti-fascist actors face, for example questions surrounding concerns about ‘free speech’. And of course, the motivation for writing this handbook has been poignantly vindicated numerous times since its publication, perhaps most significantly when, in Pittsburgh a year later, a neo-Nazi carried out the single deadliest attack on the US’s Jewish community.

The account details numerous examples of inspirational inventiveness on the part of anti-fascists, from Morris Beckman’s iconic 43 Group disrupting Mosley’s British Union of Fascists meetings in the 1930s by using fake tickets to ignite arguments over double-booked seats (p.43), to German neo-Nazis held in buildings by peaceful Danish anti-fascists’ demonstrations for so long that their bickering resulted in factional splits (p.86).

Those interviewed by Bray in his research organise around a variety of causes, from labour organising to migrant solidarity work to the anti-war movement. As such, the nitty-gritty of tactics expounded can vary massively, yet they are unified by the simple premise of acting ‘out of collective self-defence’.

Bray suggests that ‘the success or failure of militant anti-fascism often depends on whether it can mobilize broader society to confront fascists’ (p.xvi). The effectiveness of an approach which seeks to build a mass movement can be seen in different moments of anti-fascist organising across the last century. Perhaps two of the most important examples in British history are the famous ‘Battle of Cable Street’ and, decades later in 1977, the demonstration in Lewisham which blocked the National Front.

The Cable Street demonstration on 4th October 1936 saw the large Jewish community of London’s East End, united with local socialists and trade unionists, block the fascists from marching. In 1977, the fascists’ target was the Asian community, but the broad alliances needed to turn them back were very similar. The latter event instigated the formation of the Anti-Nazi League, which was instrumental in creating ‘an anti-fascist movement of hundreds of thousands’ (p.47), successfully outnumbering and demoralising the fascist threat. The crucial lesson to draw from the history of anti-fascism is the importance of the capacity to mobilise large and diverse numbers of people. Such an approach is capable of uniting communities against the fascist minority, and draining far-right thugs of the confidence they need to threaten and intimidate.

The author is very direct about the limits of the handbook, in that it is by no means exhaustive, both in terms of the scope of action covered and also the diversity of the anti-fascist activists interviewed in the process of its assembly. But this by no means detracts from how welcome the book is. At a time when fascists feel safe enough to crawl out of the sewers, but people seem to have heartfelt moral objections to publicly humiliating political figures whose only tools are scapegoating minorities, this handbook is a significant resource.