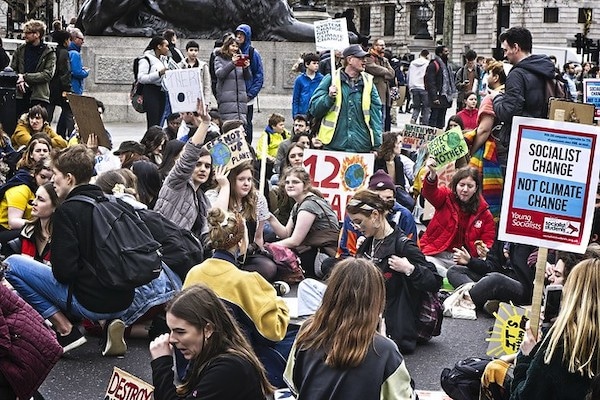 Photos taken at the Global Climate Strike in London on Friday 15th March 2019.

Organizers behind the global climate strike movement—from teenage students to adults who have fought for climate action for decades—on Tuesday called on all people who want to halt the climate crisis to join the worldwide action on September 20.

350.org, one of dozens of international, national, and local groups organizing the strike, announced Tuesday that with a month to go before the demonstration, thousands of people have already signed up to take part in the strike and the Week of Action that’s planned for the days that follow.

“Time is running out,” said Vic Barrett, a plaintiff in the Juliana v. United States case involving children, teenagers, and young adults who are suing the U.S. government for failing to protect them from fossil fuel emissions. “This decade is our last chance to stop the destruction of our people and our planet. This is our time to join in solidarity with communities around the world to fight for a just future. This is why we strike.”

“Youth and adults, institutional and grassroots organizations, climate-focused and social justice groups, are coming together as a unified front to demand transformative action on climate,” the grassroots group said in a press statement.

The strike is being organized amid increasingly dire news and predictions about the climate crisis. The U.S. agency NOAA reported last week that July 2019 was the hottest month on record, with scientists cautioning that warming will get worse unless fossil fuel emissions are drastically reduced. On Sunday, Icelanders held a funeral for the country’s first glacier to be entirely lost due to the warming of the planet.

350.org co-founder and author Bill McKibben tweeted, “In September, we have to turn up the political heat” to convince world governments that carbon emissions must be reduced to net zero as quickly as possible to keep the Earth from warming more than 1.5 degrees Celsius.

July was the hottest month the planet has ever seen.
In September we have to turn up the political heat.
Sign up for the Sept. 20 #ClimateStrike strikehttps://t.co/z3pbYdsUNb

Large gatherings are expected in major cities including New York, London, and Berlin, with strikes taking place across Africa, Latin America, and Asia as well.

In addition to the global climate strike on the 20th, during the Week of Action from September 24 to 28, organizers will hold protests targeting specific fossil fuel companies and projects, teach-ins, people’s assemblies, and other events.

“We’re talking about trying to get two to three percent of the population, which doesn’t sound like a lot but that’s a lot of people,” a student organizer named Sana, who is attending a climate strike in New Jersey, told the UN Foundation. “We’re calling for adults and students to be striking. Don’t go to work, don’t go to school, speak up about climate change because it’s something that we need to be talking about and something that we need to show our leaders that we care about.”

“Hear what we have to say and take that as a message to actually do something.”

“Because of the actions of the United States government and the fossil fuel industry, my generation has never known a world free from the impacts of climate change,” said Barrett.

Millions of people have taken part in climate strikes all over the world since September 20, 2018, when Greta Thunberg held a one-person protest outside Swedish Parliament and refused to attend school until her government took meaningful action to curb fossil fuel emissions which have helped make the last four years the warmest on record.

The strikes, which have taken place on a weekly basis since then in countries including Belgium, Uganda, the U.S., Australia, and Japan, have been credited with helping to convince several countries and municipalities to declare a climate emergency and the European Commission to commit $250 billion to combating the crisis.

“We will go on for as long as it takes” to achieve more meaningful action, Thunberg tweeted Tuesday.

1 year ago I started school striking for the climate outside the Swedish parliament, simply because something had to be done. Since then I have continued every Friday alongside millions of others. And we will go on for as long as it takes. #FridaysForFuture #SchoolStrike4climate pic.twitter.com/egpP5UjpHn

“Our movement continues to grow and we will not rest until we stop burning fossil fuels and until we begin a rapid energy revolution with equity, reparations, and climate justice at its heart,” said May Boeve, executive director of 350.org. “This is why we support the incredible and brave young people from every corner of this globe who are demanding that we all rise together now.”

The global grassroots movement Extinction Rebellion, which has organized its own public actions around the world, expressed support for the climate strike and called on those who are concerned about the future of the planet to push through their “despair and eco-anxiety” and “turn such energy to action.”

“Despair and eco-anxiety are reasonable responses to this emergency. But they will not solve it. We need to turn such energy to action.”#GlobalClimateStrike 20.-27.9https://t.co/4YUnbRUPWu

Shortly after the Week of Action ends on September 28, Extinction Rebellion will begin its own “Worldwide Rebellion” involving the peaceful occupation of parts of London and calling on people all over the globe “to rise up and rebel for our deep love of life and the need to protect it.”