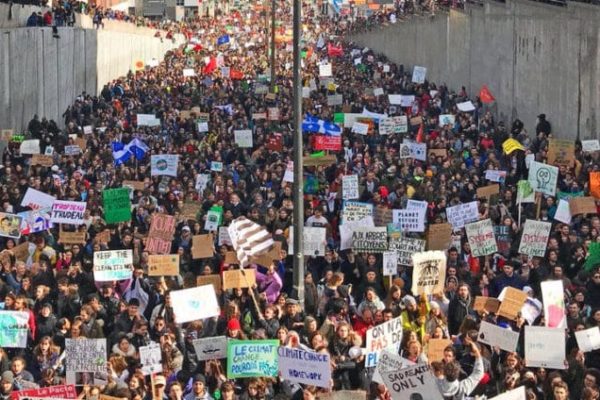 On Friday, March 15 over one million young students from around the world walked out of class to demand that their governments take serious action against climate change. The global student strike for climate was held in 2000 cities across 125 countries. In Canada over 56 cities had youth climate protests, the largest of which was in Montreal where over 150,000 young marchers filled the streets and shut down schools.

The world-wide student strikes for climate action are inspired by 16-year-old Greta Thunberg, who began by protesting outside the Swedish parliament buildings last August. Terrified for her future, she decided to skip school on Fridays to protest her government’s inaction on the climate crisis, hence the name Fridays For Future. Greta has since gained global attention and travelled to North America by boat to attend a UN climate summit on September 23. She will be attending the September 27 rally in Montreal.

“Starting on Friday 20 September we will kickstart a week of climate action with a worldwide strike for the climate,” Greta said in a statement. Many organisations have been promoting the September general strike while local groups have been preparing actions for that week.

General strikes involve more than just mass demonstrations. Historically, general strikes have been called by unions and involved workers of an entire city or region walking off the job with the purpose of driving industry to a halt. These efforts would involve thousands of participants, including workers from several different industries and their supporters, who protested on the streets and were often met with police. Examples include the 1917 International Women’s Day textile worker’s strike in Petrograd that initiated the Russian Revolution, and the 1919 Winnipeg General Strike 100 years ago which resulted in a streetcar tipped over and several strikers shot or arrested by North West Mounted Police. General strikes have helped the working class win many gains. If properly organized, they may be an effective way to fight the fossil fuel industry and address climate change.

Under capitalism, everything is exploited for the purpose of economic growth and accumulation of wealth. This ever-increasing growth will never be compatible with a sustainable society because you cannot have continuous growth on a finite planet. Think of our resources in terms of a bank account. We have our main spending account that we use, but when that’s used up, when those resources are used up, we take from our savings account to cover us for the rest of the year. Our current trend of over-consumption forces us year by year to dip into this savings account of resources, which is getting smaller and smaller.

Earth Overshoot Day, the day that humans have used up the amount of resources that the planet is able to regenerate annually, is landing earlier every year. The first Earth Overshoot Day was December 29, 1970; in 2018 it was on August 1, and this year it was on July 29. That means that for 4 months of this year we are taking resources that the planet will not be able to produce for us in the future. We are currently consuming 1.7 Earth’s worth of resources every year.

Since capitalism is the cause of the current sixth mass extinction, the choice now is either socialism or extinction. There are several examples of socialist countries that are finding solutions to the ecological crisis.

In 2016 the World Wildlife Fund reported that Cuba was the only sustainable country in the world, as it manages to retain a low ecological footprint while keeping a relatively high standard of living for its citizens. Cuba adopted a low carbon approach in the 1990s, when the Soviet Union was overthrown and a major importer of fossil fuels was lost. The people had to make a dramatic transition during this Special Period, and under socialism they did.

Last year, China reached its Paris Agreement goals for reductions in greenhouse gas emissions, ahead of its 2020 deadline. The Chinese government took action to dramatically reduce the pollution from its largest companies, through a type of carbon credit system that forces polluting corporations to pay.

China has planted millions of trees, and 60,000 soldiers in the People’s Liberation Army are currently being mobilized to plant 32,400 acres more. China’s efforts to plant trees is noticeable from space – NASA has spotted large regions of green in the eastern half of the country that were not there 20 years ago.

Canada, a capitalist country, is not doing so well. While Prime Minister Justin Trudeau did declare a nationwide climate emergency on June 17, he also approved the Trans Mountain fossil fuel pipeline the next day. Trudeau has broken many of his promises to Indigenous communities, who have already been fighting the hardest to defend their natural ecosystems. Canada is far behind on reducing carbon emissions and reaching the Paris Agreement target for 2020. At the current rate it will take centuries to reach that goal, and by that time it will be far too late.

This is why it us up to the youth, the students and the next generation of leaders to clean up the mess and the mistakes that previous generations have made. We must work to dismantle capitalism, so that the Earth is no longer seen as a commodity and we can end this trend of mindless over-consumption.

We must act now.