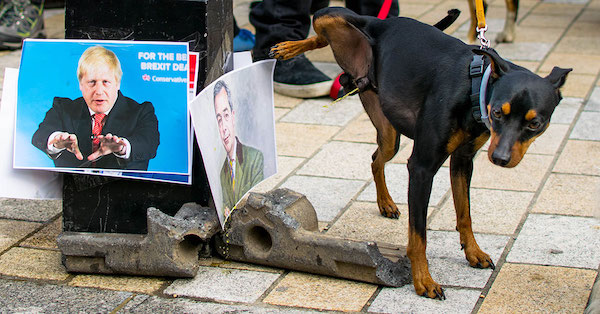 There are some very obvious facts in British politics which nobody seems to be saying.

Joanna Cherry stated in her successful court case that “the dogs in the street know” that the real reason that Boris Johnson had prorogued parliament was to prevent parliament from having an effective say on the outcome of Brexit. The documents that the government was forced to produce to the Scottish Courts proved beyond any shadow of a doubt that was indeed Johnson’s motive.

So why are we expected to believe that what you knew and I knew, what Joanna Cherry knew, what the very dogs in the street knew, was not known to the Queen? Do we really believe that the Queen was “misled” and that she and her courtiers were the only people in the entire country who actually believed that Johnson just wanted the longest prorogation for 89 years to prepare a really good Queen’s speech? Are we really expected to believe that the Queen had not noticed that Brexit was at a crucial stage and the effect that prorogation would have on parliament’s say in the process?

This is obviously complete and utter nonsense. The Queen has better sources of information than any of us and knew exactly what was happening. She was not “misled” by Boris Johnson, she was his ally in a common purpose. She absolutely understood both the context and the effect of the prorogation. All this utter nonsense about the Queen being “lied to” and “misled” is part of this strange myth of the ultimate goodness of authority which is a recurring theme in human societies. Peasants died under the knout while building the Trans-Siberian railway thinking “if only the good Tsar knew.” The Queen is not a naive figure of Christ like innocence taken in by Boris Johnson, she is an ultra wealthy woman of very conservative views embedded in a social circle dominated by very rich and reactionary people.

To repeat what I have repeatedly explained, it was unconstitutional for the Queen to appoint Boris Johnson in the first place when it was plain as a pikestaff that he could not command a parliamentary majority. That initial crime (and I use the word advisedly) was compounded by the decision to prorogue parliament to enable her no majority Prime Minister to govern. In a sane world we should be getting out the pitchforks. Instead people are tut-tutting about the poor Queen being misled.

The next fact that is plain as a pikestaff is that Tom Watson is seeking to throw the election. One of the few true things Boris Johnson said in his knockabout performance in Parliament’s last sitting was that there were some on the Labour benches who were worried that Labour might win the next election.

Make no mistake, the Tories are in trouble. They need to pile on millions of votes in Northern English Labour constituencies before they actually start to win any, and they have thrown away existing liberal Tory support in London and southern England in order to pursue that goal. First Past the Post is very capricious, and once the leading party falls to 35% results become fickle even where there is a decent plurality. Regional concentration is actually an advantage in FPTP and in effect the Tories are in danger of evening out their support across England too much. They will certainly be down to a maximum of two seats in Scotland. They will have large losses to Labour and Lib Dems in London and the South West. All that is before we get in to the campaigning period and Jeremy Corbyn’s ability to solidify the Labour vote.

So with the prorogation row, the parliamentary defeats, the lost court cases and the Yellowhammer documents, Boris Johnnson was looking on sticky ground. The Labour Party had finally arrived at an apparently workable stance on Brexit: a general election followed by a second EU referendum with options of a viable deal and remain. Jeremy Corbyn, who had succeeded in helping build an opposition consensus on parliamentary tactics, has been looking in his strongest position for some time.

At this crucial moment enter Tom Watson with an entirely uncalled for intervention before a luvvies conference on the creative industries, trailed for all it was worth by the Blairite publicity machine. It was boosted to all the media specifically as Tom Watson taking on Jeremy Corbyn, and given wall to wall media coverage, carried live on the major broadcast news channels. What Watson had to say was simply a reiteration of Tony Blair’s article in the Evening Standard three days earlier; that there should be an EU referendum before a General Election.

What was the point of this Watson intervention? The first thing to say is that the real point was not the apparent purpose stated in the speech. Tom Watson knows full well there is no chance whatsoever of a new EU referendum ahead of a general election. The current parliament will never agree it. The expelled Tory rebels were almost all supporters of May’s deal and have almost all specifically ruled out a second referendum. At least 30 Labour MPs, led by figures like Stephen Kinnock, John Mann and Caroline Flint, would not agree to it. The DUP would never agree. It is a complete non-starter.

Why then would Watson deliver it? And not just deliver it quietly as a think piece, but deliver it with all the media hullabaloo that could possibly be mustered? The answer is quite simple. At Blair’s behest, Watson did it quite simply to damage Corbyn. At a time when the government was in deep trouble, when Corbyn had just addressed the TUC conference to applause with a finally coherent Brexit position, Watson’s aim was simply to damage Corbyn.

Watson sought to damage Corbyn in two ways. To damage him by staking out a more extreme Remainer position that might put a wedge between Corbyn and the new expanded Labour Party membership. And to damage Corbyn by giving headlines about Labour splits, taking the heat off the Tories and cutting at Labour’s standing in the polls just as it looked set to improve.

Because the one thing the Blairites detest most of all is the prospect of a Labour victory and a Corbyn government, implementing comparatively left wing policies that might prove popular and cause a real change in political discourse in England and Wales. Because that would be the death knell for the Blairites and their corporate sponsors.

Just as we are supposed to believe that the Queen is a naive waif innocent of Johnson’s schemes, we are supposed not to notice that Tom Watson seeks to damage Labour and ensure Corbyn does not come to power. We live in times when the media and the political class inhabit a world of polite pretence; a world where outsiders like me have a duty to point to the actual glaring facts, whether people listen or no.