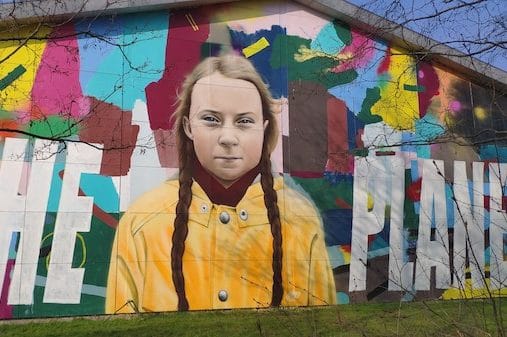 Here is my speech from the Brilliant Minds conference in Stockholm. Since I don’t have the video yet, I’m sharing it like this.

Around the year 2030, we will be in a position where we probably set off an irreversible chain reaction beyond human control, that will most likely lead to the end of our civilization as we know it.

That is unless in that time, permanent and unprecedented changes in all aspects of industrialized society have taken place. Including a reduction of our CO2 emissions by at least 50%.

And please note that these calculations are depending on inventions that have not yet been invented at scale.

Furthermore these scientific calculations do not include most unforeseen tipping points and feed back loops.

Nor do these calculations include already locked in warming hidden by toxic air pollution. Nor the aspect of equity, which is absolutely necessary to make the Paris Agreement work on a global scale.

And these calculations are not opinions or wild guesses. These projections are backed up by scientific facts, concluded by all nations through the IPCC.

So if we are to stay below the 1,5 degrees of warming limit, which is still possible within the laws of physics, we need to change almost everything. We need to start living within the planetary boundaries. This will be a drastic change for many, but not for most.

Because most of the world’s population is already living within the planetary boundaries. It is a minority who are not.

The richest 10% of the world’s population emits about half of our emissions of greenhouse gases. The richest 1% emits more than the poorest 50%.

And this is not about glorifying poverty, this is about the laws of physics and the remaining amount of greenhouse gases that we can still emit into the atmosphere to be in line with the Paris agreement.

It is not people in countries like Mozambique, Bangladesh or Colombia who are most responsible for this crisis. It is mostly down to people like you here in the audience.

Entrepreneurs, celebrities, politicians, business leaders. People who have a lot of power.

People who consume enormous amounts of stuff. Who often fly around the world, sometimes in private jets.

Your individual carbon footprints are in some cases the equivalent of whole villages.

But the worst part I think is that you are normalizing this extreme lifestyle. Because people look up to you. You are the role models, you are setting the standards. People aspire to be like you.

About 100 companies emits approximately 71% of our total emissions of CO2. And yes I know, we need a system change rather than individual change. But you can not have one without the other.

If you look through history all the big changes in society have been started by people at the grassroots level. No system change can come without pressure from large groups of individuals.

And no, I don’t blame you. I know you are not acting like this because you are stupid. You are not ruining the biosphere and future living conditions for all species because you are evil. At least I hope not. I know that almost everyone of you are simply uninformed. Just like the rest of the world’s population.

I know that you here in the audience didn’t travel here to see a sixteen year old girl who says strange and uncomfortable things.

But you know what? We need to dare to be uncomfortable. We need to be brave enough to say and do things that may not increase our profit, or our popularity. Because otherwise we won’t stand a chance.

We need to start thinking outside the box. To acknowledge that we don’t have all the solutions to the climate and ecological crises yet, unless those solutions mean that we simply stop doing certain things.

We need to accept that the market and new technologies will not solve everything for us. We need to admit our common failure. And then we need to act, while there’s still time

At meetings like these you love to listen to entrepreneurs, new ideas and new inventions. But when it comes to the climate crisis the time for those magic new inventions has just about come and gone.

And even though we most certainly need to embrace every bit of new clean technology – we can no longer look away from the obvious fact that we also need to change our behavior. Some more than others.

The theme of this year’s Brilliant Minds conference is “Fluxability Quotient”. It’s what the organizers call “a symphony of big picture thinking”.

Well, here is some big picture thinking for you.

If you regularly fly around the world, eat meat and dairy and are living a high carbon lifestyle then that means you have used up countless of people’s remaining carbon budgets. Carbon budgets that they will need in their everyday life, for generations to come.

And if that wasn’t enough, those who’s carbon budgets we are stealing are the ones least responsible and the ones who are going to be affected the most by this crisis.

According to climate scientist Kevin Anderson, if the richest 10% of the world’s population would lower their emissions to that of the average citizen of the European Union, then the world’s emissions of CO2 would be cut by about one third.

I think we can safely say that everyone in this room belong to that 10%. Including me.

To make the changes required we need role models and leaders. People like you. I am certain that most of you sitting here will have the wisdom, the courage and the common sense to take a few steps back. To see the full picture. To make the sacrifices that are necessary. And to become the leaders we need you to be.

The question is, will you do it in time?

Future generations are counting on you. Don’t let us down.