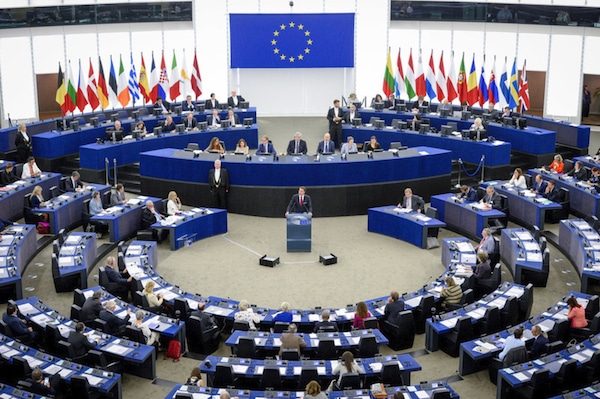 A number of communist parties, as well as progressive sections in Europe, have condemned a controversial resolution passed by the European Parliament on September 19. The resolution was tabled by the center-right European People’s Party group (EPP Group). While emphasizing the importance of “remembrance” for the future of Europe, the resolution goes so far as to equate communism with Nazism. It also calls for the erasure all memorials of “totalitarianism” across Europe, including memorials dedicated to the Red Army.

Categorizing the Second World War as “the most devastating conflict in the history of Europe,” it posits that war was “the immediate consequence of the German-Soviet non-aggression treaty of 23 August 1939, also known as the Molotov-Ribbentrop Pact”.

Progressive activists have alleged that such a resolution is only the continuation of the European Union (EU) leadership’s vicious strategy of selectively targeting the anti-fascist legacy of the Communist party and the Soviet Union, while concealing the role played by Franco’s Spain and Mussolini’s Italy in supporting Nazi Germany.  The two countries are now among the leading EU member-states.

The Confederal Group of the European United Left / Nordic Green Left (GUE / NGL)  issued a statement in the European Parliament, condemning the use the 80th anniversary of the start of World War II as a pretext for historical revisionism, in order to score political points.

Francesco Maringiò, member of the Italian Communist Party’s department of foreign affairs, opined in his article in Global Research that the resolution reflected the EU leadership’s contempt for historical truth, as it attempted to absolve certain European chancelleries of their contribution to the rise and victory of the fascist and Nazi regimes, and the innumerable crimes perpetrated by them. In this absurd game of equality and compensation “between totalitarianisms”, the fundamental role played by the Red Army in registering victory over Hitler, has been denied, he added

The Communist Party of Greece (KKE) also denounced the resolution, saying that the  purpose of this “reactionary monstrosity” was to legalize the bans on communist parties and communist symbols that have been imposed in a number of EU countries. There has been an attempt to normalize the criminalization and persecution of communist ideology, along with peoples’ movements that have joined forces with the communists to resist the anti-people policies of the EU, and the growing trend of neo-fascism.

The Portuguese Communist Party (PCP) said that “the text now approved in the EU Parliament promotes the most reactionary conceptions and falsifications of modern history, in a deplorable attempt to equate fascism and communism, minimizing and justifying the crimes of Nazi-fascism and silencing the collusive responsibilities of the great capitalist powers — like the United Kingdom and France — who paved the way to the beginning of World War II in the hope of pushing the Nazi hordes upon the USSR.”

With respect to the singling out of the Ribbentrop-Molotov Pact, “disregarding its historical context, the resolution adopted by the majority of the European Parliament omits how the great capitalist powers tolerated, colluded and aligned with the ascent of fascism in several European countries, motivated by the battle against the communist ideal and the enormous economic and social achievements of the workers and peoples of the USSR,” the PCP said.

The Partito Communista (PC) claimed that in a time of profound economic crisis, when an escalation in the attacks on workers’ rights and welfare has distressed the popular classes, anti-communist moves by the EU only revealed the strategy of the dominant classes, of weakening every capacity for resistance and re-organization that is necessary for a class struggle.

Communist party cadres in countries like Poland and Ukraine, among others, have been facing persecution by the state and by neo-fascist groups. States like Germany and Italy have also taken a lead in propagating polarizing anti-immigrant and hyper-nationalist rhetoric.