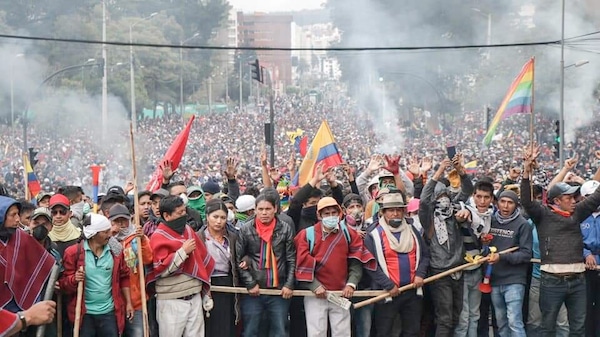 On October 9, the people of Ecuador took part in a massive national strike called by a number of organizations against the neoliberal reforms of president Lenin Moreno. Tens of thousands of workers, students, Indigenous people, peasants, Afro-descendant people, women and citizens took over the streets of Quito. The mobilization was directed towards the Historic Center where the Candolet Palace is located, but the area continues to be heavily militarized and barricaded and protesters were met with heavy repression.

In the midst of the strike, Moreno returned to the capital from Guayaquil, where he had temporarily shifted the seat of government to on Monday, as permitted by the state of emergency. He claimed that the primary focus of his return was to engage in dialogue with the mobilized organizations. Yet he has yet to meet their conditions which include the repeal of the economic measures and the resignation of interior minister Maria Paula Romo and minister of defense Oswaldo Jarrín. These ministers have been identified by movements as directly responsible for the brutal repression of protesters.

Last night, following the day’s massive march, police launched tear gas bombs and attacked the humanitarian refuge and aid distribution centers at the Catholic and Salesiana Universities where old senior citizens, women and children were staying. Many members of the Indigenous movements are staying in the centers as they came from outside the capital.

Organizations have condemned the use of tear gas, unconventional weapons, firearms and batons by the police and military. Eight protesters have been killed and hundreds are suffering from grave injuries. According to official figures, in the past seven days of protests, over 766 people have been arrested and 128 have gone through legal proceedings.

The mobilizations that have been occurring daily since October 2 are in response to a set of neoliberal economic measures or the paquetazo (package) announced by Moreno on October 1, including the elimination of a decades-old fuel subsidy. Despite the plurality of voices, organizations, and movements that have been on the streets for the past week rejecting the measures, the government and its regional allies claim that the protests have been instigated by former president Rafael Correa and Venezuelan President Nicolás Maduro. Furthermore, Lenín Moreno has reiterated, several times, that he will not change his position on the economic measures.

On October 8, Moreno ordered a partial curfew from 8 pm to 5 am in areas near government buildings through an executive decree 888. The curfew restricting the circulation of vehicles and people will remain in force throughout the state of emergency declared by the president last week, which could continue for a period of 30 days.

The Confederation of Indigenous Nationals of Ecuador (CONAIE), one of the biggest social organizations in the country, condemned the measure of curfew and called on people to continue mobilizing.

On October 8, 2,000 protesters from different Indigenous, peasant and social organizations and trade unions occupied the Ecuadorian Assembly and held a People’s Assembly. They too were brutally repressed by the national security forces, who threw tear gas and shot rubber bullets at the demonstrators. Several dozens who participated in this action were arrested and processed.

Several alternative media projects that have been closely following the protests have also been subjected to raids and censorship. The radio station ‘Pichincha Universal’ denounced a raid carried out by the national police and the Attorney General’s Office on its headquarters. Through its Twitter account, the media outlet informed that the measure was executed “for the alleged crime of inciting discord among citizens.” Pichincha Universal has been extensively reporting on incidents of police repression across the country.

Social Movements of ALBA expressed its support for the people of Ecuador in their fight against the “lackey and subordinate government”. ALBA denounced the deaths caused by police repression and held Moreno and his government responsible for them.

“In less than three years, Moreno’s administration has indebted Ecuador to the tune of more than 20 billion dollars and effected tax cuts worth 4.295 billion for the rich. This income is now what the State pretends to recover from the rest of the people. Meanwhile, the winners of this neoliberalist party, the bankers, have reported earnings for more than 500 billion dollars. In summary, a massive theft endorsed by mass media and international institutions. Nothing we haven’t seen before. But the straw that broke the camel’s back was the paquetazo to make the people of Ecuador pay its debt, by removing subsidies to fuel, whose consequence will be rising prices of food and basic products consumed by the working class,” said ALBA in an official statement.