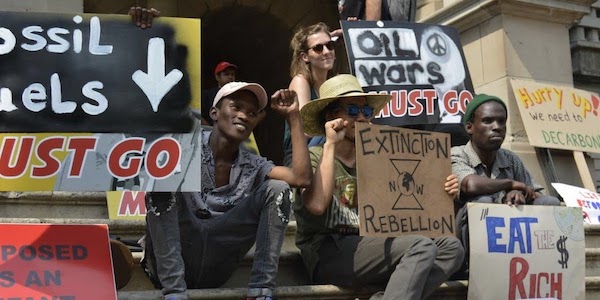 At the 2019 Labour Conference, Shadow Chancellor John McDonnell’s speech was remarkable for a number of reasons. It outlined the most radical fiscal policy proposals of a major political party in the Global North for decades, including a four-day working week, workers’ right to company shares and new universal basic services programmes. His most radical statement was however identifying the urgency and importance of the fight against climate change.

Following this recognition, McDonell pledged ‘reparations’ to countries in the Global South for Britain’s history of colonialism and early industrialisation by providing free or cheap access to the technologies developed by state investment as part of the Green Industrial Revolution. Not only was this an extremely rare instance of a prominent member of the political class acknowledging the damage caused by Britain’s colonial legacy, it also serves as an operational way to rethink the priorities within the present climate change movement.

Extinction Rebellion (XR) has undeniably been very effective in mobilising thousands of people and forcing the issue of climate change at the front and centre of public consciousness–not just in the UK, but globally. Its April protests, which shut down large swathes of Central London and became headline news, eventually forced the government to declare a national climate emergency. A recent poll commissioned by Christian Aid found that 71 percent of the British public consider climate change to be an issue of greater pressing long-term concern than exiting the European Union.

Yet elements of XR’s tactics, as well as its conceptual framework–which is reflected across the broader mainstream climate movement–leave a lot to be desired. As two weeks of International Rebellion get underway, including protests around Westminster and across the UK, it is time to be honest about climate emergency in the Global South and to take an explicitly anti-capitalist stance.

XR have made three key demands to the British government. First, that they must tell the truth regarding the urgency of the climate crisis and declare a state of national emergency. Second, they must act now to halt biodiversity loss and reduce carbon emissions to net zero by 2025. Third, they must set up and follow the decisions of a Citizen’s Assembly on climate and ecological justice.

In considering these demands, we must first ask: exactly which ‘truths’ we are referring to? For example, it is true that the per capita CO2 emissions in the richest half of world countries accounts for 86 percent of total global emissions. It is also true that the increasingly prevalent extreme weather events caused by climate change are far more likely to affect the poorer countries in the Global South. People fighting the direct impacts of climate change in their own communities, primarily in the Global South, are being murdered at a rate of four people every week. These basic truths are notably absent from XR’s core narrative.

Second, and relatedly, when it comes to the matter of a Citizen’s Assembly, whose voices will be represented? As McDonnell mentioned in his speech, Britain was among the first countries to become industrialised, beginning our current trajectory towards catastrophe. The early industrialisation of Britain and the other colonial powers was only possible in part through the deindustrialisation of colonised nations. Today, centuries later, the dynamic has hardly changed: the ecological costs of the North’s overconsumption continue to be outsourced to the South.

Consequently, and on the flip side, increasing ecological crises will inevitably lead to increased migration as entire countries become uninhabitable and conflicts arise over resource shortages. This burgeoning reality requires a radical rethinking of current immigration policies, particularly by states in the Global North, which have the greatest capacity to accommodate people displaced. Instead, increasingly xenophobic and racist brands of politics are on the horizon. We can’t have a truthful discussion about the dimensions of climate change without addressing these issues as well.

Another, larger truth is that capitalism is fundamentally incompatible with the actions needed to tackle climate change. This is hardly, if ever, mentioned by XR. Not even the most aggressive current proposals for investing in green energy can effectively neutralise the increasing energy demands of a growth-driven economy and keep the global mean temperature rise to less than 1.5°C. Market-based ‘solutions’ to climate change, such as carbon taxes or cap-and-trade systems that allow corporations to buy the right to pollute, have been proven to not work. Not only is the free market already massively skewed in favour of the fossil fuel industry through subsidies and tax credits, but many of these free market schemes–such as the recent UN-led initiative for ‘blue carbon’, using coastlands for their carbon storage capabilities–have resulted in grave socio-ecological consequences for indigenous communities. It is time for a different approach.

A coalition of international activist groups has come together in order to challenge these prevalent discourses, particularly within XR. Under the banner of Global Justice Rebellion, we are hosting one of the twelve named XR hubs in Central London throughout the ongoing October Rebellion. The space is hosting talks, workshops, arts and music events, debates and celebrations which are expressly platforming and led by groups working on the frontlines of the climate crisis in the Global South. Activists from Asia, Africa and Latin America are sharing their perspectives on issues ranging from the impact of mining on indigenous communities to the neo-colonialism of NGOs, among many other topics. We are running the space with the aim of adding a fourth demand for global climate justice to the existing three–as has been done by XR in the United States. This move can help us build an internationalist movement of solidarity in recognition of the fact that our different struggles ultimately depend on one another.

The Stop the Maangamizi: We Charge Genocide/Ecocide campaign is just one group present at our site in Victoria Gardens. The campaign was launched by an alliance of pan-African academics and activists to petition the British government into creating a commission for truth and reparatory justice for Britain’s role in the history of slavery, colonialism and ecocide in Africa. Kofi Mawuli Klu, one of the group’s co-vice chairs, explained: ‘Tracing the present Climate and Ecological Crises to their beginning clearly shows the huge ecological debt owed to the peoples colonised with the reactionary violence of ecocide by the ruling classes of Europe through Imperialism, now still being criminally enforced as Neocolonialism. That is why there can be no seriously effective climate and ecological redress without reparatory Justice.

XR highlights the need to look for solutions beyond politics, and there is an element of truth to that stance. But that shouldn’t have to mean absolute political neutrality. The general elections that will almost inevitably be called in the coming weeks will be an unprecedented opportunity. The pledges made by the Labour Party at their 2019 conference are by far the strongest we have seen in terms of tackling the consequences of climate change in a holistic manner–not just through the Green New Deal but also through pledges to end the ‘hostile environment’ and close detention centres. It ought to be XR’s prerogative to use their influence to make such promises a reality.

However, given how deeply the structural injustices of capitalism and colonialism are embedded in the current political system, we also need to look for solutions outside of those institutions. At such a crucial juncture in our history, it is vital to build solidarity between resistance movements working on the ground in defiance of the climate crisis.

People living in the Global North may find it difficult to envision the full extent of damage done to poorer regions of the world through practices entwined with, and fuelling, climate change, because those stories have been left out of the dominant narrative. The Global Justice Rebellion could prove to be a vital catalyst in reshaping our ideas, by bringing those stories to the forefront, and helping to foster a worldwide web of people power that can truly fight to reclaim our future together.

Aranyo Aarjan is a writer and a spokesperson for the Environmental Justice Bloc, one of the groups organising the Global Justice Rebellion.