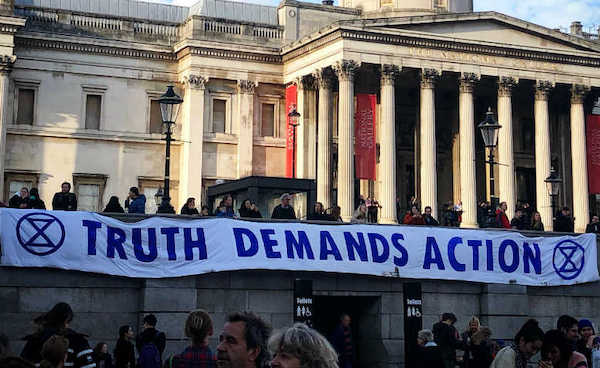 The threat to our civil liberties from the police banning Extinction Rebellion protests is dangerous and we must resist, argues Sweta Choudhury

Since the Extinction Rebellion protests started a week ago, protestors have occupied several central London locations to make their point. Their demands to the government: to tell the truth about the climate and ecological emergency; for it to adopt a target of zero carbon by 2025; and for the government to set up a citizens’ assembly to decide future policy on the environment. Is that too much to ask for when our very existence on this planet is under threat? It’s a fact that there is currently no effective action on climate change and it is in this context that the protests organised by Extinction Rebellion are so significant.

But on Monday evening, the Metropolitan Police launched a massive crackdown at Trafalgar Square, without prior warning, after issuing a revised Section 14 order saying ‘any assembly linked to the Extinction Rebellion must cease in London by 9pm’. Thereafter, hundreds of police officers arrived at Trafalgar Square to clear protesters from their camps and made preventive arrests using vaguely defined criminal offences.

The disruptions in central London brought by XR protesters over the past week to highlight the growing threat of climate change and global warming are nothing compared to the disruptions to the climate and ecology caused by the current abuse by humans on our planetary biosphere. From our addiction to fossil fuels to continuing pollution of the planet with plastic and nuclear waste, we have abused our planet to an almost irreparable and unrecoverable state. And so it is imperative and necessary to remind humans again and again that the total planetary abuse is not sustainable and if we don’t take any action now, we will completely destroy this planet for the future generations.

Peaceful protests and our ability to effectively hold accountable those in power is the very essence of democracy. The Met police imposing a blanket ban on the reasonable democratic dissent of the XR protesters and criminalising peaceful protest is deeply worrying. It is an outright attack on our civil liberties and an infringement on the basic democratic rights of citizens to demand policy changes from the government on such a central issue.

From the civil rights movement to universal suffrage for women, from land rights to LGBTQ rights, from the anti-apartheid protests to the rights of workers to organise, campaigners throughout history have been subject to extreme repression and isolation. But time has proved that they were on the right side of history and so are the climate protestors. Any law that is set out to silence critical voices is a major threat to democracy and could set a dangerous precedent that seriously impedes the democratic work of civil society groups trying to bring about social, economic and environmental reforms.

When doing nothing costs the earth, protesting for policy change to save the planet should not, under any circumstances, be demonised and criminalised. As the great Tony Benn said,

‘The more government has influence over economic and social policy, the more democratic, open, accountable and respectful of our liberties it needs to be. Otherwise, if it is not based on the wishes of a free people, the rich and the powerful corporations will take advantage of any lack of democracy’

The Labour Party has issued a formal statement criticising the ban and several Labour MPs including Diane Abbot and Richard Burgon have extended their solidarity to the protestors.  Let’s not forget that it is this Tory government who have imposed these draconian criminal penalties on our freedom of expression, which is why it is so urgent and important to kick them out and get a Labour government in that will defend our civil liberties, not erode them and allow people to protest without the fear of prosecution or imprisonment.