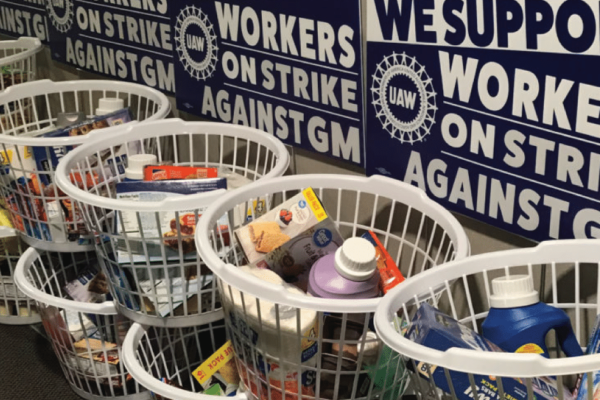 The Chicago teachers and staff, numbering 35,000, are on strike for the second time in seven years. And for a second time, the teachers’ action has helped spark a social movement. This strike questions to the long-held understanding that unions have no right to make demands beyond work conditions, pay and benefits.

The present Chicago Teachers Union (CTU) fight, like the previous one, with its almost daily mass demonstrations, two being over 25,000, takes on the feel of an anti-neoliberal battle. The union is voicing the progressive social demands of a broad sector of the population, who have seen the decay of many social services and living standards for families and for children.

The teachers want: smaller class sizes, more social workers, a nurse and a librarian in every school, and more bilingual and special education teachers and staff. They want teacher assistants, clerks and other paraprofessionals—mostly Black and Latina women—paid a living wage. They want sanctuary schools that provide defense from attacks on immigrant communities, and they want sustainable community schools that can anchor an entire neighborhood.

Chicago Public Schools enroll 361,000 students. Of these 76.6% are economically disadvantaged, 18.7% are English language learners, and 16,450 students are homeless.

The city government does not lack the funding to meet CTU demands and meet these needs. For instance, it has just approved $1.3 billion in public funds to wealthy developers to create an upscale new neighborhood. In addition, the city paid out $113 million in police brutality cases last year and $550 million since 2011. In essence, funds for children’s education is used to subsidize the Chicago elite and underwrite police brutality.

Through its contract demands, the CTU has assumed the role of spokesperson for the Chicago community, particularly the neglected neighborhoods of peoples of color. The CTU is setting an example for all unions by moving in the direction of being a tribune of the people against the 1%.

While the Chicago teachers union struggle inspires activists in other unions, the GM strike shows the great power of an industrial union.

The UAW strike against GM is not a strike against a city government but against a major corporation. It is therefore a direct challenge to profits, the lifeblood of the U.S. economic system. The number on strike is not much greater, 48,000 UAW workers to 35,000 in the teacher strike. The strike of UAW workers shuts down production, and as the strike continues, it hampers production by other companies dependent on GM products.

[GM’s plan] is to not manufacture anything in this country. They’re on their way to just take everything across the borders. And the only thing that will be left for GM in the future is the parts division that I’m in. Because you need to be able to get the parts to warehouses and then distribute them. But do I see manufacturing sticking around at all? They just want to keep throwing things into every other country, Mexico especially. They want to pay their people $3 an hour.

GM strikers, like the teachers, have wide community support because the economic insecurities they face as GM employees are the same ones corporate America inflicts on us all. But unlike the much more democratic CTU, the UAW top officials do not speak out for the needs of working people beyond their own membership.

The GM union workforce has decreased from 470,000 in 1979 to 48,000 today, but nevertheless made $35 billion in profits over the last three years. The company still owes $11 billion in bailout money to the Federal government (meaning we the taxpayers) but both write this off as a generous donation made on our behalf. The strike has cost GM $2 billion already. You may take some of that $11 billion as being our taxpayer contribution to GM while it tries to defeat our fellow workers on strike.

A Wall Street Journal article October 21 gave a clue to the economic weight of industrial workers:

U.S. factory activity overall hit a 10-year low in September after contracting for a second straight month, according to the manufacturing index published by the Institute for Supply Management. “The trade war has already done a lot of damage, and this [strike] is just adding insult to injury,” said Mark Zandi, principal economist at Moody’s Analytics. The Federal Reserve said Thursday the strike contributed to a drop in factory output last month, accounting for a 0.7% fall in production of durable, or long-lasting, goods.

A strike by industrial workers, unlike one by public service workers, or any large social protest, has a deeper impact on the national U.S. economy, and thus a much more threatening show of force against the 1% and its policies.

In both cases, the strikes have enabled the workers to feel their real strength. For auto workers they can appreciate that they are not simply a human appendage to a machine but are actually the ones with the control over corporation production itself. The CTU strikers can sense their social weight outside a particular classroom, feeling their capacity to make the government enact programs to improve the living conditions of the city’s families. These two strikes give us a sign of the role the trade unions, the most powerful organizations of working people, will play in the future.

Stansfield Smith is an anti-war activist focused mostly on combating U.S. intervention in Latin America. He was a member of Chicago Committee to Free the Cuban Five, which has become Chicago ALBA Solidarity. He can be reached at stansfieldsmith100 [at] gmail.com.
View all posts by Stansfield Smith →