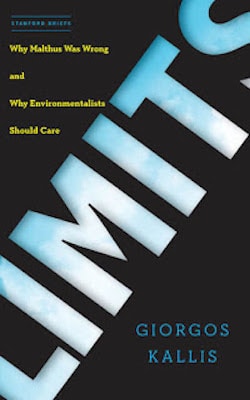 Giorgos Kallis – Limits: Why Malthus Was Wrong and Why Environmentalists Should Care

This short, readable and stimulating book begins with the author overturning perceived knowledge about the 18th century economist Robert Malthus. Malthus is best know for his extended work An Essay on the Principle of Population, an influential book that has rarely been read by those who claim to extend his ideas. Giorgos Kallis argues that it is important to understand what Malthus was really arguing for, because it is a key statement of a central tenet of modern economics, the idea of limits. In his introduction Kallis says that he aims to “reclaim, refine and defend the notion of limits” and proceeds to do just this with a critical examination of the way that limits have been understood by economists and environmentalists since Malthus’ time.

Malthus and other early priests of capitalism constructed a picture whereby unlimited human wants clash with a limited world. Scarcity and growth became an inseparable pair, with limits spurring efforts for growth. My thesis is that it is only when we begin to accept the world as abundant that we can contemplate limiting our wants and delimiting a safe space for our freedom.

How does Malthus fit into this? As I’ve argued elsewhere, and as Kallis points out, Malthus was writing from a particular position in society. In the aftermath of the French Revolution Malthus was aiming to prove that the Utopian dreams of revolutionaries everywhere were doomed to failure. His argument, crudely, was that it would be impossible to provide for everyone’s needs equally because nature is “naturally limited”. As Kallis explains:

Malthus conceives of a world that is naturally limited because the needs of our bodies are naturally unlimited. Here is a conception of nature that lies at the heart of modern economics and, to an extent, environmentalism.

Paradoxically, given how he is remembered, Kallis says that Malthus “did not claim that population growth must be limited”. Instead, Malthus was a “prophet of growth” arguing that a happy nation is one where “population grows”. Helping the poor for Malthus was undesirable because it gave them, according to Kallis, access to “leisure” that they did not deserve as they had not worked for it. I don’t particularly disagree with this reading of Malthus, though I do feel the author doesn’t quite get to the heart of the contempt that Malthus had for the poor. To quote Malthus himself:

With regard to illegitimate children.. they should on no account whatever be allowed to have any claim to parish allowance… The infant is, comparatively speaking, of no value to society, as others will immediately supply its place.

We cannot, in the nature of things, assist the poor, in any way, without enabling them to rear up to manhood a greater number of their children.

It is no wonder then, that Friedrich Engels argued that Malthus’ ideas had become the “pet theory for the genuine English bourgeois… since it is the most specious excuse for them.”

Unfortunately modern environmentalism has become dominated by the bourgeois explanation for the state of the world. The 1960s saw a number of environmental writers, such as Paul Ehrlich, who “retained the idea of a limited world that would clash with exponential growth.” Unlike Malthus though, the limits Ehrlich and friends were concerned with were natural resources, food, drinking water and so on, rather than the nature of people to over-procreate. This Kallis contrasts with the views of some societies that saw natural resources, such as the Yaka people who see the forests they live in as abundant, because their “social relations… do not spur conquest and depletion”.

Here Kallis turns the idea of limits on its head. Instead of being real physical things fixed in nature and physics, limits are the product of particular cultural and social approaches and understandings. He says:

The limit resides in the subject and the intention, not in nature, which is indifferent to our intentions. And it is our intentions that should be limited. A mature, autonomous civilisation would be aware that nature is not a strict mother who imposes limits and tells us what we have to do. But this doesn’t mean we can do whatever pleases us… It is our actions that have consequences that we might or might not like, and which we have to limit with an eye to the consequences of not doing so.

Kallis isn’t setting out a precise approach to limits – indeed he asks rhetorically later, “do I want limits to everything?… clean energy or education?” What he is trying to get the reader to do is to approach the question from a different direction and that is one that arises out of understanding the limits imposed by the nature of society itself. Capitalism is, he points out is one were there is “accumulation-economic growth without limit”. And this is, what needs to be limited.

Given the similarities between Kallis’ arguments and some bits of Marx and Engels, I was surprised to see his brief discussion on socialism. Here Kallis summarises Marx and Engels as saying that socialism would be a better system at “setting and sharing limits” and that they followed this up by arguing that “socialism can somehow develop production more rationally than capitalism… Socialism, on this view would supersede the land, resource,or population limits faced by capitalism because it would be rational and superior technologically.”

Kallis points out that if such a system simply wanted to satisfy needs “similar to capitalism” then it doesn’t matter as it would be as destructive. But this is a simplification of Marx and Engels’ work in understanding how and why capitalism destroys the environment and their solution. But the two Communists had a vision of a completely different relationship between humans and the world around them under Communism than under capitalism. The metabolic rift that takes place under capitalism, would need to be healed through the conscious rational management of the metabolic relationship between society and nature. Marx noted that people who develop

In building a new world, people will thus transform their understanding of the world and their place within it, and create a new way of approaching society and nature. Revolutionary transformation will create a new, revolutionary, consciousness that is more than simply workers control of factories.

One of the problems with trying to comprehend the nature of the limits we require in the face of environmental catastrophe, is that the current system is so destructive that it obscures what might be. In order to have a rational discussion about the limits (or none) that society needs or must impose, we have to clear away capitalism.

There are important discussions to be had about the type of environmental politics and ecological economics that we need. Kallis points out that history will continue whatever we do, though I’d add that humans might not be there to partake in it. But if humanity is to have a future we need radical thinking, and Giorgos Kallis’ book offers us a thought-provoking approach to an age old debate.