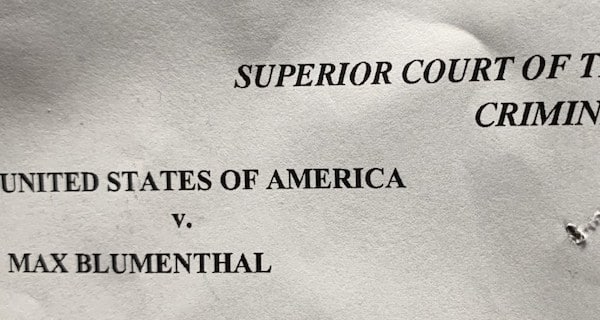 When we think “immigrants in America” we rarely consider those who are privileged and weaponized in service of American Empire. The attack on Max Blumenthal by Venezuela’s ex-ruling elite diaspora–which has been key to pushing regime change in Venezuela–is such a clear example of that: the use of a rightwing emigre as a legal/physical weapon against a journalist. It’s a weapon designed to intimidate and silence him and his colleagues at The Grayzone–especially Anya Parampil, who has been doing amazing work on this issue.

I was arrested on Friday on a COMPLETELY FALSE charge manufactured by the Venezuelan opposition related to their siege of the embassy in DC. I spent 2 days in jail, was shackled for extended periods & was denied my right to call a lawyer. Here’s the facts: https://t.co/2Nco0OzQ7P

As the Lawyer’s Guild pointed out, Max Blumenthal’s “arrest took place hours after The Grayzone issued a report on USAID funding to lobbyists for the Venezuelan opposition.”

I’ll be writing more on this. In the meantime, here’s a rundown of what happened:

Max Blumenthal, the editor of the news site The Grayzone, was arrested on the morning of October 25 on a fabricated charge related to the siege of the Venezuelan embassy in Washington, DC that took place between April and May.

A team of DC police officers appeared at Blumenthal’s door at just after 9 AM, demanding entry and threatening to break his door down. A number of officers had taken positions on the side of his home as though they were prepared for a SWAT-style raid.

Blumenthal was hauled into a police van and ultimately taken to DC central jail, where he was held for two days in various cells and cages. He was shackled by his hands and ankles for over five hours in one such cage along with other inmates. His request for a phone call was denied by DC police and corrections officers, effectively denying him access to the outside world.

Blumenthal was informed that he was accused of simple assault by a Venezuelan opposition member. He declared the charge completely baseless.

Court documents indicate the false charge of simple assault stems from Blumenthal’s participation in a delivery of food and sanitary supplies to peace activists and journalists inside the Venezuelan embassy on May 8, 2019.

The charge was manufactured by a Venezuelan opposition member who was among those laying siege to the embassy in a sustained bid to starve out the activists inside.

“I was not party to any violent actions around the Venezuelan embassy,” Blumenthal reiterated. “This ginned up claim of simple assault is simply false.”