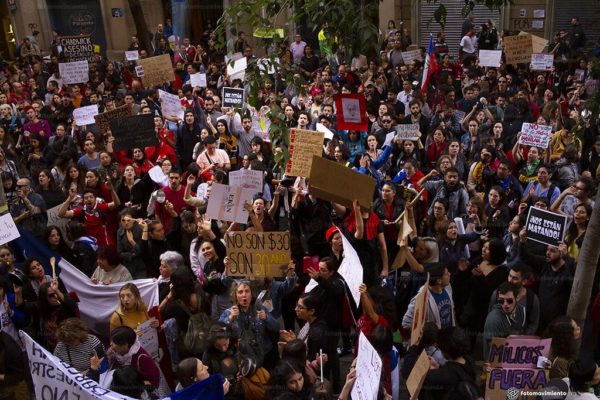 The slogan is pithy—Neoliberalismo nunca más (Neoliberalism Never Again). It was chanted in the streets of Santiago, Chile; it was drawn on the walls in Buenos Aires, Argentina; and in a more sober register, it is mentioned in a seminar in Mexico City, Mexico.

Elections and protests rattle the continent. The protest by Chilean students against metro fees has now become a general protest against the government. In Colombia, the right wing suffered significant defeats in the local elections. Bogotá’s mayor is now Claudia López, the first woman, the first gay woman, the first gay woman from the Green Party to win the post; the mayor of Bogotá is the second most important person after the country’s president. In the town of Turbaco, near Cartagena, a former guerrilla from the Revolutionary Armed Forces of Colombia (FARC)—Guillermo Torres or “Julian Conrado” won the mayor’s post. This is the first time that FARC—which had been in an armed struggle for over half a century—won such a significant election (they now joke in Venezuela that FARC has more mayors than Juan Guaidó—the man set up by Washington to overthrow Nicolás Maduro).

In Argentina, the electorate tossed out the government of Mauricio Macri, who had taken his country to the International Monetary Fund (IMF), produced a harsh austerity budget, and then disregarded the pain felt by his compatriots. If Haiti and Ecuador simmer with “IMF Riots,” Argentina had an “IMF Election.” The incoming government of Alberto Fernández and Cristina Fernández de Kirchner promises an exit from neoliberalism. Argentina’s external debt is at about $285 billion, just under $6,500 per person. This foreign debt is almost 75 percent higher than when Macri took office in 2015.

In August, Fitch cut Argentina’s rating to CCC, slipping closer and closer to the dreaded D rating. As an exporter of minimally processed food, Argentina is dependent on prices set elsewhere—a victim, as are many countries that export raw materials, of the financialization of commodity prices. It has imported expensive debt and exported low-priced foods.

Forty years ago, the propertied classes revolted against any social democratic arrangement in their countries. As a result of fears over capitalist turbulence, Keynesians argued that the state must intervene to smooth over the instability of the business cycle. Pressure from the workers’ movements and the Left forced governments to finance social security, education, health care, and elder care. Funds for state intervention and for social spending came—largely—from progressive taxation. The rich no longer wanted to make these payments. One of the earliest countries to undergo a neoliberal transformation was Chile.

As the rich withdrew from taxation, governments—of a variety of political persuasions—struggled to fund their own borrowing and the social spending won by the workers. Multilateral organizations—such as the IMF—and ratings agencies punished countries that had high deficits; this is why many countries passed balanced budget amendments that prevented borrowing to pay for social spending. A combination of the tax strike by the rich and the balanced budget amendment squeezed government spending.

To raise funds, governments did at least five things:

This remains the core of neoliberalism. It has wrecked the world. It is why they are saying “never again” to neoliberalism in the ballot box and on the streets of South America.

The new government has pledged to abandon the road of austerity, to robustly fund the social commitments of the government, and to adopt a national development strategy. How it will do so with the massive debt overhang and the expected pressure from the creditors and the multilateral organizations is to be seen.

In Argentina, debates around the exit from neoliberalism have been ongoing; the recently released book Salir del Neoliberalismo (Exit Neoliberalism) captures the thrust of these debates. In his essay in the book, Claudio Katz lays out four different scenarios for Argentina, which include a repetition of the story of Portugal and of Greece. Toward the end of his essay, Katz says that the cost of the crisis should not be borne by the public but by the authors of the crisis—namely, the creditors. An audit of the enormous $57 billion IMF loan to Argentina is necessary; so too is a suspension of payment to service that debt. Drawing from Katz, one can go further:

Such means—fairly straightforward—should be part of a national debate about tax revenues and subsidies to corporations. If subsidies are suspended and if taxes are collected, there should be enough money to finance not only food sovereignty schemes that tackle endemic hunger, but also cooperative production for food and goods.

We are in a period of transition. There is no doubt that the ruling classes have no idea how to solve the problems posed by capitalism—massive wealth, massive inequality, climate catastrophe, and war. Neoliberalism, their policy framework of the past 40 years, is now in serious crisis. No full alternative is available. We have glimmers of the future; experiments need to be tried. Argentina’s government will be under pressure to test an exit to neoliberalism. There will be excluded workers and feminists in the streets making sure that it does not betray their hopes.

Culturalism, Naturalism, and Social Metabolism
Dossier 22: Latin America and the Caribbean: between the neoliberal offensive and new resistances