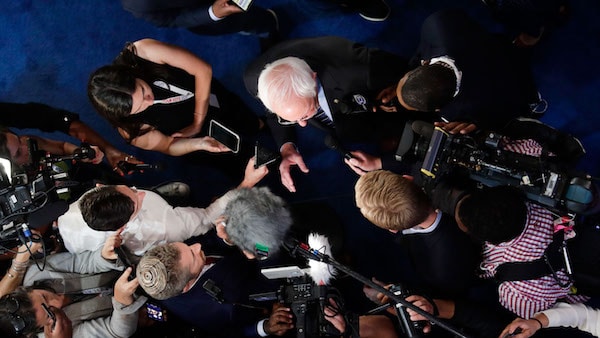 Bernie Sanders has certainly ruffled many feathers during his presidential campaign run. The Vermont Senator is very much still an outsider in Democratic politics, but he has managed to build a huge groundswell of support around key ideas like Medicare for All, a Green New Deal, a federal jobs guarantee and free public colleges for America.

Sanders formally declared his candidacy in February 2019, raising a record $6 million in 24 hours from nearly a quarter-million donors. His supporters tend to come from backgrounds that do not traditionally involve themselves in politics; among the most common professions that donated to his campaign are teachers, nurses, drivers and servers. Starbucks, Amazon and Wal-Mart are the most common employers of his backers, and the average donation to his campaign is only around $27.

This is in complete contrast to many other top candidates. Joe Biden, for instance, began his campaign with an event with 100 or so extremely wealthy donors in Manhattan claiming that billionaires like them were being unfairly “demonized” and promising “nothing would fundamentally change” under his presidency. “I am not Bernie Sanders”, he emphasized to the elite audience, “I need you very badly.

Even in 2016, Sanders’ campaign was treated by the mainstream press as an unwelcome incursion into the cozy world of elite politics where Hillary Clinton was considered the rightful president-in-waiting. The Washington Post, for example, ran 16 anti-Bernie stories in a 16-hour stretch in March, while major cable networks, including CNN, MSNBC and Fox News cut away from Sanders’ speech discussing issues affecting ordinary Americans to show an empty Trump podium.

But the media’s generalized hostility towards the progressive wave threatening to sweep over the Democratic Party has reached new heights in 2019. An unusually frank example of this was when MSNBC analyst Mimi Roach declared Sanders “made her skin crawl,” claiming he is not a “pro-women candidate”. This despite the fact that Sanders draws the support of a higher proportion of women than any other Presidential hopeful.

Fact-Checking as a Weapon

Media have also been more subtle in their attacks on Sanders. One method has been to attempt to fact-check him into oblivion, constantly challenging his every pronouncement. However, they have been unable to catch him out on much, often resulting in bizarre, self-contradicting nitpicking. The Washington Post insinuated that he was misrepresenting a booming economy claiming his comment that “millions of Americans are forced to work two or three jobs” was “misleading” because, despite agreeing that 8 million Americans do work multiple jobs, some were only “part time”–as if Sanders were claiming that millions of people have 120-hour workweeks–and that 8 million only amounts to 5% of the workforce. To be a remotely accurate factcheck, one has to believe that 8 million does not count as “millions,” and part-time jobs are not real jobs.

The Post also gave Bernie’s statement that six people (one of whom is its owner, Jeff Bezos) have as much wealth as the bottom half of the world’s population three Pinocchios, the classification just below the most blatant lie. Despite finding that it was completely true, it argued that most of the wealth of the world’s richest was tied up in stocks, which are likely to fluctuate. How this was meant to disprove Sanders’ statement was not explained.

It also attacked the idea that the Vermont Senator was supported by an army of mass donations from ordinary people. The title, headline, “Bernie Sanders Keeps Saying His Average Donation is $27, but His Own Numbers Contradict That,” calculated that the average donation was actually $27.89. What a contradiction! However, the majority of people do not read past the headline, meaning most of those who saw the well-shared article would have no idea how weak the charge was.

CNN has also tried to use fact-checking as a weapon against Sanders, excoriating him for making “the same false claim about health spending for ten years.” It used his quote that said that the U.S. spends twice as much on healthcare as any other country, noting that there were a handful of European states that spent (slightly) more than half of what the U.S. spends (it did not note that those states have vastly better health outcomes). After an outcry on social media, CNN amended the story, conceding that it is indeed accurate to say that the U.S. spends over twice as much as other economically advanced countries, thus walking back their “factcheck” to a minor technicality.

Worse still, earlier this year CNN itself ran a news piece titled “US Spends Twice as Much on Healthcare as Its Peers,” which accurately described the U.S. as an “outlier,” spending vastly more than others due to the higher cost of drugs, more expensive treatment and exorbitant administration fees. Thus, in its attempts to go after Bernie, it accidentally undermined its own reporting.

Meanwhile, the Democrat-aligned network MSNBC has developed a bad habit of forgetting how numbers work–when it comes to Sanders, that is. In July, its graphics team decided Sanders’ 49% support was lower than Kamala Harris and Elizabeth Warren’s 48%, placing him fourth in a list of Presidential hopefuls. This is far from an isolated incident: one week later it did almost exactly the same thing. It also reported that Sanders’ support had dropped 5 points when, in fact, it had risen the same amount. And when polls show Sanders to be in the lead, media has simply awarded extra support to others to overtake him, or switch Sanders’ numbers with another candidate, ensuring the same outcome on screen. CNN was only slightly less deceitful when it accurately showed Bernie leading Warren by 3 points, but their headline read that there was “no clear leader” and Sanders and Warren were “neck and neck.”

Viewers at home – u need a laugh track –
Don’t turn it off during commercials – cause pharma insurence /Wall Street companies they are shilling for are paying for them @Inc02 @CNN “No Clear Leader” Danger headline #bernieblackout @BernieSanders pic.twitter.com/IZpVaAUy2Z”

The media has also made a great deal of Sanders’ health problems, constantly emphasizing his age and fragility. It was in that context that CNN stands accused of fiddling with their color scale to present his face as a ludicrously dark shade of red-purple (suggesting serious ill-health) when he was discussing his surgery. This “Beetroot Bernie” shade jars with other images and videos from the event, including from the Associated Press.

This photo on the left is from the AP and ran in a @guardian piece. The image on the right is how @CNN color corrected Sanders. Notice a difference? h/t @QueenInYeIIow @greg06897 pic.twitter.com/lcbgA2GMR2

From Bernie Baiting to Bernie Blackout

In recent weeks, corporate media seem to have moved from anger to denial, appearing to collectively decide Sanders does not exist. The Hill, for example, published the results of an Emerson College survey with the headline “Trump beats Warren, Biden in Iowa Matchups.” But, as many pointed out, the most important news from the poll (buried in the report) was that Sanders was leading Trump in that state. There was no mention of Bernie in a recent New York Times article on the frontrunners. Likewise, the coverage of his enormous New York rally, where he was formally endorsed by rising Democratic star Alexandria Ocasio-Cortez and other members of “The Squad” was sparse, to say the least.

The #BernieBlackout is in full effect. Not A WORD on any of the front pages of 4 major papers about #Bernie2020 or the #BernieSquad endorsement. @AOC‘s was the most sought-after endorsement of the primary. And yet…? If she’d endorsed Warren, different story. cc @krystalball pic.twitter.com/I5Teyhiyoz

A new University of North Florida (UNF) poll took the Bernie Blackout to new levels, however. In a poll of Democratic candidates vs. Donald Trump and/or Mike Pence, the UNF did not even include Sanders, despite featuring candidates with far less support, such as Kamala Harris and Pete Buttigieg. When asked why this was, its Faculty Director, Michael Binder, claimed that it was for reasons of “diversity.” Why the Jewish socialist is any less “diverse” than, for instance, Buttigieg, was not explained.

A woman in the lab who ran the test received a very different answer from Binder. When she insisted Sanders was at least a top 3 candidate, he allegedly replied: “not for long.” Thus, those in power have pre-emptively decided Bernie is not a serious candidate and a Buttigieg-Pence election (following a Republican Senate impeachment of Trump) is a more likely scenario than Sanders, one of the most popular and by far the most donated-to candidate, winning the Democratic nomination.

Guests who do not toe the “correct” line also claim to have been blacklisted as part of the blackout. Josh Fox, the Oscar-nominated film director and activist, claims to have been barred from MSNBC in 2016 for his support of Sanders. Since he declared for him, his status went from regular guest to never invited on, something he claims is far from a coincidence.

On press bias, Bernie claimed that corporate media’s billionaire owners might be swaying the coverage of his campaign to an overly negative tone. This assertion was indignantly described as “ridiculous” by CNN’s Chris Cillizza and a “conspiracy theory” by Washington Post Executive Editor Marty Baron. Yet the public is far more skeptical. Trust in media has been falling since the 1970s, and particularly in the last few years to the point where less than one-third trust the news media, even most of the time and nearly three-quarters of Americans agree that traditional media consistently report false or purposefully misleading stories. Therefore they are likely ready for the media hysteria to be ramped up to new levels the closer Sanders gets to power.

Alan MacLeod is a MintPress contributor as well as an academic and writer for Fairness and Accuracy in Reporting. His book, Bad News From Venezuela: Twenty Years of Fake News and Misreporting was published in April.