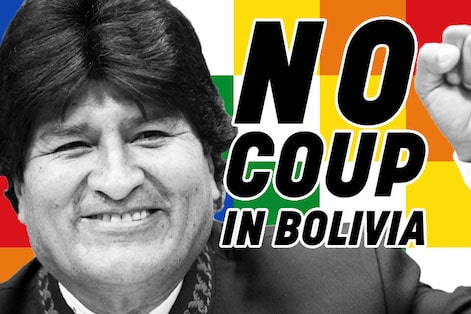 Imperialist imprint in the just carried out Bolivia coup is visible.

Donald Trump, the U.S. President, has said in a statement:

The United States applauds the Bolivian people for demanding freedom and the Bolivian military for abiding by its oath to protect not just a single person, but Bolivia’s constitution.

Who these “people” are? The fascists, the rich, the appropriators, and the lumpen elements money of the rich hired. They are not the poor, the dispossessed, the humble, the sections of the Bolivian society with whom Evo Morales was striving to organize a humane society.

What’s the character of “freedom” being secured through the coup? It’s freedom of capital, national and imperialist, to appropriate and loot the people and natural resources. And, it’s the freedom to tie the country into imperialist war-plan–strategic and tactical–against the peoples of Latin America.

The White House issued the U.S. presidential statement that began with the following sentence:

The resignation yesterday of Bolivian President Evo Morales is a significant moment for democracy in the Western Hemisphere.

Morales’s departure preserves democracy and paves the way for the Bolivian people to have their voices heard.

Can anyone claim the forced–unconstitutional–ouster of an elected president preserves democracy? Can anyone cite a single example of trampling a people’s verdict lets people’s voices heard in any country, from any page of history-book, from real life experience? Shall any imperialist state accept such act within its political mechanism? No, and never.

What was the “people’s” voice heard in Bolivia on its streets, in front of and in elected official’s residences? For weeks, the streets were blocked. The streets saw vandalism with full force, mob violence to its extreme. Elected officials, at least one of them was women and from indigenous community, were threatened, howled at, beaten, assaulted, dragged out of office, humiliated. A part of media has carried those photos. At least one people’s representative, a woman, was confined in a town hall while the hall was set on fire. She was allowed to leave the alighted building after the fire raged around. Even, this “people”–a fascist gang–set the residence of Evo’s sister on fire. Even, Evo’s residence has been vandalized and looted.

Shall any elected or, imperialism-backed dictator, without people’s mandate, accept–allow the vandals–to carry out a small fragment of such acts in any part of their country, with any of their elected officials? Shall they allow this in any case of any sibling or offspring of any of their the elected officials? Shall any imperialist state allow burning of governors’ houses within their country or within their legal jurisdiction? Residences of two governors in Bolivia have been burnt by blood-hounding mob, fascist in character, hired with money. Imperialism doesn’t consider legal jurisdiction.

Unilateral decision and declaration about deployment of U.S. forces in and actions of the forces around the oil fields in the Kurdish region of Syria is the latest example of imperialist way of “respecting” or “abiding” by law–domestic and international. Has imperialism heard and accepted the voice raised on the floor of the UN General Assembly, only days ago, on the question of U.S. imposed economic blockade against Cuba? It’s the longest ever economic blockade by the most powerful country against a geographically small island-country. The UNGA vote was overwhelmingly against the imperialist act. Only three member-states of the UN including the U.S. voted against the resolution. Audience of global media knows the way Jane Fonda was arrested in Washington DC. She stood for climate–a climate within which people can breathe, can live, and shall not have to abandon their homes, hospitals, schools, agricultural lands and mangrove forests, and cases, cities. Was the voice been listened?

Now, imperialism is delivering sermon–hear “people’s” voice! Is this–the mobocracy and the imperialismocracy in Bolivia over the last few weeks–the way to let people’s voice heard?

According to the “Statement from President Donald J. Trump Regarding the Resignation of Bolivian President Evo Morales”:

These events send a strong signal to the illegitimate regimes in Venezuela and Nicaragua that democracy and the will of the people will always prevail.

The recent political developments in Bolivia are a strong signal, no doubt. It’s a strong signal to, as the statement identifies, “illegitimate regimes in Venezuela and Nicaragua”.

And, the U.S. President said with a confident tone: We are now one step closer to a completely democratic, prosperous, and free Western Hemisphere.

Coup against Evo by imperialism pulls imperialism, a mighty machine, closer to democracy! It’s not paradox. It’s contradiction and contradictory in real sense. A mighty machine motivated to subjugate the world is against a man committed to organize a humane life for the exploited people in his country. The machine is so powerful that it was failing to proceed to its cherished “democracy” because of a man, a revolutionary. Does it show might of the machine? The machine knows its weakness.

That’s the reason the machine had to conspire with elites, the most minor part of the society, and a few armed officers commanding an armed force, but having no people’s mandate and depending on the people to pay for their salary, and for arms and ammunition with which these armed persons are trying to trample the people.

Thus, the imperialism imprints its intervention in Bolivia, in the life of the people of the commoners of the Andean country.

The Hill has said the truth with the following heading: “Trump celebrates resignation of Bolivia’s president” (by Brett Samuels, November 11, 2019). It’s celebration, to imperialism! What’s the cause of the celebration? Evo is absent. But, Evo’s absence is for today only. Tomorrow he will come back with his people.

President Trump on Monday hailed the ouster of Bolivian President Evo Morales as a ‘significant moment for democracy’ even as Morales’s supporters and some U.S. lawmakers likened it to a coup.

The Washington Post has said in its report on the coup in Bolivia:

The heads of the armed forces and police withdrew their support for the government in recent days amid escalating protests.

Shall the WaPo accept such move by leaders of the armed forces in cases where its interests sleep?

What democracy they are dreaming?

It’s coup-plotters’ democracy. It’s planned to be a democracy of elites, the rich. So, the coup-project is being led by a businessman, Bolivia’s Guaido and Bolsonaro.

The coup-machine–has already started moving through the near-empty streets of La Paz and of other cities. Activists are being hauled, hands cuffed, blindfolded, kneeled, arrested. A Reuter’s photo captioned: “Members of the security forces patrol a street, at the Murillo square, in La Paz”. Enough to perceive the situation.

Before the coup formally unfolded, the coup plotters unleashed hoards of lumpen elements, and those petty-soldiers were kidnapping people, engaging with arsons, threatening political leaders, blocking roads. Shall the Empire allow this in its own territory? Never, never.

What’s in view now there in Bolivia? The Camacho and Mesa duo have spelled out nothing clearly. Their current agenda is repressing the Evo-supporters. They are still relying on violence with their armed goons, and the armed forces and police.

The ringleader in this coup is Bolivia’s Guaido-Bolsonaro–racist, misogynist Camacho–with heavy fortunes in his own pockets and in family coffer. His family is connected to secessionist and far-right anti-democratic activities and enterprises in Bolivia. Imperialism has correctly appointed its orderly in Bolivia–a rich appropriator.

There are the famous NED and IRI, the long arms for imposing Washington-designed “democracy”, activities in countries. U.S. Dollars, millions as their reports show, have been channeled in Bolivia over the years to “seed” their “democracy”. Who knows about activities of their brother “Enterprise” and “Free Labor Unions” to organize their friendly businesspersons and a group of “labor” leaders, lumpen in character? All they do is: Promote rightist agenda.

There are reports of conversations between the Empire leaders and the coup soldiers.

One side, imperialism and its orderlies, thus, are there in Bolivia.

On the opposite, there is Evo. He said during resigning his post: “My sin is being a union leader, indigenous.” He led in imbibing the people with a sense of dignity. He led in the initiatives to lift up 3 million people out of the pit of poverty. The country was the region’s fastest growing economy. He nationalized sectors/enterprises lucrative to imperialism. And, he kicked out U.S. military bases. He represented the commoners.

His is the class war camp of the exploited. Evo’s moves, political and economic, are enough to make imperialism his enemy. So, imperialism has intervened in Bolivia. It may turn more forceful. Nevertheless, the intervention will, hopefully, stumble; because of the state of politics the people there are pursuing since long.

Are other countries including a number of South Asian countries free from similar intervention-possibility? Not at all; not even in any dream. Rather, probably, in some rooms in the Empire’s palace, similar conspiracies for intervention are being hatched, and preparations are going on in full swing.