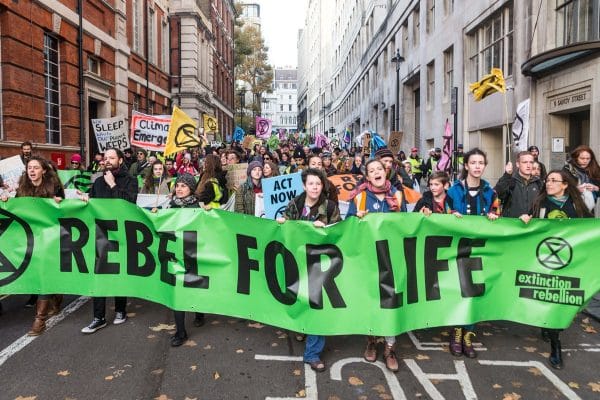 Extinction Rebellion- Rebellion against whom?

In the past year, we have seen an explosion of the environmental movement. Through the global climate strike and mass demonstrations for the planet launched by Greta Thunberg, an entire generation has gotten a taste of political action, understanding the need for dramatic change to deal with environmental degradation. It is in this context that the group Extinction Rebellion (XR) has struck a chord. For many, both young and old, the urgency of the situation requires drastic solutions, and many have therefore been seduced by the group’s actions and its calls for immediate measures to save our planet. But are XR’s methods what the climate movement needs? What exactly does XR stand for?

Extinction Rebellion, which describes itself as “an international apolitical network using non-violent direct action to persuade governments to act justly on the Climate and Ecological Emergency”, was launched in the UK in October 2018. Since then, the group has successfully positioned themselves as the organization to join for youth who want to fight climate change. Since the first “Rebellion for the Climate” last April, which was hardly noticed outside of the UK, the organization has propagated itself across the world. Only a few months later in October, XR organized an “International Rebellion” in 60 countries, which propelled the group into the headlines.

Like gas quickly expanding in a vacuum, XR is filling a political void. It offers a change of pace from environmental NGOs like Greenpeace and the WWF, which are nothing but cash grabs whose main aim is to perpetuate their operations, rather than have a decisive impact on the world. Meanwhile, the parties on the left struggle to adapt their message to the radical state of mind and sense of urgency which prevails among the youth. As for the trade unions, for the most part they still ignore the climate movement. With no competition, and a seemingly-radical approach based on “civil disobedience”, XR has been able to channel young people’s desire to fight.

During their “October Rebellion”, XR activists organized direct actions in nearly every major city in the Western world. They blockaded bridges and roads, in Montreal, London, Paris, and Sydney, carried out symbolic actions such as the “die-ins” in New York, and held occupations in Paris, Berlin, The Hague and elsewhere. The stated aim of these actions has often been to get arrested. In an interview with Libération, Roger Hallam, the co-founder of XR, explains this strategy:

[…] When people break the law, there is a strong likelihood that this will create a public debate and that we will talk about social protests. Activists will be respected because people will see how committed they are to environmental preservation since they are prepared to be arrested. 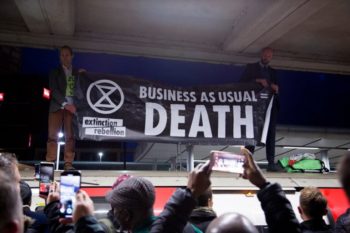 But what does XR hope to accomplish with this civil disobedience? The “Our Strategy” section of XR’s website doesn’t clarify the question. It says, “We are promoting mass ‘above the ground’ civil disobedience–in full public view. This means economic disruption to shake the current political system and civil disruption to raise awareness.” However, it is not clear what political changes they are trying to shake out, nor what should actually be done once everyone has been made aware. The organization’s three demands are that the government tell the truth about the ecological and climatic situation, that it act immediately and that it create a “citizens’ assembly.” Not a word on what kind of action the government needs to take to fix the crisis.

XR describes itself as “apolitical,” or “beyond politics.” That is to say that it avoids associating itself with a particular political party or ideology, with the aim of attracting as wide a base of support as possible, without alienating anyone. “It is our goal that every individual is welcomed regardless of ethnicity, race, class, gender, gender identity,” etc. (our italics). According to Ronan Harrington, the coordinator of XR’s UK General Election Strategy Group, remaining neutral allows, “the possibility of all parties outcompeting each other to meet us where we are.” This is why XR invited Stanley Johnson, former Conservative Member of the European Parliament—and father of Prime Minister Boris Johnson!—to address a London demonstration during the October Rebellion. Here Johnson took the opportunity to declare, without any sense of irony, that Margaret Thatcher was the founder of the British environmental movement! Harrington said,

This is the first truly shared global crisis […] It can’t have a left-wing solution.

But since the vast majority of people motivated to fight for XR’s ideals come from the left, in practice XR’s “apolitical” approach means censoring messages it considers excessively left-wing. The Economist reported that the XR media team removes any tweets deemed too political which sneak into its account, such as one saying, “this movement is the best chance we have of bringing down capitalism.” In France, the Yellow Vests were shocked to see XR members erasing graffiti denouncing police violence. We saw this approach develop into absurdity with the banning of XR socialist sub-groups while sub-groups for XR police and XR landlords are allowed.

According to Harrington, “there is no real enemy”. XR’s website states that, “blaming and shaming will not serve us in the long run.” This is a lie. Those responsible for the climate crisis are identifiable. They can be found in bourgeois political parties and sitting on boards of directors of corporations and banks. The essence of XR’s apolitical approach is to offer impunity to the guilty in exchange for their support. It is not surprising then that XR is able to garner so much good will amongst millionaires and billionaires. Searching through the financial documents made available online by the group itself, we see that its biggest individual donor—contributing £323,000 ($550,000 CAD)—is the Climate Emergency Fund, an NGO founded by Rory Kennedy (daughter of U.S. Senator Robert Kennedy), Aileen Getty (heiress to an oil fortune) and Trevor Neilson (“philanthropist” investor close to Bill Gates). Another major donor is billionaire speculator and hedge fund manager Chris Hohn and his foundation, The Children’s Investment Fund Foundation.

In fact, even though XR pretends to be “apolitical”, the group’s attitude towards the state is certainly a political one: they refuse to call into question the caste of politicians in power, and their guard dogs in the police. XR affirms, “We take a no blaming and shaming approach to the police […] Our vision for Extinction Rebellion puts love at the heart of change. In this way some people in Extinction Rebellion may choose to express gratitude and love towards police officers.” During a rally in memory of Adama Traoré, who was killed by the French police in 2016 during an arrest, XR’s activists unfurled a banner which read “United against all violence”—equating racist systemic state violence with the isolated violence of oppressed groups lashing out against the police!

The main political demand of XR, the citizens’ assembly, demonstrates this kowtowing before the state. One only needs to read the “Three demands bill”, which the British section of XR wants Parliament to adopt, to understand this. Thebill provides for the creation of a citizens’ assembly by the government, but invests it with little more than advisory powers. So we are expected to leave it to the same politicians who have done nothing when confronted with the climate emergency to create this assembly, which is supposedly the source of a radical change, and to listen to its recommendations if it suits them. This is not apolitical!

Rely on the workers, not the millionaires 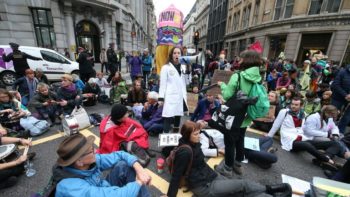 A majority of XR’s activists and sympathizers certainly consider themselves to be left-wing, as reflected in certain declarations. The group states that, “we can’t look to government to solve the world’s problems. It tends to concentrate power and wealth in the hands of a very privileged few…” Its “Ten Principles” express several other accurate critiques, such as, “The world is deeply unequal, with wealth and power levers concentrated in a small minority,” that a “full system change is needed,” and that the “media [is] captured to the interests of exploitative rich people and corporations.”

These elements of XR’s principles point in the right direction. In reality, the fight to protect the planet from climate change needs to be a fight against capitalism, against the minority who enrich themselves off of unabashed exploitation of the environment and the workers. The capitalists have zero interest in undermining their own power or the wealth it is based on. But criticizing governments, the media and the wealthy few is diametrically opposed to the methods of the XR leaders who court right-wing politicians and millionaires. While a segment of the ruling class has taken an interest in the environmental movement, the fact is that they are ultimately driven by their need to steer that movement into safe channels–channels which don’t challenge class rule. In opening the door to them, XR is inviting the fox into the henhouse.

The climate crisis will particularly harm workers, the poor and the oppressed. These are the people who have every interest in fighting against climate change, and creating a socio-economic system which will put an end to the reckless human destruction of the natural world. Furthermore, the working class possesses an incredible power because its primary function is to make the economy run. No working class? No food, no electricity, no transportation, no communication, no production. For this reason, the movement for the planet must be based on the working class.

XR says that their acts of civil disobedience aim to raise awareness among the population. But while it is true that there is an organized reactionary campaign to deny climate change, the majority of the population is already aware.. Greta Thunberg’s “climate strikes” have mobilized millions of people across the world, including 500,000 in Montréal on Sept. 27, making it the biggest set of mass rallies in the world since the protests against the Iraq War in 2003. The real challenge is not to raise awareness, but to direct it; to mobilize the workers on a class basis with a clear program. Roger Hallam argues that, “mass civil disobedience is the most effective way to bring about change at the political level.” In a sense, this is true. Mass action of the working class, like strikes, can raise the workers’ consciousness and give them confidence in the struggle against the bosses. On the other hand, actions based on a handful of activists blocking a bridge in the middle of rush hour (as in Montreal) or public transportation,(like in London) run the risk of alienating exactly those people who need to be convinced to join the battle. All they do is feed the idea that the environmental movement is led by a small number of out-of-touch hippies who don’t care about ordinary people.

To be won over, the workers need to see how the fight for the planet directly affects them. A socialist program allows us to link the needs of workers with the reduction of carbon emissions. By expropriating the incredible riches of the parasites in power, we could: invest massively in the development of free high-quality public transportation, create a massive program of public housing based on sustainable energy, develop renewable energy sources at low cost to consumers, nationalize polluting industries and transition to green technology while providing free professional training to the workers in these industries, and more.

It is not the direct actions of a minority that will ensure the success of the environmental movement, but the active participation of the working class. The workers must take control of the entire economy, which is the source of environmental destruction, and organize it democratically and ecologically to meet the needs of everyone, rather than for the profits of the capitalists. For a rebellion to be worthy of its name, it must aim at overthrowing the capitalist system.