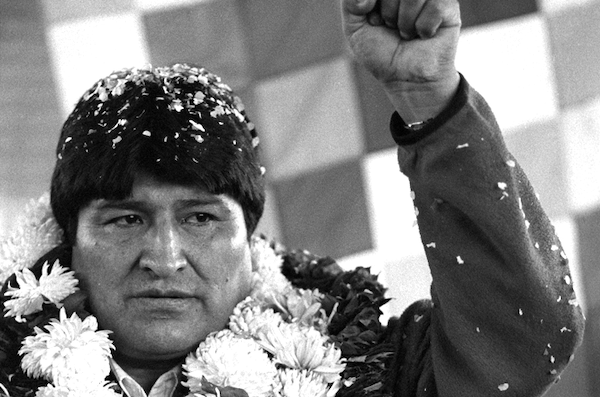 Behind the Racist Coup in Bolivia

Yesterday, Sunday November the 10th, at approximately 4pm (eastern standard time) the democratically elected president and vice president of Bolivia, Evo Morales and Álvaro García respectively, were forced to resign from power. This was no voluntary resignation as CNN, the New York Times and the rest of the corporate media is reporting, nor has it been accepted by the Legislative Assembly as required by the Constitution of Bolivia.[1] This was a coup that employed threats and brutality against Morales, García, members of the cabinet, congressional representatives, and their families. Both the commander in chief of the military and head of the Bolivian Police requested, in no uncertain terms, the resignation of Morales.[2] The coup forces, led by Pro-Santa Cruz Committee president Luis Fernando Camacho, continues to target Movement for Socialism (MAS) activists, progressive social movements, and Indigenous peoples of Bolivia.

Behind the Misleading Headlines

The corporate press has predictably given one-sided coverage of the unfolding situation in the Plurinational State of Bolivia, a resource-rich Andean nation of 11.5 million, of which approximately 50% are Indigenous [3]. While the mainstream media act as cheerleaders for the unrest in Hong Kong and magnify any sign of discontent in Venezuela or any other country perceived by the U.S. government as “enemy”, it has largely ignored the popular uprisings in Haiti, Chile, Ecuador and beyond. Now, in the case of Bolivia, conservative circles in the Americas are celebrating an opportunity to take power back from a president, administration and people who have been a regional driving force for the advancement of Indigenous, environmental, women’s and workers’ rights. Bolivia has enjoyed one of the most stable economic growth rates in the Americas, between 4% and 5% in the last years, and decreased poverty among millions of Bolivians, from 59% to 39%, according to official data from the World Bank.[4]

A Call for Solidarity

On Thursday, October 24th, Bolivia’s election panel declared Morales the winner with 47.07% of the votes and Carlos Mesa the runner up with 36.5% of the votes.[5] According to a Center for Economic and Policy Research, Morales had a sufficient margin of victory to be declared the victor in the elections.[6] The Organization of American States presented findings that the election had irregularities and that the “auditing team could not validate the electoral results and were thus, recommending another election.”[7] The opposition contested the election, led by extreme right wing leader of the Santa Cruz Committee, Luis Fernando Camacho. Camacho is involved in the continental corruption case known as “The Panama Papers”[8]. He also has links with terrorist and separatist Branko Marinkovic, who enjoys safe harbor in Brazil, which is governed by the right-wing presidency of Jair Bolsonaro in Brazil [9]. In response to charges that the election was not valid, Morales invited the United Nations and the Organization of American States (OAS) to conduct an audit.[10] The opposition rejected these calls, reiterating their demands for Morales to step down.[11] Morales responded to the OAS audit, which claimed there were irregularities, by calling for new elections and a reconstitution of the electoral commission but the coup leaders rejected all of these concessions.[12]

Since the anarchy began, all of president Morales’ public statements have pleaded for peace and dialogue. However, the opposition has no interest in the social peace the MAS built. Quite the opposite, they want to reverse all of these gains.

In the town of Vinto, protestors brutally attacked, cut off the hair and marched MAS mayor Patricia Arce through the streets to humiliate her. Anti-government forces have picked up arms and burned down the homes of MAS activists and family members. In response, Morales said: “Burn my house. Not those of my family. Seek vengeance with me and Alvaro. Not with our families.”[13]

The U.S. headlines do little to explain the racial and class divide that defines Bolivia historically and at the current moment. Pro-democracy forces should seek to understand the inner-dynamics at work in Bolivian society and support the restoration of democratically-elected government and peace. Veterans of centuries of resistance, the Bolivian people are poised to keep resisting the coup and preserve the historic gains of the “process of change”.

Morales and the Movement for Socialism’s (MAS) true crime ⎯ in the eyes of the salivating gas multinationals and their local lackeys ⎯ was the severing of Bolivia’s historically exploitative relationship with the U.S.

In 2005, Evo Morales became the 80th president of Bolivia and its first Indigenous. In 2006, the MAS re-nationalized Bolivia’s vast gas reserves. Morales expelled the DEA, USAID, the Peace Corps and the U.S. ambassador because of their agendas of political intervention in domestic affairs, which is illegal in any country, as it is surely in the US. Aware of the 200 plus U.S. military invasions in the continent in the 20th century, the MAS established an anti-imperialist military school to train their own officers and rank and file soldiers. Cholitas, as Aymara women are known, have made important gains since 2005. Traditionally alienated from the formal economy and exploited as servants in the homes of the wealthy, Bolivia’s women have carved out new economic and cultural terrain to exercise more self-determination over their lives.

Despite all of the social and economic gains, the process of change was unable to completely transform the old state apparatus over the past thirteen years. In the decisive moment, when the rule of law came under attack, important sectors of the military high command and the police supported the coup.

In Evo’s own words upon resigning, in order to prevent more attacks against innocent Bolivians, “my sin is I’m indigenous and I’m a leftist.”

Contrary to what the second-place candidate Carlos Mesa, Luis Fernando Camacho and other pro-coup forces would have us believe, the violence and chaos is not just about Morales’ fourth presidential term; it is about what class forces control the future of Bolivia.

The overthrow of the MAS government and the victory of pro-U.S. interventionist forces, for the present moment, represent a monumental setback for the Bolivian people as well as for the cause of regional independence and democracy, akin to the rise of Pinochet in Chile in 1973.

While 66.2% of Bolivians are of Indigenous or mestizo (mixed Native and European with the indigenous component higher than the European) ancestry, the violence is concentrated in Santa Cruz and other areas where the largely lighter-skinned, Spanish-descendent, wealthier sectors have no interest in Bolivian unity and democracy.[14] The concentration of wealth in these sectors is the result of unequal development, a direct product of centuries of colonialism.

Santa Cruz tried to secede from Bolivia in 2008. The secessionist forces trampled on the red, yellow and green flag of the Plurinational State of Bolivia, the Wiphala, electing instead to fly the green and white regional flag. The call for “autonomy” and the latest burning of homes and violent attacks seek to steal back the direction of the Bolivian state. Driven by racism and a thirst for the unconstrained power they have been accustomed to since the inception of Bolivia’s history, these class forces believe they have won this round, forcing Morales and García from power.

It is important to place the temporary setback in Bolivia in the wider context of what is unfolding across Latin America.

Bolivia’s neighbor to the south, Argentina, just rejected the right-wing agenda of Macrismo at the polls. To the west, Chile is in revolt against a billionaire agenda and president, Sebastián Piñera. Further north, Colombia rejected Uribismo in local elections. Lula –the most popular politician in Brazil — is free after 19 months as a political prisoner. Millions of Haitians are in the streets demanding an end to U.S.-led exploitation and occupation. In Ecuador, there is a popular movement against Lenín Moreno’s hard turn towards the neoliberal economic model. And in Mexico, President Andrés Manuel López Obrador leads a new party which aims at building a post-neoliberal order for the country. Venezuela and Cuba continue to fight back against an all-out U.S. diplomatic, military, media and economic offensive.

The Coup Cannot Bury the Process of Change

As this article goes to press, there are numerous official denunciations of the coup from governments which defend the constitutional order in Bolivia as well as expressions of solidarity from progressive forces around the world. This is indeed a great blow to democracy and social justice in the Americas.

The OAS, after having failed to denounce the violence and racist attacks perpetrated by coup forces, has belatedly voiced support for the preservation of the constitutional order, for a new electoral authority, and for new elections, all of which were sought by President Morales himself.

“The General Secretariat requests an urgent meeting of the Plurinational Legislative Assembly of Bolivia to ensure the institutional functioning and to name new electoral authorities to guarantee a new electoral process. It is also important that justice continues to investigate existing responsibilities regarding the commission of crimes related to the electoral process held on October 20, until they are resolved.”[15]

Now that President Morales and Vice President Álvaro García have resigned and the coup has polarized Bolivian society, it will be difficult to re-establish the “institutional functioning” undermined by the coup. Morales has been granted asylum by Mexican authorities. Celebrants of the anti-Indigenous victory are burning the Whiphala in public squares. Popular mobilizations against the coup and in support of Morales which are now on the rise, are being met in some areas with brutal repression by the police.[16] There are reliable video and testimonial reports that mutinous police, who stayed in their barracks during the violence and destruction wrought by the anti-government forces, are now using live ammunition on people in El Alto.[17] Meanwhile the MAS and other organizations that have been major protagonists of the process of change are seeking to protect their ranks from persecution and regroup in order to defend the progress of the past decade, gains which have lifted millions of Bolivians out of poverty, revalorized Indigenous culture, and contributed to continent wide aspiration of realizing the Patria Grande. As Evo Morales has promised, “the struggle continues.”[18]

[1] Londono, Ernesto. “Bolivian Leader Evo Morales Steps Down.” New York Times. Nov. 10, 2019. https://www.nytimes.com/2019/11/10/world/americas/evo-morales-bolivia.html. See Article 161 (3) of the Constitution of Bolivia: The Chambers shall meet in Pluri-National Legislative Assembly to exercise the following functions, as well as those set forth in the Constitution: 3. To accept or reject the resignation of the President of the State and of the Vice President of the State.

[2] Nov. 10, 2019, statement of Vladimir Yuri Calderón Mariscal, Commander in Chief of the Bolivian Police, who subsequently resigned his post. https://twitter.com/Pol_Boliviana/status/1193621777081159682?s=20. Also see statement of Commander of the Armed forces of Bolivia, Williams Kaliman, who called for Morales resignation on Nov. 10, 2019. https://www.msn.com/es-xl/noticias/mundo/ej%C3%A9rcito-de-bolivia-pide-a-morales-que-renuncie-para-garantizar-estabilidad/ar-BBWyxVr?li=AAggXBX .

[3] International Work Group for Indigenous Affairs (IWGIA). According to the 2012 National Census, 41% of the Bolivian population over the age of 15 are of indigenous origin, although the National Institute of Statistics’ (INE) 2017 projections indicate that this percentage is likely to have increased to 48%. https://www.iwgia.org/en/bolivia

[4] The World Bank In Bolivia. https://www.worldbank.org/en/country/bolivia/overview

[6] Nov. 2019. Center for Economic and Policy Research. What Happened in Bolivia’s 2019 Vote Count? The Role of the OAS Electoral Observation Mission. http://cepr.net/images/stories/reports/bolivia-elections-2019-11.pdf?v=2

[7] Oct. 20, 2019. Preliminary Findings of the Organization of Amercain States. Analysis of the Electoral Integrity of the Plurinational State of Bolivia. http://www.oas.org/documents/spa/press/Informe-Auditoria-Bolivia-2019.pdf

[13] Nov. 10, 2109. “Statement of the Bolivian President, Evo Morales, upon Resigning from the Presidency.” https://www.youtube.com/watch?v=mUPkAv5E5ks

[16] There are reports that the police have asked for the military to intervene. See http://www.la-razon.com/nacional/Policia-Paz-intervencion-FFAA-violencia_0_3255874431.html

[17] In a tweet on Nov. 11, Evo Morales said: “After the first day of the civic-political-police coup, the mutinous police repress with bullets to provoke deaths and wounded in El Alto. My solidarity with these innocent victims, among them a girl, and the heroic people of El Alto, defenders of democracy.” https://twitter.com/evoespueblo/status/1193943984424603650?s=20

[18] Nov. 10, 2109. “Statement of the Bolivian President, Evo Morales, upon Resigning from the Presidency.” https://www.youtube.com/watch?v=mUPkAv5E5ks