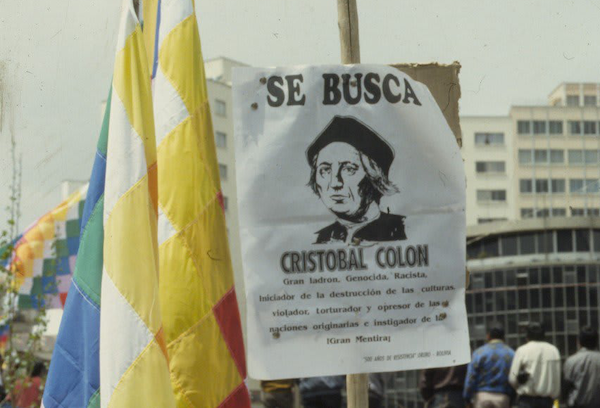 Mainstream media has been obediently disposing talking points from the nat-sec state. Despite the fact that President Evo Morales won by a 10 point margin, they keep peddling the myth that he “barely scrapped by” and that there was election irregularities. CNN has had completely partisan right-wingers posing as “Bolivian activists” on such as Jhanisse Vaca Daza.

Evo Morales, the first indigenous president in a country that is majority indigenous, has overseen an economic transformation since his first term, and he’s very popular to this day. He was initially barred from running for another term by term limits. He sought a referendum to abolish term limits, but it was narrowly defeated. Yet the Supreme Court(which is elected by the people) ruled that term limits were unconstitutional, so he was permitted to run again.

(If you think this invalidates the election or means that Morales is “authoritarian,” please explain to me why court decisions in Bolivia should be interpreted in a different way than any other country.)

Earlier this year, 12 Bolivian lawmakers from the right-winged opposition wrote a letter to President Trump asking him to intervene.

The election happened on October 20. To win in this first round, a candidate needs to get at least 50% of the vote, or 40% and win by 10 percentage points over the next highest candidate.

To understand what all the controversy is about you need to know that there are two counts in the Bolivian system. The TREP (quick count) and the official count. The quick count is so that on election night, some results are released.

The Organization of American States (OAS), which observes elections and provides technical guidance, has been recommending these types of systems and implementing them in a variety of countries, including Bolivia.

(This list has more places where it’s been implemented)

A quick count is supposed to provide confidence that election is progressing normally and give the media something to report on. To me, two sets of results seem like it would be confusing. And this time, it was!

As the results were coming in, Carlos Mesa, Morales’ main opponent was already saying how he had progressed to the second round. He was saying this based on the quick count, and based on incomplete results from the quick count. Here he is:

When the quick count reached 83.85% of vote sheets counted, the electoral authority held a press conference reporting the result. The results at this point were Morales 45.71% and Mesa receiving 37.84%, a difference of 7.87 percentage points.

This would indicate a second round, but remember this is only 83.85% of the results and is *not* the official count. At this point — and this is where the controversy started — the electoral authorities stopped the quick count.

They gave several reasons which all seem to be true:

Meanwhile, The OAS, Mesa, and other immediately condemned the electoral authority and put pressure on them to restart the quick count. It is unclear why. In nationwide races, the quick never has gotten to 100%. It’s hard to count rural votes in that timeframe.

As you can see the quick count gets to a certain level (which has been increasing over time for nationwide votes it seems) and the electoral authority has a press conference and suspends it. That’s exactly what they did this time.

Eventually, the electoral authority was under so much pressure, especially because the media conflated the official and quick counts, that they restarted the quick count. There were going to release a final quick count result but got pressure again to report results continuously.

So at 95.63% of vote sheets counted, they reported Morales having a lead of 46.86% to Mesa’s 36.72%. This is slightly over 10 percentage points, so all hell broke loose, and they were immediately accused of fraud.

I should point out here that we are still not talking about the official count, which is the only legal vote count. Anyway, the OAS released a statement where they said that the jump for Morales between these two data points was impossible.

It was an “inexplicable change in trend that drastically modifies the fate of the election,” which was repeated in a later report.

But as our paper shows, it’s not only possible, it’s probable. There’s little change in trend between before the quick count was suspended. 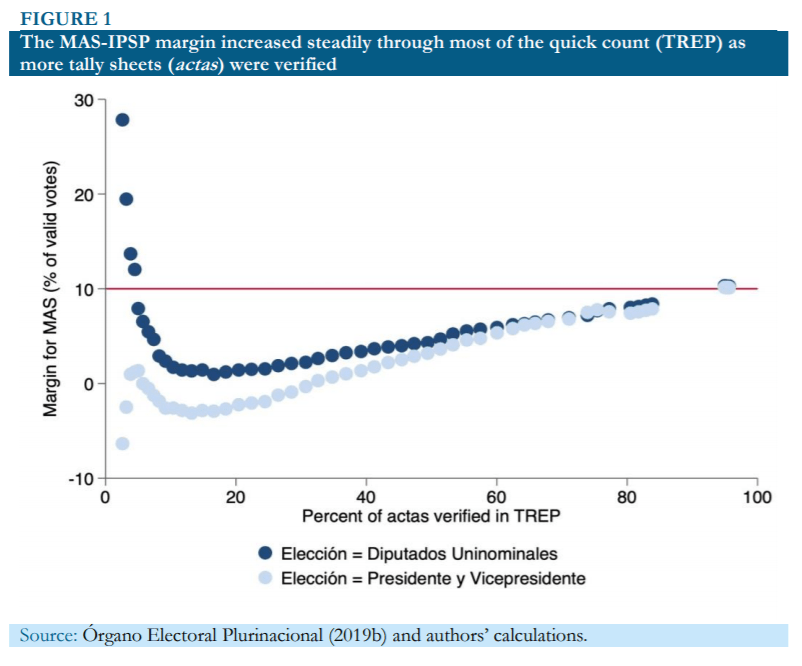 and after it was restarted. 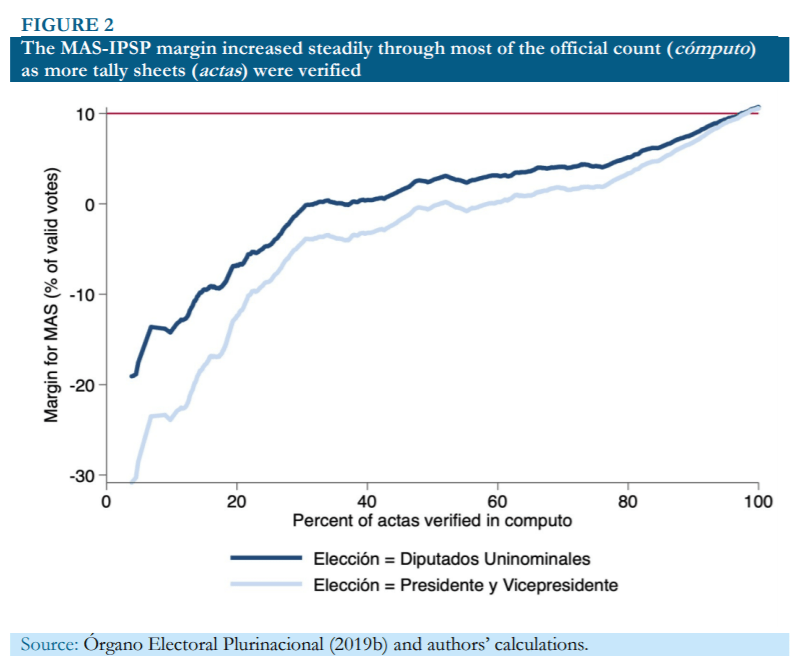 This is because Morales’ support is largely rural, and thus reports results later. This quick count trend matches very well with the eventually official count result, as well as the results from the legislative elections. 500 scenarios show Morales’ margin: 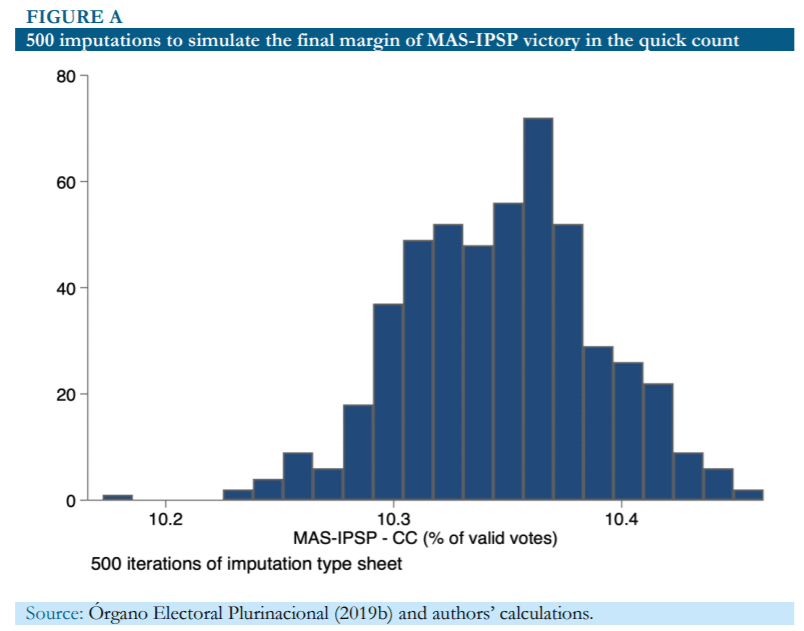 Eventually, the official count was released: Morales won in the first round 47.08% to 36.51%. If you had been watching the polls before the election, 5 out of 6 of them predicted the same result. Weird to have a fraud that matches up with polls.

Unfortunately, the damage was done especially because the media misunderstood the difference between the two counts, and the opposition started terrorizing Morales supporters in the streets. Morales agreed to abide by an OAS audit of the results, but curiously Mesa did not. Incidentally, in a report put out by CANVAS, an NGO that has been pushing regime change in Venezuela wrote the following: 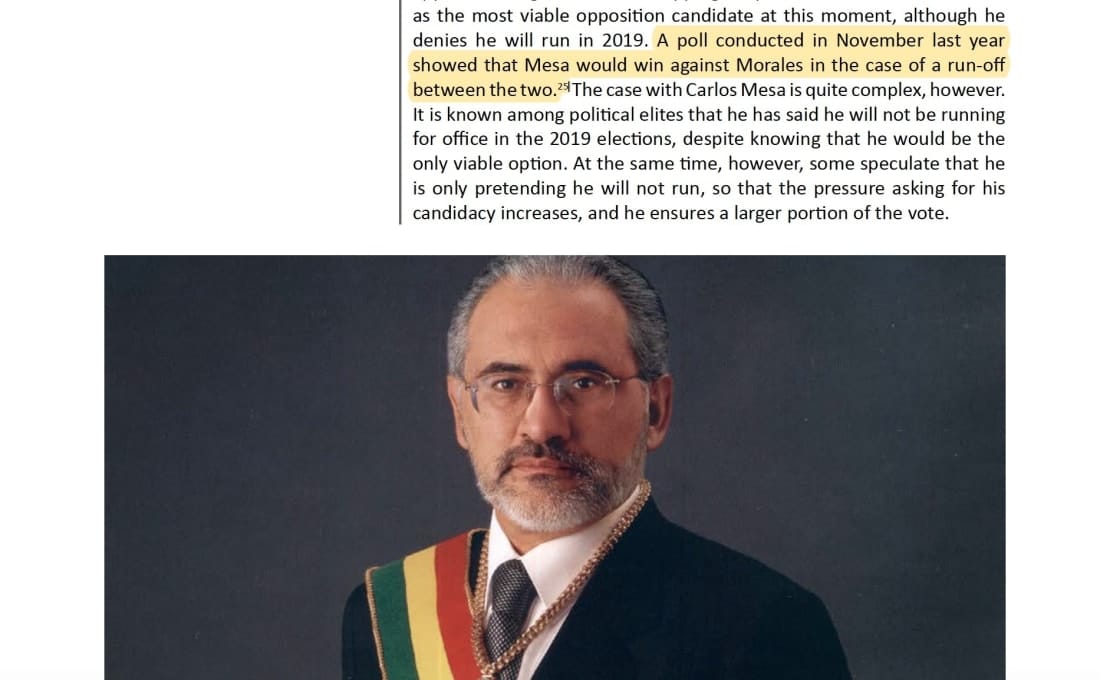 The OAS is not always the neutral, independent body it should be. It overturned an election it didn’t like in Haiti and scrutinizes left-leaning countries while turning a blind eye to right-wing regimes.

In its preliminary audit, the OAS doubles down on the idea that the quick count was manipulated, *even though the official count is the only binding count and it is counted in a separate process.* Most of the report is about the quick count.

The OAS fits trend lines to cherry-picked data to produce graphs like these, and take issue with a lot of ways the quick count was conducted. It’s a bit suspicious to say the least:

except uh, wait, before the system went down, there was a clear trend upwards in Morales’ vote share as votes were tabulated. pic.twitter.com/n1AKM3OFj7

A lot of it also relies on arguments from IT contractors to the electoral authority. These contractors talk a lot about vulnerabilities in the quick count system but don’t prove they were exploited in any nefarious way (and again, this is *not* the official count). 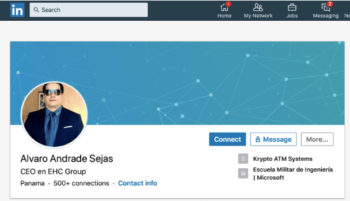 In a related-note, we learned that Alvaro Andrade Sejas, is the owner of Ethical Hacking which was hired by Bolivia’s Tribunal Supremo Electoral (TSE) to monitor the technical side of #Bolivia‘s recent election. He was also part of President of Police Attachés of Latin America in the United States of America (APALA), which is based in Washington, DC.

APALA is a “multidimensional security” program that works to build relations and connections between U.S. authorities and police officials from many of the Organization of American States members. Alvaro Andrade Sejas is also contact person for APALA.

Moving to the official count, they say chain-of-custody was broken for the voting sheets (in part because opposition protesters burned electoral buildings), and that there appear to be some irregularities in some of the sheets.

From what I can see, it’s unclear what, if any, fraud has been proven. Irregularities should be investigated of course, but every election has them, and it doesn’t seem like they were large in this case. It’s a baffling report.

There are also safeguards in the Bolivian system. Observers watch the tallying of votes in public. These include observers from Mesa’s party.

This wasn’t a serious, independent audit at all. And it further emboldened the opposition which threatened the lives of those in Morales’ party. There are reports of family members being kidnapped to force resignations. Morales’ house was ransacked.

The squalid U.S.-backed fanatics of the Bolivian right ransack the house of the country’s elected president, Evo Morales. And the havoc is just beginning. Let no one call them “pro-democracy.” pic.twitter.com/rwwvOSAEaA

Morales had to abide by the OAS audit and endorsed a new election. But it was too late: a military coup forced him from office. But the OAS, the media, the opposition, and the United States, who backed the OAS at every point, are complicit in all of this. It’s a travesty.

Here’s another good source: the National Democratic Institute, hardly a left-leaning place has a manual on how to observe quick counts. Much of what the OAS has done in its observation and audit is warned against in here:

Morales had to abide by the OAS audit and endorsed a new election. But it was too late: a military coup forced him from office. But the OAS, the media, the opposition, and the United States, who backed the OAS at every point, are complicit in all of this. It’s a travesty. Especially, since the interim “president” repeatedly called the Andeans “Satanic Indians” who should be deported. In this tweet, she says, “I dream of a Bolivia free of satanic indian rituals and that they go to the Altiplano or Chaco. The city is not for Indians”

Kevin Cashman does research at the Center for Economic and Policy Research, which is sometimes posted on the CEPR website. This has focused on making visualizations and tools to illustrate labor market data, argue for more equitable policies, or debunk myths (e.g. that minimum wages correlate with higher unemployment, that certain industries face labor shortages, or that robots are taking our jobs). He is also a contributor for Economic Questions, have guest posts on Naked Capitalism, and write in a few other places, mostly about technology.