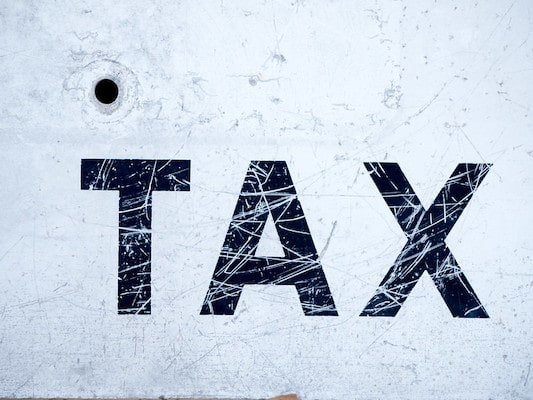 TAX “There are only two things worse then an empty canvas: death and taxes.” ― Ragnar Tornquist

The bank robber Willie Sutton, when asked by a reporter why he robbed banks, is reputed to have answered, “Because that’s where the money is.” Which brings us to a wealth tax.

Transforming our economy is going to be expensive. And a tax on the wealth of the super wealthy is one way to capture a sizeable amount of money, which is why both Bernie Sanders and Elizabeth Warren include the tax in their respective programs. The economists Gabriel Zucman and Emmanuel Saez estimate that Sanders’s proposed wealth tax would raise $4.35 trillion over the next decade, while Warren’s would raise $2.75 trillion.

Where the money is

The concentration of wealth has steadily increased since the mid-1990s, as illustrated in the following Bloomberg News chart. 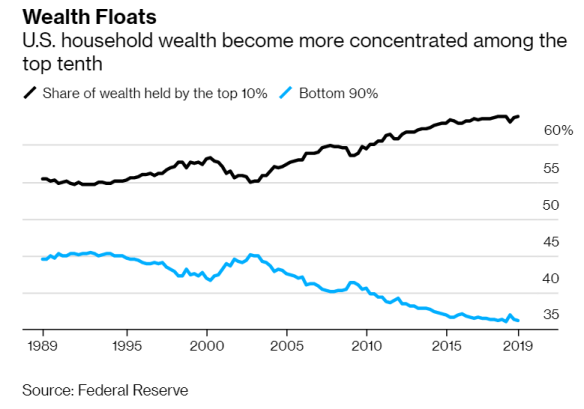 A recent Federal Reserve Bank study highlights the fact that the top 10 percent and even more so the top 1 percent of households have been especially successful in increasing their equity ownership in U.S. public and private companies. For example,

It is worth emphasizing that last point: the top 1 percent of households now control more than half of the equity in U.S. businesses, public and private.

The figure below shows total wealth holdings for all U.S. families as of the second quarter, 2019. The top 1 percent now own almost as much wealth as all the families in the 50th to 90th percentiles combined. 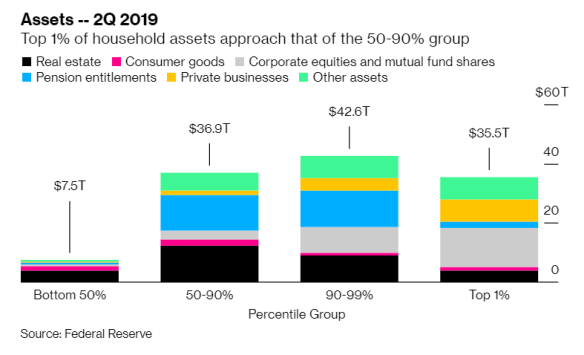 A comparison with the size and distribution of wealth in 2006, shown below, illustrates the rapid gains made by those at the top. 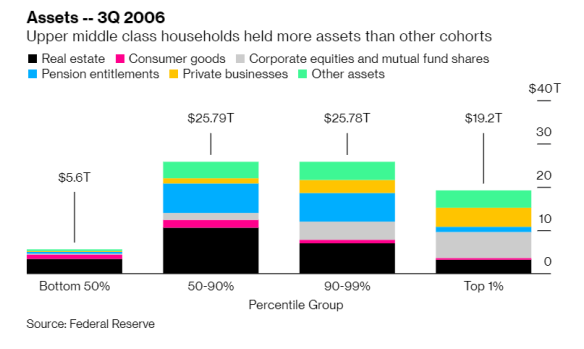 Time for a wealth tax

Recognizing this reality, and the fact that this concentration of wealth was aided by a steady decline in top individual, corporate, and estate tax rates, both Sanders and Warren want to tax the super wealthy to generate funds to help pay for their key programs, especially Medicare for All.  And, as an added bonus, to begin weakening the enormous political power of those top families.

Zucman and Saez have calculated how some of the richest Americans would have fared if these wealth taxes had been in place starting in 1982. For example, Jeff Bezos, the founder of Amazon, is currently worth some $160 billion. Under the Sanders plan his wealth would have been reduced to $43 billion. Under the Warren plan, it would be $87 billion.

As a New York Times article sums up:

Over all, the economists found, the cumulative wealth of the top 15 richest Americans in 2018—amounting to $943 billion, using estimates from Forbes—would have been $434 billion under the Warren plan and $196 billion under the Sanders plan.

Despite the fact that the super wealthy will still have unbelievable fortunes even if forced to pay a wealth tax, almost all of them are strongly opposed to the tax and determined to discredit it.

Americans are . . . positively enthusiastic about Sen. Elizabeth Warren’s proposal to institute a wealth tax on large fortunes, according to a new poll from Morning Consult. Their survey finds that . . . the wealth tax scores a crushing 60-21 victory that includes majority support from Republicans.

Of course, this kind of support was registered before the start of any serious media effort to raise doubts about its effectiveness. Recently, a number of wealthy business people and conservative economists have begun to make the case that a wealth tax is a radical measure that will harm the economy. Some point to the fact that many countries that once used the tax have now abandoned it. Twelve OECD countries had a wealth tax in 1990, now only three do (Norway, Switzerland, and Spain). France, Germany, and Sweden are among the majority that no longer use it.

However, as Zucman and Saez explain, this fact does not mean that a wealth tax would not work in the U.S. For example, in some countries it was the election of conservative governments philosophically opposed to such taxes that led to their elimination. More substantively, they highlight four problem areas that tended to undermine the effectiveness of and support for national wealth taxes in Europe and why these should not be a major problem for the U.S.

First, European countries have their own separate tax laws and member states do not tax their nationals living abroad. Thus, a wealthy person living in a country with a wealth tax could easily move to a nearby country without a wealth tax and escape paying it. And many have. But, as the economists note,

The situation in the United States is different. You can’t shirk your tax responsibilities by moving, because U.S. citizens are responsible to the Internal Revenue Service no matter where they live. The only way to escape the IRS is to renounce citizenship, an extreme move that in both Warren’s and Sanders’s plans would trigger a large exit tax of 40 percent on net worth.

Second, European governments tolerated a high level of tax evasion. Until last year, they did not require banks in Switzerland or other tax havens to share information about deposits with national tax authorities. This made it easy for the wealthy to hide their assets. The U.S. is in a better situation to avoid this outcome. The Foreign Account Tax Compliance Act, signed in 2010, requires foreign financial institutions to send detailed information to the Internal Revenue Service about the accounts of U.S. citizens each year, or face sanctions. Almost all foreign banks have agreed to cooperate.

Third, European wealth taxes had many exemptions and deductions. In contrast, there are none in the proposed plans by Warren and Sanders.  Zucman and Saez highlight the French program that was in place from 1988 to 2017 as a prime example:

Paintings? Exempt. Businesses owned by their managers? Exempt. Main homes? Wealthy French received a 30 percent deduction on those. Shares in small or medium-size enterprises got a 75 percent exemption. The list of tax breaks for the wealthy grew year after year.

Fourth, European wealth taxes fell on a considerably larger share of the population than would the proposed plans by Warren or Sanders. In Europe, “wealth taxes tended to start around $1 million, meaning they hit about 2 percent of the population, compared with about 0.1 percent for the proposed U.S. plans.” This broader reach of the European wealth taxes helped to generate popular pressure to weaken them, leading to their eventual removal. The more limited reach of the proposed U.S. plans should help to blunt that development in the U.S.

We can certainly expect a fierce debate over the viability and effectiveness of a wealth tax as the campaign season continues, especially if Sanders or Warren becomes the Democratic Party nominee for president. We should be prepared to advocate for the tax as one important way to ensure adequate funding of needed programs. But we should also take advantage of the debate to shine the brightest light possible on the growing and already obscene concentration of wealth in the U.S. and even more importantly on the underlying and destructive logic of the capitalist accumulation process that generates it.