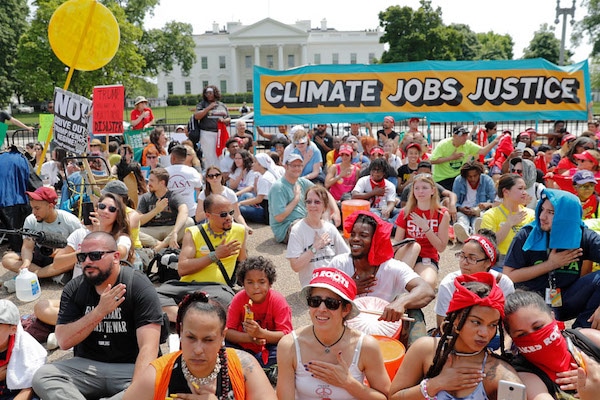 Humans may not survive. Reports from the UN’s Inter-Governmental Panel on Climate Change provoke images of land masses drowning, fleeing populations, starvation, terrible droughts, terrible storms, migrating diseases, new deserts, and intolerable heat. It’s an “ecological Armageddon,” says one expert. We hear about “the sixth extinction,” the geologic epoch that is our own. It’s called the “Anthropocene.” The name suggests human activity and human responsibility.

It’s bad enough to imagine blame and scenarios of dread, as if from science fiction, but add in the presently feeble response to dire threats and we’re in a funk. If tools were available, we’d get a lift. Marc Brodine’s book Green Strategy, reviewed here, is about tools.

It’s about capitalism too. For Brodine, that’s “the root cause of most of the environmental problems we face, and is also the biggest obstacle in finding real solutions.” Those problems stem from “wide-ranging imbalances between the ways that humanity impacts nature and the limits of the resources that nature is able to provide.” For Brodine, environmental abuse manifests as climate change and also vanishing fresh water, toxins and pollutants on land and in the sea, ocean acidification, deforestation, topsoil losses, decreasing soil fertility, disappearing species, and the spread of infectious diseases.

Brodine apparently regards scientist and environmental activist Barry Commoner as a mentor. In 1997, Commoner attributed the environmental crisis to “our systems of production—in industry, agriculture, energy, and transportation.” That year, he predicted “global human catastrophes: higher temperatures [and] the seas rising to flood many of the world’s cities.”

Ever-expanding production is the hallmark of capitalism, and the role of capitalism in causing environmental devastation is under the microscope. “[T]his new ecological stage was connected to the rise, earlier in the century, of monopoly capitalism,” Monthly Review editor John Bellamy Foster claimed in 1994. Judgment as to who is responsible for global warming turns to the association of production, fossil fuel, and emissions as the “smoking gun.”

Knowledge of cause might have brought about strategizing. That hasn’t happened. Naomi Klein in her 2016 book This Changes Everything blamed capitalism for disturbing the climate, but limited her remedial proposals to civil disobedience and lifestyle alterations.

Now the Green New Deal surfaces in response to the environmental challenge. Separate proposals sponsored by Rep. Alexandria Ocasio-Cortez and others, and by Sen. Bernie Sanders, contain what Foster calls “revolutionary reforms.” In his opinion and that of Naomi Klein, whose views have evolved, these reforms could lead to transformational changes. What’s needed, says Foster, is “a mass mobilization of the entire society.”

Neither Green New Deal proponents nor commentators have explained how that might happen. How to launch education, organization, and unified action is left for another day. The Labor Network for Sustainability, The Atlantic  magazine, the People’s Policy Project, and Resilience instead focus on feasibilities or on the availability of resources. The Nation magazine calls for mobilization, but offers little more.

Marc Brodine’s Green Strategy  fills the void. The book is about developing political will, specifically about creating a movement “capable of building the political power to implement fundamental change.” Brodine envisions a giant coalition in which political struggle for nature would merge with other struggles.

Or more precisely: “A massive movement is needed, worldwide in scope, to fight defensive battles against environmental degradation and exploitative development. Then the movement can proceed to fight for long-term fundamental transformation of our economies.” The object is “broad-based unity to reach and organize millions of people.”

Brodine calls for defenders of the environment to organize politically and make linkages in many directions to build “political force.” He envisions alliances with “struggles for peace, justice, equality, health care, immigrant rights.” People will be “gaining strength from each other” from a “network of mutuality,” an expression of Rev. Martin Luther King, Jr.

Coalition-building will be reciprocal: “All progressive struggles have an environmental component, and successful alliances have been built…uniting environmental concerns with economic ones.” Environmental struggles will join with peace and justice movements throughout the world.

In his survey of U.S. movements for civil rights and labor rights, for ending apartheid and the Vietnam War, Brodine finds precedents for achieving unity and avoiding hazards. He discusses problems posed by far-left politicking, mixing moral imperatives and practicalities, and confusing tactics with strategy. He would pursue reforms and revolutionary goals simultaneously and work with “cross-class elements.”

The labor movement is a crucial player, both because of labor’s organizational expertise and because the enemies of labor are the enemies of other progressive causes. And, “Only workers have the power to shut down the economy [and to] wrest control of production decisions away from the capitalist class.”

Indeed, “Working class power is the only force capable of saving humanity from capitalism and creating a sustainable economy and sustainable environment.” The author identifies the working class as the “vast majority of humanity that works for a living.” He calls for collective solutions for environmental problems, social control of resources, and “fundamental changes to our economic system.” In essence, “socialism is a necessary precondition for the survival of the human race, for the kind of fundamental solutions humanity needs.” The socialism Brodine wants is “based on a scientific understanding” of human-caused risk to nature.

Socialist assumptions in Green Strategies are frequent but unobtrusive. The chapter on “environmental socialism” is a high point. While perhaps not the author’s prime goal, the book provides the reader with useful information on the workings and aspirations of the socialist movement, which includes the author’s own Communist Party USA. Socialists reading the book might be reminded as to who they are. For the others, says Brodine, fighting for the environment may be “a new path to socialist consciousness, a new way to understand the need for fundamental economic change.”

Marxist theory explains how change occurs. Brodine cites interconnections, “feedback” loops, and contradictions affecting natural and social phenomena. They lead to tensions and thus to change, which is constant. Small quantitative changes accumulate and then manifest as one big change, a qualitative one. That’s the so-called “tipping point.”

Looking at societal problems, he describes new realities and struggles impinging upon the political status quo. In theory, new political solutions follow, one after the other. Those political processes dealing with environmental challenges are under stress. They misfire and go on a new tack. Eventually they solidify into a collective human effort aimed at rescue. That’s another tipping point. 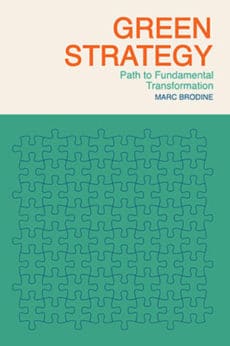 Brodine is well-equipped to author a book outlining society’s response to environmental disaster. He has long headed the Communist Party’s environmental work and the book demonstrates his familiarity with research findings and dialogue in the natural sciences. Socialism, he writes, “harnesses the latest in science, technology, and social organization.”

Virginia Brodine, the author’s mother, must have had a lot to do with why this book exists. A colleague of Barry Commoner, she was a prominent anti-nuclear and environmental activist and an author (Air Pollution and Radioactive Contamination, 1972). Her writings are collected in the book Red Roots, Green Shoots (International Publishers, 2007).

Brodine’s writing style is clear and cogent. The book is well organized. Readers may object to repetition of insights and conclusions. But for this reviewer, reiteration was useful in reinforcing the author’s main points. Any future edition of the book—potentially a prize as the crisis advances—would benefit by the addition of an index.

From this vantage point, Green Strategy is a valuable and much appreciated book. It’s a primer on forming a mass movement serving the people. Grounded on science and on political and social realities, it’s well suited to have an impact on what counts, which is conscious-raising in favor of collective solutions. Above all, the book is about the survival of living things and the integrity of nature and so has ethical thrust.