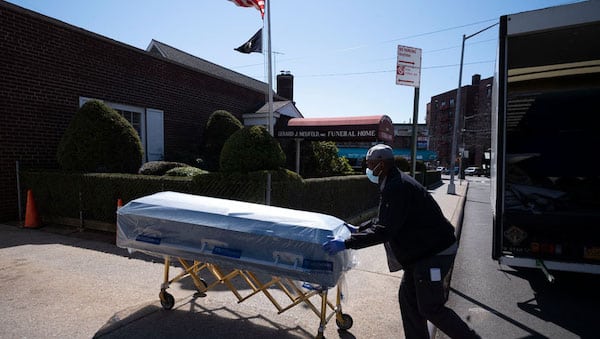 In this March 27, 2020, file photo, William Samuels delivers caskets to the Gerard Neufeld Funeral Home during the coronavirus pandemic in the Queens borough of New York. New data finds that life expectancy in the United States has dropped significantly over the past few years. It is clear that racial minorities suffered the biggest impact, but census information ignores the role of socioeconomic class. | Mark Lennihan / AP

Reporter Jim Naureckas imagines the lament of Times writers that, “China has had the enormous misfortune of avoiding mass death.” He is sarcastically contrasting lives saved in China with lives unnecessarily lost in the United States, where COVID-19 deaths now exceed one million. He indicates that China now exceeds the United States in life expectancy.

U.S. reporting on the downhill turn of U.S. life expectancy is fertile ground for the emergence of press bias in accounting for the excess deaths in ways that satisfy establishment leanings.

The U.S. government recently released statistics indicating that U.S. life expectancy at birth is now 76.1 years. That’s a return to the life expectancy level in 1996. The 2021 figures, down from 77.0 years in 2020 and from 78.8 in 2019, represent the greatest multi-year life expectancy decline in 100 years. Life expectancy for men in 2021 was 73.2 years. That level signifies an unprecedented male-female gap of almost six years.

U.S. press coverage of bad news on life expectancy barely mentions international comparisons and neglects the political and economic context of the drop in life expectancy. The reporting attributes the decline mostly to excess deaths from COVID-19 infection.

In explaining deaths during the pandemic, the New York Times and Washington Post focus on the disaster befalling Indigenous peoples in the United States. The combined male-female life expectancy of Indigenous peoples as of 2021 registers at 65.2 years. Indigenous death rates have recently exceeded those of white people by a factor of 10.

These articles, and others throughout the period of the pandemic, have pointed to the particular risk COVID-19 infection poses for non-white populations. Press reports have cited Black and Hispanic mortality rates that are from two to four times higher than rates for white people. Reports have leaned on public health data showing that “communities of color” had suffered from much chronic illness beforehand that compounded difficulties in recovering from COVID-19 infection.

Reporting has mentioned poorly accessible or low-quality medical care for these chronic diseases. The implication, usually not explicit, is that racism is the factor that largely accounts for the increased COVID-19 death rates among ethnic minorities. If so, the job of getting rid of racial oppression would be the best way to reduce human loss from the pandemic and restore decent life-expectancy figures.

Otherwise, inquiry into the nature of U.S. healthcare is missing. Unsurprisingly, there are no calls for universal access to healthcare, improved preventive care, additional first-contact providers of care, removal of financial barriers, and higher quality of care. Lacking too is discussion of steps taken on behalf of education, housing, adequate nutrition, and safe retirement: All of these, taken together, promote good health.

Not much appears about the disjointed, inaccessible, unavailable care that many Americans experience, white people included, and chronic diseases that all must endure. The overall emphasis in the reporting is the special vulnerably of non-white people and the influence of racism that accounts for lowered life expectancy.

There is silence on social class. Seemingly alone among the major U.S. media, Newsweek highlighted the contrast between reduced U.S. life expectancy and Chinese and Cuban gains. The 2021 life expectancy of both countries, 78.2 years and 79 years, respectively, was higher that year than that of the United States.

China and Cuba are socialist countries that redistributed wealth and opted for working-class political power. U.S. media and elected officials are not prone to acknowledging successes of the socialist countries, where, by definition, their policies are oriented toward the working class.

Writing in 1991, Vicente Navarro, public policy and public health expert, notes that “class is rarely discussed in the scientific and mainstream media in the United States.” He adds that,

even if blacks and whites died at the same rates, most blacks would still have higher mortality rates.

The United States is one of the very few countries that do not include class in its national health and vital statistics. It collects health and vital statistics by race and gender but not by class, even though, as I have shown, class mortality differentials are far larger than race or gender differentials. Class discrimination is the most frequent and least spoken of type of discrimination in the United States.

Navarro’s remarks provide perspective to the biases described here in press coverage. Press silence on developments shaped by class considerations presumably suits establishment opinion-shapers for whom red-scare is a time-tested tool. Anti-Cuban sentiment and China bashing may play a role, but those postures too may stem from red-scare. Navarro has the last word:

The capitalist class is extremely powerful.

The heroic veteran journalist John Pilger once explained that, “Journalists can help people by telling the truth, or by as much truth as they can find, and acting not as agents of governments, of power, but of people.” He asked recently,

Do we live in a Media Society where brainwashing is insidious and relentless, and perception is filtered according to the needs and lies of state and corporate power?