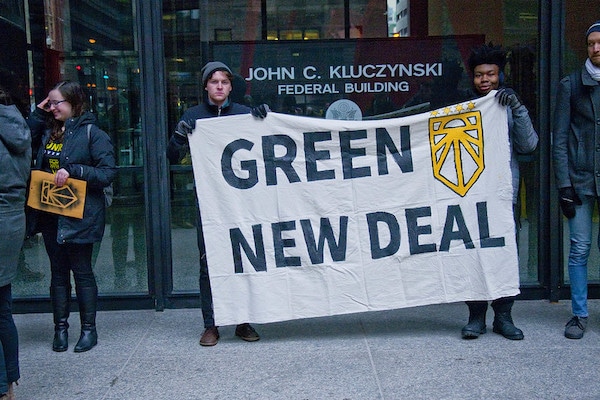 The Green New Deal is an exciting social program generating a great deal of interest on the left. Like its predecessor, the New Deal of President Franklin Delano Roosevelt, the GND holds out the promise of preventing the worst effects of anthropogenic climate change, and guaranteeing a better standard of living for its participants. Presumably, it would be large enough to put upward pressure on wages in the private sector or be a guarantee of employment and includes increased federal spending on renewable energy, social democratic guarantees of a living wage, and other forms of environmental cleanup.

For the Marxist left, the GND is an object of considerable interest, both politically and academically. Many of the popular left-leaning and socialist publications in the U.S., including Jacobin and Current Affairs, have published extensive analyses of the GND for a wider audience. As more Americans realize the need for a decisive break with capitalism, the GND offers an opportunity for the U.S. public to challenge political and economic orthodoxy, to say nothing of the potential to avert climate catastrophe and raise the living standards of the working class. It also offers a positive social imaginary to counter the prevailing “doom and gloom” of catastrophic climate change predictions. The GND also promises to close racial, ethnic, and gender inequalities. Indigenous activists have also drafted their own plan, the Red Deal, to address the environmental and economic struggles of indigenous peoples in the United States. A recent addition to the GND through the Sanders’ presidential campaign and Rep. Ocasio-Cortez’s office includes decarbonized, affordable housing.

To the credit of the GND’s supporters and their efforts to promote it, a wide swathe of the U.S. population is interested in the program, according to recent polling. A broad segment of the working class, including many self-declared Republicans, finds the idea of environmental sustainability and a decent living standard enticing. The GND holds out hope of challenging neoliberal doctrines and bringing a large portion of the economy under democratic control. Eliminating the “reserve army of labor” through a jobs guarantee would massively increase labor’s bargaining power. Similarly, such a bill could lead to a “just transition”, nationalizing fossil fuels en route to complete decarbonization of energy.

Despite this good news, there are some reasons for hesitation. There are some issues surrounding the Green New Deal that the left needs to broadly consider coming out of the eco-Marxist left, especially the scholarship and writing of John Bellamy Foster and the “treadmill of production” theorists, including Allan Schnaiberg, David Pellow, and Kenneth Gould. Second, we must consider the likelihood of the state becoming the main engine of this movement, rather than private capital, replacing our prevailing system of production with a “state-sponsored” green capitalism.

I consider the GND’s limits in the most optimistic and open spirit, and I hope that this piece will help to write a more effective program. The political opportunities opened by such a plan are something to celebrate, but if the GND ultimately worsens the climate crisis, the Deal will hardly have been worth the political capital spent in passing it into law. For this reason, I hope leftists of all orientations will take a moment to consider these critiques.

The dangers of expanded production and consumption

One of the most prominent theories in environmental sociology is the “treadmill of production” theory pioneered by Allan Schnaiberg in his 1980 The Environment. From Surplus to Scarcity, and expanded upon with his frequent collaborators Kenneth Gould and David Pellow. This theory holds that demands by both capital and labor to expand economic production create new and greater forms of waste. Similarly, this pressure promotes more efficient use of resources. However, this efficiency incentivizes further net consumption. This “Jevon’s Paradox” was first demonstrated in 1865 by William Stanley Jevons in Britain’s improvements in steam engines resulting in faster consumption of the country’s coal supplies. A similar phenomenon prevails with small cars in the U.S. today. Take, for instance, the gain in “miles per gallon” efficiencies in personal automobiles. Although the fuel efficiencies of most vehicles have risen dramatically since the 1970s, the addition of millions more automobiles and the increased distances Americans commute mean that Americans are consuming more gasoline than ever before.

The treadmill of production idea becomes relevant in the context of the GND because of the gains in energy production efficiency, as well as the program’s proposed investments in the expansion of public transportation and “clean” manufacturing methods. The efficiency gains of a nation-wide energy efficiency program can be undone by a total increase in material inputs.

Examining renewables in greater detail, wind turbines and solar panels produce a host of environmental externalities. Both technologies rely on the availability of rare earth metals. Their manufacturing and disposal generate other forms of toxic pollutants. Also, converting land from either “natural” usage to land for renewables will also have a variety of environmental externalities, exemplified by solar farms in California’s deserts, which have displaced native species like the desert tortoise.

Another issue resulting from this practice will be a widening of the “metabolic rift” between global regions and between the natural metabolism of the earth and humanity’s production and consumption of natural resources. John Bellamy Foster’s work on the “metabolic rift” derives from Marx’s Economic and Philosophical Manuscripts of 1844 and Marx’s attendant interest in the widening gap between “town and country.. Marx studied the developments in agricultural science and soil chemistry during his era and noted the tendency of capitalism’s material demands to outstrip nature’s restorative capacities. As the natural fertility of soil declined, agricultural producers came to rely on distant sources of nitrogen-based fertilizers. This shift led to a “metabolic rift” in the spatial distribution of soil nutrients and a temporal rupture in the earth’s natural cycles of soil fertility.

The GND threatens to reproduce this gap. To use a single example, though the U.S. has some deposits, the rare earth metals used in solar panels and wind turbines will come from Global South states where mining and processing these minerals poses great risks to human health and the environment. The benefits of using these materials in renewable technologies will not be seen by the citizens of those countries where extraction occurs. The GND’s agricultural methods hold some promise of making major gains in de-carbonizing the U.S.’s agricultural system, but the movement of soil fertility around the U.S. as agricultural goods made in one region move to another still would widen the spatial and temporal elements of the metabolic rift.

At present, it does not appear that the GND is dealing with the contradictions of the treadmill of production and a widening metabolic rift. The “treadmill of production” poses yet another problem though. the contradiction of continually expanding production to meet the systemic demands of capital to accumulate and workers’ attendant dependence on this cycle for wages. Production of “green” things may need to expand continually to generate employment and welfare benefits for workers. Workers in a new state sector could find themselves dependent on this expansion, just as they would have under private capital. Although “green”, this expanded production will recreate the environmental problems the GND is meant to end. Getting off this treadmill is going to require more than just vigorous investment by the state in green infrastructure. Next, I turn to the GND’s potential to create a state-sponsored green capitalism.

The creation of a green fraction of capital

The GND is consciously modeled on the New Deal of the 1930s. The New Deal saw an expansion of social programs benefiting wide swathes of the working class. Social Security was lifted wholesale from socialist programs. Farm aid encouraged both recovery from environmental problems like the Dust Bowl and debt relief for poor farmers. Infrastructural development raised wages and boosted further growth. In terms of arts and culture, working people were mobilized into new forms of cultural production celebrating working-class identity. The general agitation during this period by the broad left pushed these programs forward despite the opposition of powerful factions of the capitalist class in the United States.

Despite this legacy, the New Deal preserved capitalism during one of its most dire crises to date; the GND may perform a similar regulatory function. One of the boosts the GND is likely to give to capital is through state investment through private partnerships. The GND does not propose the creation of state ownership of utilities, much less agriculture, housing, or medical care. Similarly, the bill has provisions for energy upgrades through refurbishing existing buildings, environmental cleanup, and an unusual provision to “ensure businesspersons are free from unfair competition.. Without further establishing state ownership over these sectors, many of these provisions are going to add value to existing private property or rely on contractors to do the work, paid for by large sums of public money. Although the GND provides decent employment and these emission reduction programs are desperately needed, much of this activity will generate further wealth in private hands if not performed by the state. The present electoral left may not be capable of enacting or want to deliver on this revolutionary goal.

The Green New Deal could end up following a similar course of initial interest, growth, and collapse. However, a “Green” New Deal has other social and environmental goals which need to be considered. As environmental degradation continues, compromise measures that do not lead to drastic cuts in greenhouse gases, mining and processing of non-renewable energy sources, and losses of biodiversity will not suffice. However, such activities might provide some degree of environmental stability that will enable capital to continue its dominance.

John McCollum is an assistant professor of sociology at Minot State University.