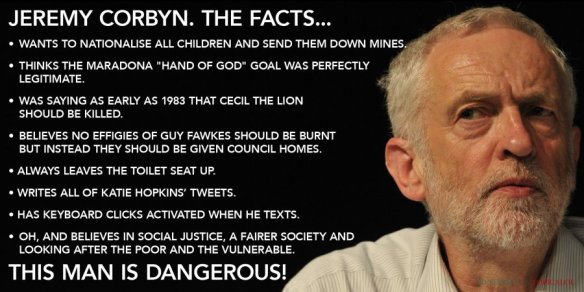 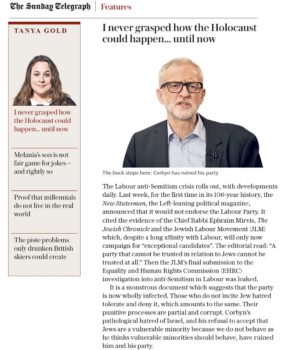 Labour’s massive loss to the Tories has bummed out a lot of people. Everyone’s discussing it and arguing about what went wrong and who’s to blame. I don’t have any special insight into UK politics, but one thing that really shocked me about the election is the way that Jewish identity and fabricated charges of antisemitism were weaponized in a smear campaign against Jeremy Corbyn and the mild leftwing shift of his Labour Party.

I noticed it a bit here and there but for a long time I didn’t pay too much attention. But as the election got closer, the antisemitism “scandal” got impossible to miss. The smears reminded me of the 2011 tsunami that devastated Japan and ripped apart Japan’s Fukushima nuclear power plant. I remember sitting at home and watching cellphone and aerial videos of it almost in real time. The tsunami started out as a few almost insignificant waves. But they kept coming and coming until they grew into a terrifying and unstoppable wall of black grime and wreckage that engulfed and destroyed everything in its path. That’s what this campaign felt like. Even the previous smears of Corbyn being a Russian asset got washed away.

And just like with that tsunami, the propaganda wave against Corbyn was so powerful that it hit here in America-even the people who don’t really follow UK politics couldn’t get away from it.

Every mainstream news outlet-from the NBC to the Washington Post to the Atlantic to the New York Times—ran op-eds, published think pieces, and churned out reporting on the issue, making it seem that Jeremy Corbyn was the world’s biggest antisemite.

The list of people and institutions that helped propagate the smears is long. But the Wiesenthal Center topped everyone, alleging that Corbyn the biggest threat to Jews around the world. Corbyn was the next Hitler! Why? Well… 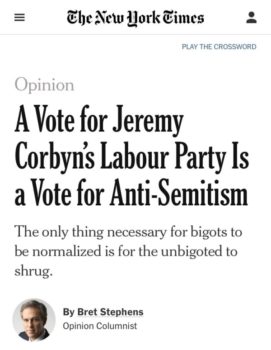 Those who tried to trace these wild allegations quickly found out that the supposed antisemitic takeover of Labour under Corbyn was a massive media fabrication. The actual real-life incidents boiled down to some trolls on Twitter and a few racist comments by real-life rando Labour members—a tiny set in a big national party. (If you want to get deep into the lack evidence and the media campaign surrounding it, read this free book by Verso.) And as far as Corbyn’s personal antisemitism? Well, that was really about his leftwing politics on the Palestine-Israel question, which had actually gotten a lot softer after he became leader of the party. It’s that old conflation of anti-semitism with anti-zionism that I’ve been writing about this week.

Even for someone like me with only a basic understand of UK politics it was obvious that Israel, antisemitism, or the legitimate fears of Jews were not what this campaign was about. What it was about was a domestic power struggle-a multi-front war between Labour and the Tories on the one hand and an intra-Labour fight between Corbyn and the old neoliberal flank of the party that he had displaced. The allegations of antisemitism were a weapon—cynically deployed to envelop Corbyn in a noxious cloud and sink his candidacy. So despite the power and the reactionary politics of the Israel lobby, none of these smears would get any traction if they didn’t fit in with the interests of the anti-Corbyn political establishment. In short: it’s all domestic politics.

And for me, a Jew, that’s what makes this campaign doubly gross. Whether in Israel, America or Britain, Jews joined in this fake campaign and created and legitimated a non-existent “Labour antisemitism” problem just because they disagreed with Corbyn’s mildly leftwing politics. They eagerly made their Jewish identity into a propaganda weapon and handed it over Corbyn’s domestic political enemies. As David Graeber pointed out, this is more than just cynical. In the long run, it’s extremely dangerous and bad for Jews. 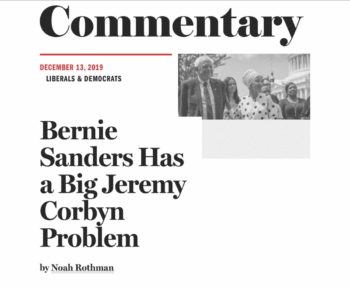 And this is not over. This show is coming to the USA. In fact, it’s already here-being rolled out against Bernie Sanders, even as I write this.

Yep, Bernie. A Brooklyn Jew from a Jewish-Yiddish immigrant family? An antisemite? Sounds absurd. But that’s the line that they’re running with. And there’s no reason why it won’t work with a lot of people—especially those who are uncomfortable with Bernie’s mildly leftwing politics.

Just like with Corbyn, it’s a smear that been bouncing around for a long time. But it’s now quickly building momentum and moving from the Jewish extremist and Republican fascist right to the neocon establishment and on to the Democratic Party center. And just like with Corbyn, American Jews are going to play a central role—weaponizing their Jewish identity in a battle that has nothing to do with Jews, Judaism, or antisemitism.

“Anyone to my left is an antisemite.” We’re going to see a lot of this as we get closer to the election.