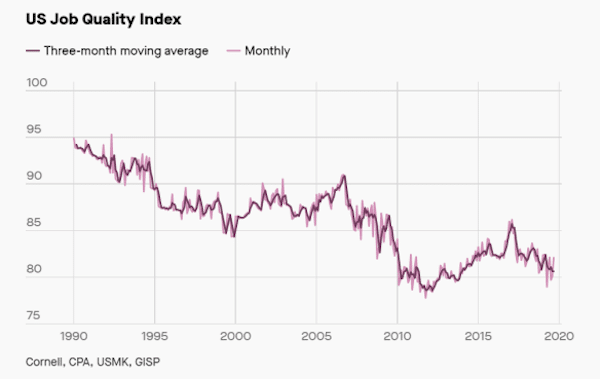 The current U.S. economic expansion, which began a little over a decade ago, is now the longest in U.S. history. But while commentators celebrate the slow but steady growth in economic activity, and the wealthy toast continuing strong corporate profits, lowered taxes, and record highs in the stock market, things are not so bright for the majority of workers, despite record low levels of unemployment.

The fact is, despite the long expansion, the share of workers in low-wage jobs remains substantial. To make matters worse, the share of low-quality jobs in total employment seems likely to keep growing. And, although U.S. workers are not unique in facing hard times, the downward press on worker well-being in the U.S. has been more punishing than in many other advanced capitalist countries, leaving the average U.S. worker absolutely poorer than the average worker in several of them.

According to a recent Bookings report by Martha Ross and Nicole Bateman, titled Meet the Low-wage Workforce,

Low-wage workers comprise a substantial share of the workforce. More than 53 million people, or 44 percent of all workers ages 18 to 64 in the United States, earn low hourly wages. More than half (56 percent) are in their prime working years of 25-50, and this age group is also the most likely to be raising children (43 percent).

Ross and Bateman draw upon the Census Bureau’s 2012-2016 American Community Survey 5-year Public Use Microdata Sample to identify low-wage workers. Although their work does not incorporate the small increase in wages between 2017-2019, they are confident that doing so would not significantly change their findings.

Their workforce definition started with all civilian, non-institutionalized individuals, 18 to 64 years of age, who worked at some point in the previous year (during the survey period) and remained in the labor force (either employed or unemployed). They then removed graduate and professional students and traditional high school and college students, as well as those who reported being self-employed or earning self-employment income and those who worked without pay in a family business or farm. This left them with a total of 122 million workers.

Their definition of a low-wage worker started with the “often-employed threshold” of two-thirds the median hourly wage of a full-time/full year worker, with one major modification. They used the male wage because they wanted to establish a threshold that was not affected by gender inequality. They identified anyone earning a lower hourly wage as a low-wage worker.

The average national threshold across their five years of data, in 2016 real dollars, was $16.03. They then adjusted this value, using the Bureau of Economic Analysis’s Regional Price Parities, to take into account variations in the cost of living in individual metropolitan areas. The adjusted thresholds ranged from $12.54 in Beckley, West Virginia to $20.02 in San Jose, California. Using these thresholds, the authors found that 44 percent of the workforce, some 53 million workers, were low-wage workers. 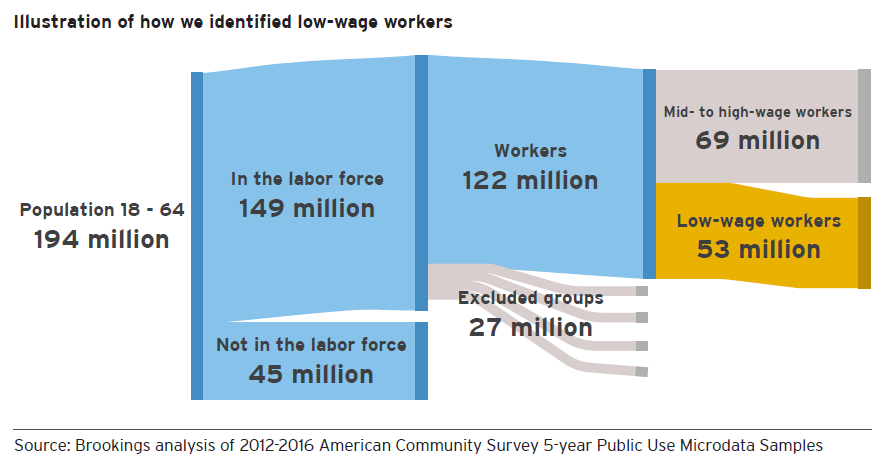 These low-wage workers were a racially diverse group.  Fifty-two percent were white, 25 percent Latinx, 15 percent Black, and 5 percent Asian American. Both Latinx and Black workers were over-represented relative to their share of the total workforce.

Finally, as the authors also note, the economic mobility of low wage workers appears quite limited. They cite one study that “found that, within a 12-month period, 70 percent of low-wage workers stayed in the same job, 6 percent switched to a different low-wage job, and just 5 percent found a better job.”

The downward movement in a new monthly index, the job quality index (JQI), makes clear that economic growth alone will not solve the problem of too many workers employed in low-wage work. The index measures the ratio of high-quality jobs (those that pay more than the average weekly income) to low quality jobs (those that pay less than the average weekly income).  The index steadily declined over the past three decades, during periods of expansion as well as recession, from a ratio of 94.9 in 1990 to a ratio of 79.0 as of July 2019 (as illustrated below).

The process of creating the index and its usefulness is described in a recent paper authored by Daniel Alpert, Jeffrey Ferry, Robert C. Hockett, Amir Khaleghi. The index itself is maintained by a group of researchers from Cornell University Law School, the Coalition for a Prosperous America, the University of Missouri-Kansas City, and the Global Institute for Sustainable Prosperity. As the authors note, the most prominent factor underlying the three decade fall in the ratio is the “relative devaluation” of U.S. labor. 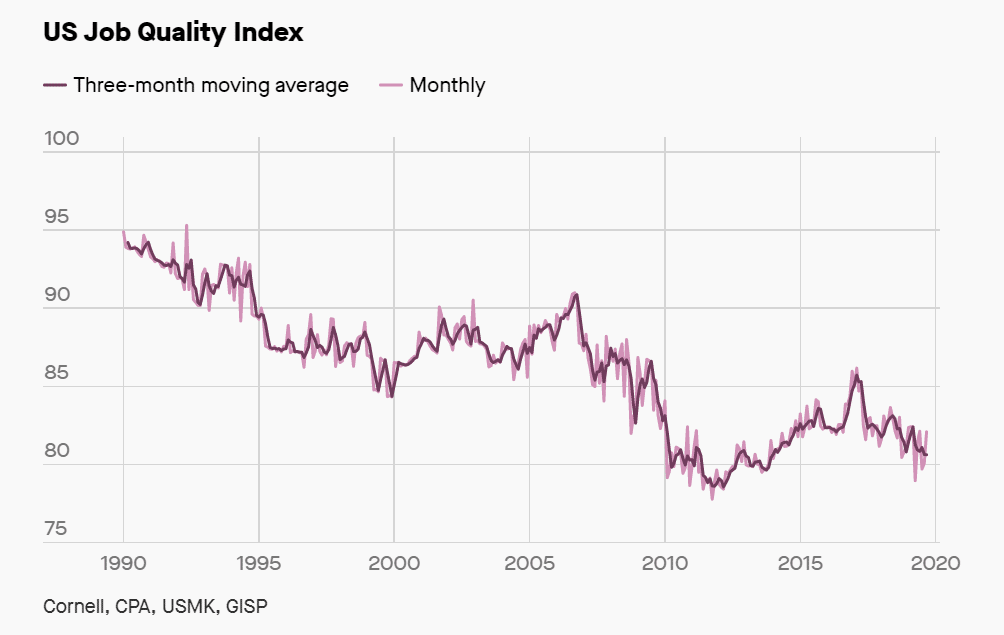 The index tracks private sector jobs provided by third party employers, which excludes self-employed workers, and, for now, covers only production and nonsupervisory (P&NS) positions, which account for approximately 82 percent of total private sector jobs in the country.

JQI itself is a fairly simple measure. The index divides all categories of jobs in the U.S. into high and low quality by calculating the mean weekly income (hourly wages multiplied by hours worked) of all P&NS jobs and then calculates the number of P&NS jobs that are above or below that mean. An index reading of 100 would indicate an even distribution, as between high- and low-quality jobs. Readings below 100 indicate a greater concentration in lower quality (those below the mean) positions, and a reading above 100 would greater concentration in high quality (above the mean) positions.

Recognizing that some groups are quite large and include a wide range of jobs hovering around the mean, the JQI is further adjusted by disaggregating those particular groups into subgroups. The average income of each of those subgroups is then compared with the mean weekly income derived from the entire sample to determine whether the positions should be classified as high or low quality jobs.

The decline confirms sustained and steadily mounting dependence of the U.S. employment situation on private P&NS jobs that are below the mean level of weekly wages. . . .

Notably, movements in the JQI are not particularly correlated with recession; it is important to note that the first big decline occurred during the expansion of the late 1990s. The index was steady during the 2001 recession, and its second big decline occurred during and after the Great Recession. There is admittedly some cyclical patterning evidenced in the JQI output, but this is overwhelmed by a larger secular phenomenon.

Not only are U.S. workers facing a labor market increasingly oriented towards low-wage employment, the resulting downward pressure on wages appears to be proceeding at a more rapid pace in the U.S. than in other countries. As a consequence, a majority of U.S. workers are now poorer, in real terms, than many of their counterparts in other countries.

For example, in a study comparing income inequality in France and the US, the economists Thomas Piketty, Emmanuel Saez, and Gabriel Zucman found that the average pre-tax national income of adults in the bottom 50 percent of the income distribution is now greater in France than in the United States. While the bottom 50 percent of incomes were 11 percent lower in France than in the U.S. in 1980, they are now 16 percent higher.. Moreover, 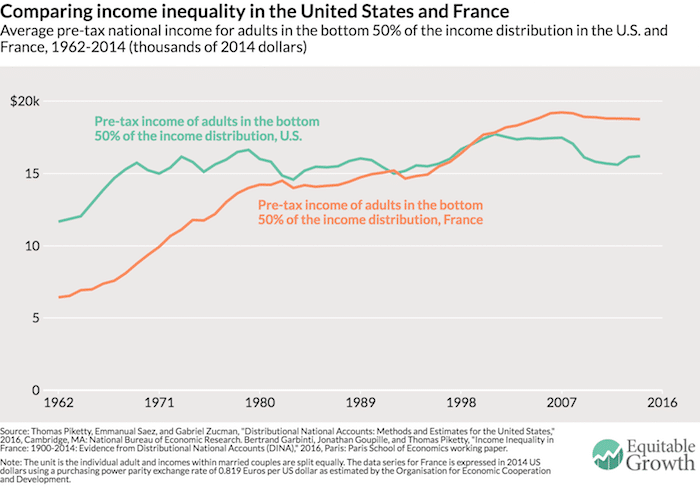 A recent study by the Center for the Study of Living Standards finds that growing numbers of U.S. workers are also falling behind their Canadian counterparts. More specifically, “the study compares incomes in every percentile of the income distribution, and finds that up through the 56th percentile Canadians are better off than their U.S. counterparts.” 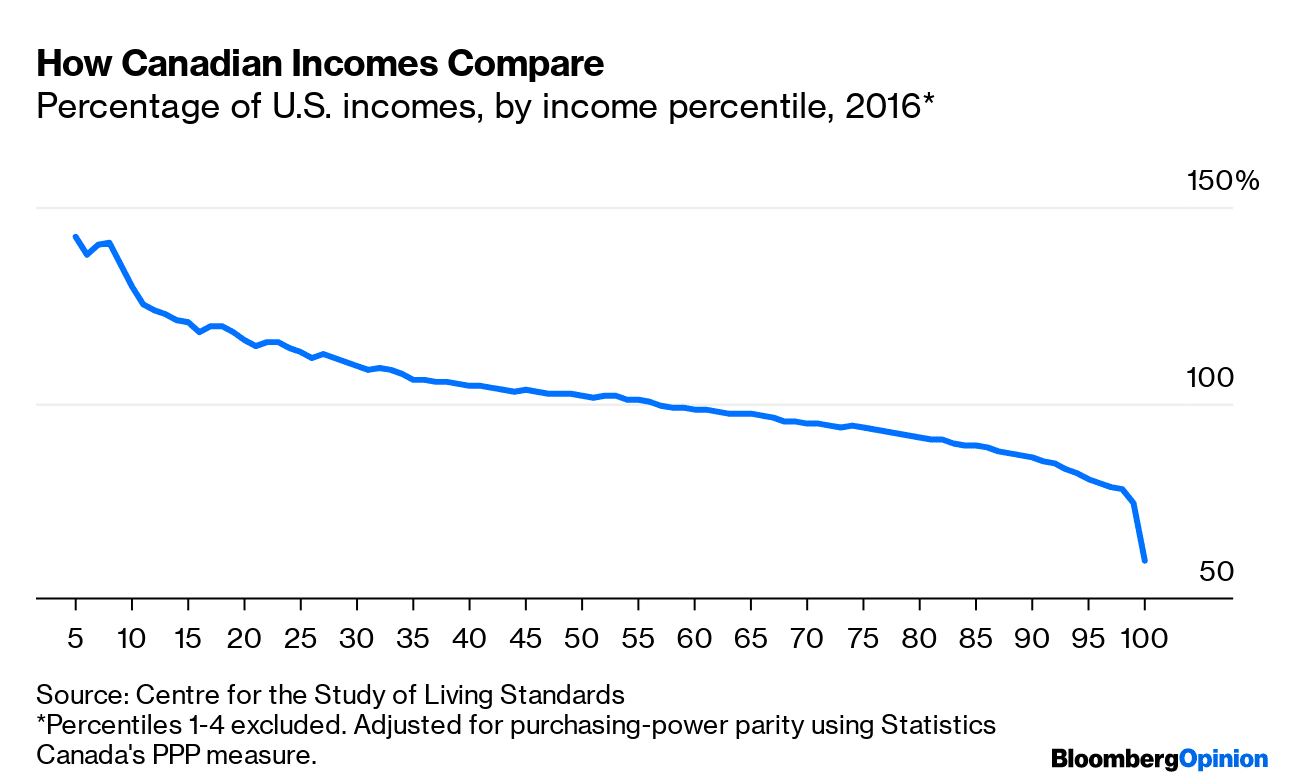 The study’s author, Simon Lapointe, in words that echo the comments of Piketty, Saez, and Zucman, adds:

Our income estimates may actually underestimate the economic well-being of Canadians relative to Americans. Indeed, Canadians usually receive more in-kind benefits from their governments, including notably in health care. Had these benefits been included in the estimates, the median augmented household income in Canada would likely surpass the American median by a greater margin. While these benefits also come with higher taxes, the progressivity of the income tax system is such that the median household is most likely a net beneficiary.

There are many reasons for those at the top of the U.S. income distribution to celebrate the performance of the U.S. economy and tout the superiority of current U.S. economic and political institutions and policies.  Unfortunately, there is a strong connection between the continuing gains for those at the top and the steadily deteriorating employment conditions experienced by growing numbers of workers. Hopefully, this economic reality will become far better understood, leading to a more widespread recognition of the need for collective action to transform the U.S. economy in ways that are responsive to majority interests.