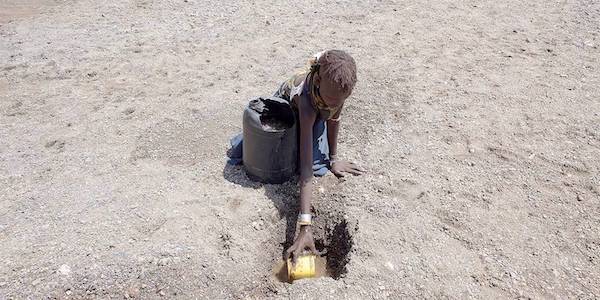 LODWAR, KENYA – NOVEMBER 09: A young girl from the remote Turkana tribe in Northern Kenya digs a hole in a river bed to retrieve water. on November 9, 2009 near Lodwar, Kenya. Over 23 million people across East Africa are facing a critical shortage of water and food, a situation made worse by climate change. The traditional nomadic life of the pastoralist is coming under increasing pressure in northern Kenya from repeated droughts and political marginalisation. As a result, communities are forced to settle near the remaining water sources, overburdening the scarce reserves. Oxfam are responding to this crisis with a programme of water and food aid, distributed through relief centres in the region. (Photo by Christopher Furlong/Getty Images)

In 2015, United Nations member states adopted the Sustainable Development Goals, which include an imperative to “ensure availability and sustainable management of water and sanitation for all.” Yet, in the last four years, matters have deteriorated significantly.

NEW DELHI–The dangers of environmental pollution receive a lot of attention nowadays, particularly in the developing world, and with good reason. Air quality indices are dismal and worsening in many places, with India, in particular, facing an acute public-health emergency. But as serious as the pollution problem is, it must not be allowed to obscure another incipient environmental catastrophe, and potential source of future conflict: lack of access to clean water.

We may live on a “blue planet,” but less than 3% of all of our water is fresh, and much of it is inaccessible (for example, because it is locked in glaciers). Since 1960, the amount of available fresh water per capita has declined by more than half, leaving over 40% of the world’s population facing water stress. By 2030, demand for fresh water will exceed supply by an estimated 40%.

With nearly two-thirds of fresh water coming from rivers and lakes that cross national borders, intensifying water stress fuels a vicious circle, in which countries compete for supplies, leading to greater stress and more competition. Today, hundreds of international water agreements are coming under pressure.

China, India, and Bangladesh are locked in a dispute over the Brahmaputra, one of Asia’s largest rivers, with China and India actively constructing dams that have raised fears of water diversion. India’s government has used water-flow diversion to punish Pakistan for terrorist attacks. Dam-building on the Nile by Ethiopia has raised the ire of downstream Egypt.

And cross-border conflicts are just the beginning. Water-related tensions are on the rise within countries as well, between rural and urban communities, and among agricultural, industrial, and household consumers. Last year, water scarcity fueled conflicts in parts of eastern Africa, such as Kenya, which has a history of tribal clashes over access to water.

In fact, there are long histories of conflict over the waters of many major rivers, including the Nile, the Amazon, the Mekong, and the Danube. But the severity and frequency of such conflicts are set to increase, as climate change alters rainfall patterns, leading to more frequent, intense, and prolonged droughts and floods.

Making matters worse, dwindling water reserves are increasingly contaminated by industrial pollutants, plastics and other refuse, and human waste. In middle-income countries, less than one-third of wastewater is treated; in low-income countries, the share is much smaller. Roughly 1.8 billion people get their drinking water from feces-contaminated sources. The depletion of aquifers and inadequate investment in water infrastructure are exacerbating these problems.

Water stress affects everyone, but the agricultural sector–which accounts for 70% of all water consumption globally, and as much as 90% in the least-developed countries–is particularly vulnerable to constrained supplies. Lack of water makes it difficult to keep livestock, since every drop has to be preserved for crops or human consumption.

Urban areas are also headed for disaster. Last year, Cape Town, South Africa, faced such severe water shortages that it began preparations for a “day zero,” when the municipal water supply would be shut off. (Thanks to supply restrictions and other government measures, that day never came.) Similarly, Mexico City has struggled with a water crisis for years.

Indian metropolises are lurching toward even bigger catastrophes. A 2018 government report warned that 21 cities (including the capital, Delhi, and the information-technology hub Bengaluru) would reach zero groundwater levels by next year, affecting at least 100 million people.

As with climate change, the most severe consequences of water stress disproportionately affect those in the world’s poorest regions–especially Africa and South and Central Asia–who contributed least to the problem. In one part of rural Maharashtra, India, women and girls walk up to 25 kilometers (15.5 miles) per day to collect drinking water. In other villages, as local wells run dry, households have had to designate a member to be on full-time water-collection duty. Wealthier families might pay someone else to do the job, but most households do not have that luxury.

Meanwhile, the advanced economies not only avoid many of the consequences of water stress (at least for now); they also maintain the lifestyle excesses that have propelled climate change and environmental degradation, including water depletion. Rice cultivation is often cited as a major water guzzler, but a kilo (2.2 pounds) of beef requires five times more water to produce than a kilo of rice, and 130 times more than a kilo of potatoes. And since agricultural crops account for a significant share of many developing countries’ exports, these countries are, in a sense, exporting the limited supply of water they have.

Moreover, current land grabs in Africa are actually about water, with foreign investors targeting areas with big rivers, large lakes, wetlands, and groundwater, and thus with high agricultural potential and biogenetic value. (As it stands, less than 10% of Africa’s irrigation potential is being used.)

In 2015, United Nations member states adopted the Sustainable Development Goals, which include an imperative to “ensure availability and sustainable management of water and sanitation for all.” Yet, in the last four years, matters have deteriorated significantly. The international community might be able to fool itself for a while–as it has proved so adept at doing, not least with regard to environmental destruction–but the threat of water wars is only drawing nearer. For many in Africa, Asia, and elsewhere, it has already arrived.