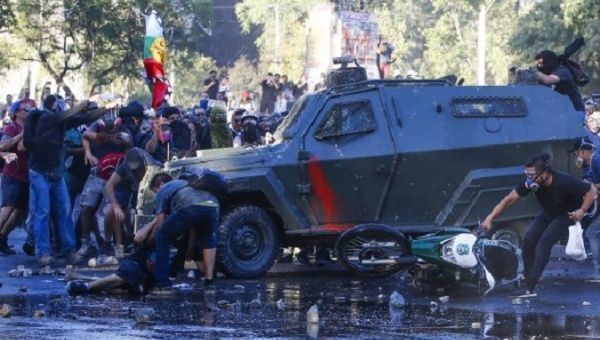 Real-time scenes evidenced once again how the Chilean state acts with rampant and absurd violence.

During the protests that took place at Dignity Square on Friday, Chile’s Military Police deliberately ran over Oscar Perez, a young citizen who was crushed between two armored vehicles. The scenes of the police attack were broadcast live on local television.

In the video, it can be seen that while an armored car closes Oscar’s way, the other armored car takes a turn, accelerates towards the citizen, attacks him, and runs him over his back. Stated differently, the police used two armored cars to run a “hammer-and-anvil​​​​​​” move against an unarmed civilian.

“Criminals! President Piñera. Blumel and Mayor Guevara have to respond!” was the outraged and immediate reaction that local outlet Piensa Prensa echoed.

A few seconds later, when the two armored cars stopped crushing their victim, the 20-year-old man fell immediately to the floor. He was then assisted by other citizens who removed him from the street.

Needless to say, neither of the two armored cars had license plates or painted numbers that could allow their subsequent identification. Total impunity.

Update (1:49 pm): We talked to the family of the young man hit by military police officers at Dignity Square. He is at Las Condes hospital. He has 4 fractures in the pelvis, internal bleeding, bladder involvement. Doctors keep examining him.

Hours earlier, Chilean authorities deployed over a thousand military police officers to Dignity Square in Santiago, the site that has become the symbol of resistance to the neoliberal state and President Sebastian Piñera.

Such deployment was framed within a “zero-tolerance-to-protesters” policy, which was announced by Metropolitan Region mayor Felipe Guevara, who “unleashed” the military police to “sweep” the area.

“My son Oscar was brutally and intentionally run over and crushed by two armored cars. He is miraculously alive. This barbarism, which is endorsed by the Interior monster and the Chilean state, must stop!” Marta Cortez, the mother of the run-over citizen, tweeted.

On Friday, local media published data from a recent survey revealing that 65 percent of Chileans disapprove of the behavior of the military police, which is the lowest level of acceptance that this institution has had in its 92 years of existence.

Since the social unrest began on Oct. 18, Chileans have been subject to a systematic violation of their human rights.​​​​​​​

Although he has cancer, he protests. He has written the disease he is carrying along with his demand for better health care in Chile. He does not run or carry blunt objects in his hands. However, he is about to be hit in his back by a criminal institution! Dignity Square.

According to Hugo Fruhling, director of the Institute of Public Affairs at the University of Chile, criticism from international organizations has been a blow to the reputation of the military police.

“During the Augusto Pinochet dictatorship (1973-1990), the Chilean society strongly distrusted the military police due to its repressive role; however, this institution had had a good reputation since the return to democracy,” Fruhling said and added that the State must implement “serious and consensual reforms” to improve its reputation.

On Dec. 13, the UN Human Rights Office mission concluded that the military police violated human rights on multiple occasions by making “excessive or unnecessary” use of force.

The mission found that Chilean security forces were involved in torture, sexual violence, and arbitrary detentions. Since Oct. 18, at least 28,000 people have been arrested, 1,610 of whom remain in prison.​​​​​​​