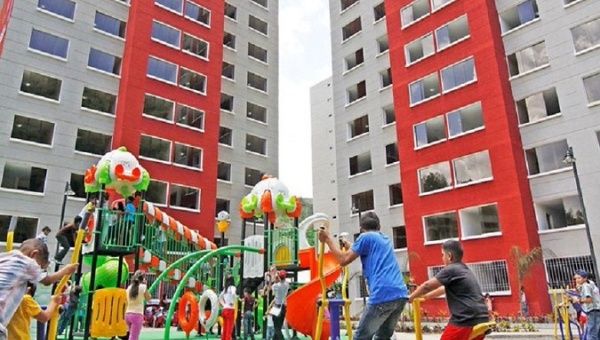 Venezuela’s President Nicolas Maduro Thursday announced that the Venezuelan Great Housing Mission (GMVV) achieved its 2019 goal by completing the delivery of 3 million dwellings to the Bolivarian people as planned.

“Despite the Imperialist economic, trade and financial blockade, which robbed us of so many resources in 2019, the construction industry did not stop,” Maduro said at an event in the state of La Guaira where he handed over the keys of the dwelling number 3 million to a local family.

The Bolivarian president also mentioned that community-led dwelling construction has become the new method to increase the supply of residences.

What a beautiful moment! On Dec. 26 we met the goal set by our Commander Chavez: to build 3 million dwellings for the joy and happiness of the Venezuelan people. Blessed is the day the Venezuelan Great Housing Mission (GMVV) was born, which aims to deliver 5 million homes and much more.

“Following our original proposal with a greater decision, we will deliver land to the people so that they can get involved in the construction of houses,” Maduro said and explained that 70 percent of the residences will be built through this community-based construction method.

The Venezuelan president also announced that the banking system will increase the amount of loans for purchasing dwellings, constructing residences or making house improvements.

The Venezuelan Great Housing Mission​​​​​​​ was created in 2011 by the late Venezuelan President Hugo Chavez and its mission is to reduce the country’s housing deficit.​​​​​​​