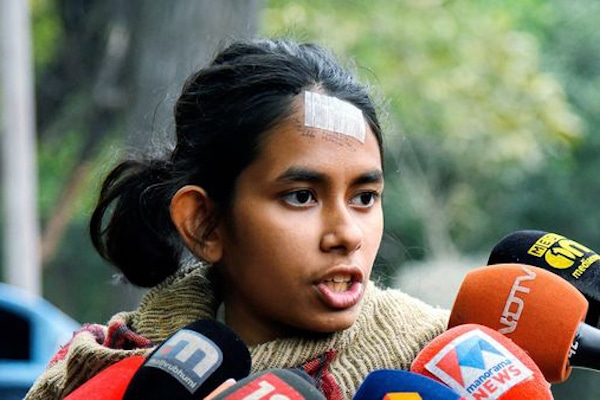 With her head bandaged and her arm in a sling, university student Aishe Ghosh went before the cameras to say that the students of the university she attends in New Delhi would move “not an inch back.” The students would continue to agitate to defend Jawaharlal Nehru University (JNU) and its union, and to fight against the divisive and toxic politics of the government of Prime Minister Narendra Modi.

Before Modi’s Bharatiya Janata Party won the 2014 parliamentary elections, he would brag that he had a 56-inch chest; Modi is a large man, his girth a measure—we were told—of his strength, and his machismo. Twenty-five-year-old Aishe Ghosh, president of the Jawaharlal Nehru University Students’ Union (JNUSU), is much smaller than Modi and has no need to brag in this way. When she says that she will not move “an inch back,” her eyes glint with both amusement and determination. You have already hit me with your iron rods, she seems to be saying, and I am still here; your violence cannot silence me.

On January 5, a group of masked men and women roamed the gated campus of JNU with iron rods and other weapons. They apparently targeted left-wing students, including Aishe Ghosh, who later said, “I was continually hit on the head with iron rods. … They were about to lynch us.” Ghosh is a leader of the Students’ Federation of India (SFI), a mass organization of the Communist Party of India (Marxist). In September 2019, she won the post of the presidency of the student union on a Left Unity platform. She had previously been a councilor for the School of International Studies, where she is working to get her Ph.D. It was clear from the very first that these armed attackers seemed to pick out the communist students for special punishment.

Initially, the Indian government suggested that it was the Left that had been the author of the violence. The Delhi Police even went so far as to charge Ghosh for an attack on the JNU computer server; the police did not seem to want to investigate the attack on the university, nor on the bizarre way in which the private security on the campus seemed cavalier as terror reigned around them. It was obvious to the victims that the masked attackers came from the BJP’s student wing, the Akhil Bharatiya Vidyarthi Parishad (ABVP); the magic of social media meant that students quickly identified one or two of these attackers and put their names online. The Delhi Police sat on its hands, making noises against the Left rather than against these students of the ABVP.

The news channel India Today spoke to the alleged masked attackers, who admitted that they came from the ABVP. They said their aim was to smash the Left, their animosity in full display. It is hard to watch these young people speak with such confidence and with such chilling precision about their desire to hurt those with whom they did not agree. It was not that Aishe Ghosh and Nikhil Mathew and other Left activists merely crossed their assailants’ path; these masked men and women apparently went in search of them, their purpose to beat them into submission.

It’s easy to guess where these young suspected masked attackers—all of them students—took their lessons from. The Indian Home Minister Amit Shah spoke about the ongoing protests in Delhi a week and a half before this attack. Shah and the far-right had coined the term “tukde tukde gang” to speak of the Left—the phrase implying that the Left wants to break India into pieces (tukde tukde); it is the Left, Shah has long said, that is anti-national, and therefore it needs to be eradicated. He told his Delhi audience that “it’s time to teach Delhi’s tukde tukde gang a lesson” and that it is time “to punish the tukde tukde gang… People in Delhi should punish them.” Taught a lesson, be punished: this is an incitement to riot, an incitement listened to by the ABVP activists suspected to be involved in the attack, Akshat Awasthi, Rohit Shah, Komal Sharma, Vikas Patel, and Shiv Poojan Mondal. No operational connection has been established between the BJP high command—including Amit Shah—and the masked attackers on the campus, but it is clear that there is a straight line that unites them ideologically and politically. Shah’s language about lessons and punishment should not go without investigation.

The Delhi Police is under the direct control of Amit Shah. In the India Today sting, Akshat Awasthi, “who identified himself as an AVBP activist and confessed to his role in the JNU campus attack,” is asked by the reporter, “So, the police helped you, the ABVP?” Awasthi asked in turn, “Whose police is it, sir?” He meant that the police are on the side of the ABVP and said that while the police were inside the campus, Delhi’s deputy commissioner of police asked the activists to “hit” the students. This is incendiary stuff, with the far-right Indian government of the BJP being implicated in the violent attack on the JNU campus.

I have known Aishe Ghosh for some years now. A brilliant student who did her bachelor’s degree at Daulat Ram College (Delhi University), Aishe came to JNU to study international relations. It is impossible to be a JNU student and not be somehow involved in politics. Debate and discussion saturate the campus, from the day-long discussions at the tea shops to the late-night talks at the dining halls. Posters on all kinds of issues have long been a permanent feature on the campus walls, and marches are a regular occurrence. The university’s students’ union—JNUSU—has kept this campus democratic for its entire history, and the student elections are one of the best examples of the democratic process anywhere in the world.

JNU, like the other central universities, draws the finest students from a variety of class backgrounds; they are able to come and study because the costs are held down by student struggle and social pressure. Over the past several decades, governments committed to neoliberal policy have tried to raise the fees and change the character of JNU, and of the other central universities. Mass student resistance is not what they anticipated; most of this resistance has been given organizational shape by the Left student groups. People like Aishe Ghosh, who run from meeting to meeting organizing the resistance, have been key to the fight to keep their universities democratic; that is precisely why they are the target of the far-right.

When I first met her, she told me that she comes from the West Bengal town of Durgapur. After she was attacked, there was a protest march in solidarity with Aishe in Durgapur, which has a long history of strong trade union and communist politics. Her parents—Sharmistha and Debashish—as well as her grandparents defend her fully. In the 1950s, the Indian government developed Durgapur as the epicenter of modern industry, since it was not far from the coalfields of Asansol and Raniganj as well as the iron ore region of Burnpur and Kulti. Strikes were a constant feature at the steel plants and the coking coal plants. These were political strikes, not only for wages. In 1959, Durgapur workers took an active role in the Food Movement, which developed across West Bengal as a consequence of the starvation of the poor. There was a major strike in the city in 1961 that combined basic issues for the workers (wages, conditions) with the food crisis and against the pogroms in Assam. Five years later, Durgapur rose up against retrenchment and the destruction of the industry. Police violence led to the death of a popular union leader, Jabber, and to the shooting death of another worker, Ashish. The unions called for a general strike that ran for nine days, during which the workers marched with the mud from Jabber’s grave across the city. This was the soil from which Aishe Ghosh emerges.

Amit Shah and Aishe Ghosh stand at two ends of the Indian experience. The former—Amit Shah—represents the world of money and iron rods, a world of wealth and intimidation. While he studied biochemistry at CU Shah Science College in Ahmedabad (Gujarat), he joined the ABVP and rose rapidly to become a leader. Akshat Awasthi would be familiar to him; they share a temperament and an ethos. Aishe Ghosh is also familiar to them; she is the student leader who stands against them, who represents decency and democracy. The rods of the right wing are aimed at her head. You will hit me, she says, but we won’t pick up sticks; we will fight you with our words.