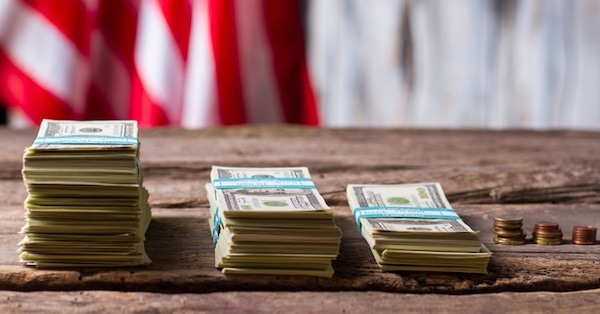 Corporations, special interest groups, and individuals inject billions of dollars into the American political system every year. Much of the financial support in politics is concealed from public view, as some rules–and loopholes–allow “dark money” and undisclosed donors to remain behind a wall. But some of those contributions can be traced via the Federal Election Commission, the IRS, congressional public records offices, and other resources.

The Open Secrets database, for instance, shines a light on this often murky process. The website is the work of the Center for Responsive Politics, whose stated mission is to improve transparency and citizen engagement around the influences of money in public policy. The website uses existing transparency laws to track the finances of candidates, political parties, lobbyists, and outside groups, and it describes ways cash is funneled through the system.

Few seriously question whether fossil fuel money in politics has played a substantial role in climate change and energy policy, and some researchers say it’s the single most important reason climate action has been stalled for decades in the U.S. Investigative reporting by InsideClimate News showed that Exxon and other oil companies have spent more than $5 billion undermining climate science and fighting clean energy policies. It reported in a 2017 article on how money circulated through multiple channels:

The industry sowed doubt for decades about climate science, spending $2.9 billion on advocacy advertising alone in a 10-year period ending in 2015. It spent $1.3 billion more lobbying to shape public policy on energy issues during the same period and has pumped out $827.9 million in campaign contributions since 2000 to elect sympathetic officials at the local, state and federal levels.

While the breadth of fossil fuel spending on climate policy and political issues is not surprising, the scope and scale is perhaps best understood when hard numbers are brought out to daylight. 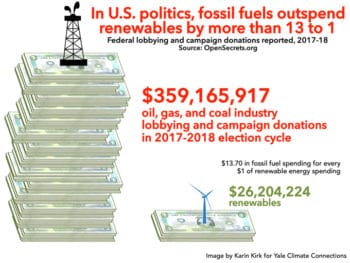 During the 2017-2018 midterm election cycle, corporations, individuals, and trade groups in the fossil fuel industry spent $265,773,915 in lobbying and $93,392,002 in contributions to national-level candidates, parties, and outside groups, bringing the total spending by the industry to more than $359 million in two years. That’s nearly $500,000 per day.

During the same period, renewable energy companies spent $26 million. So for every dollar spent on behalf of wind, solar, or hydroelectric energy interests, approximately $13.70 was spent by fossil fuel interests on energy and climate-related issues.

Those figures do not include all lobbying spending because of complex rules, and the Open Secrets database reflects only money circulating at the federal level, but the same things are at work in state-level offices. For instance, on recent statewide ballot initiatives the oil, gas, and coal industries spent $31 million in Arizona and $30 million in Washington to defeat clean energy measures. And at the same time, fossil fuel companies spend to directly influence the public via the airwaves, mailings, astroturf organizations, and social media campaigns. 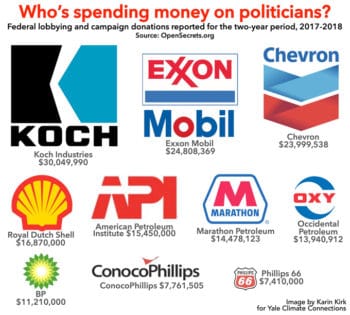 The leading campaign donors and lobbyists are power houses in the fossil fuel industry, led by Koch Industries, which gave more than $10 million to campaign coffers in the 2018 midterms and used another $20 million for lobbying efforts in 2017 through 2018. ExxonMobil and Chevron ranked second and third in spending, and ExxonMobil was the largest energy lobbyist in that two-year period, spending more than $22 million on strategic messaging with political leaders. 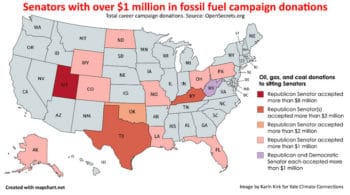 U.S. senators representing principal fossil fuel-producing states, not surprisingly, have accumulated the largest sums from the industry. Those who have made presidential bids received the largest corporate donations. For example, Mitt Romney has received more fossil fuel money than any other U.S. senator, with a career total $8.5 million from oil, gas, and coal interests. About $6.9 million of this money was received during his 2012 presidential race. All told, Romney’s fossil fuel funding is more than double that of any other federal lawmaker; a typical family in Romney’s adopted home state of Utah would have to work for 125 years to earn the money he has been given by these industries.

Fossil fuel money in politics tilts overwhelmingly toward Republicans. Oil and gas companies give 87% of their donations to Republicans, coal companies 95% of their campaign funds to GOP politicians. In listing currently serving U.S. senators with the most backing from fossil fuel interests, it’s not until the 17th slot that a Democrat appears, Joe Manchin of West Virginia.

Current Senators with over $1 million in campaign contributions from the fossil fuel industry:

But Democrats have also received fossil fuel financial backing. Barack Obama ranks No. 7 and Hillary Clinton No. 11 on the list of current and former senators with the most funding from the oil and gas industry, with over $2 million of campaign donations to Obama and $1.5 million to Clinton. As with Romney, most of these donations were made during their presidential campaigns.

How do your U.S. senators and others stack up?

The Open Secrets website is fairly intuitive to search, and a few minutes searching on a candidate, elected official, PAC, or corporation will likely yield rewarding results. For example, the database makes it easy to check on one’s own senators by looking at their funding from oil and gas and coal mining corporations. Members of the U.S. House of Representatives can be similarly tracked to show their oil and gas and coal mining funding connections.

Other avenues for exploration are the donors, recipients, and lobbying activities in specific industries. Useful starting points are oil and gas, coal mining, or alternative energy. Note that the alternative energy sector includes biofuels, nuclear energy, and a few natural gas companies, along with renewable energy companies. In order to tally the financial involvement of the renewable energy sector, one needs to evaluate each specific company within the alternate energy category and winnow out those related to wind, solar, hydropower, batteries, and grid management.

Those interested can also explore the involvement of a specific corporation, such as Koch Industries, ExxonMobil, or Chevron. The database shows the recipients of corporate donations and discloses lobbying activity on specific pieces of legislation.

For state and local offices, the Follow the Money database allows a detailed drill-down into candidates and public officials. With a little digging, it’s not hard to locate campaign contributions for one’s governor or state legislators.

Sleuthing through these records reveals an expansive breadth and depth of corporate funding of elected office holders. Some of them pledge to serve the public interest rather than uphold partisan interests: It’s up to the electorate to evaluate how they’re measuring up to those pledges.