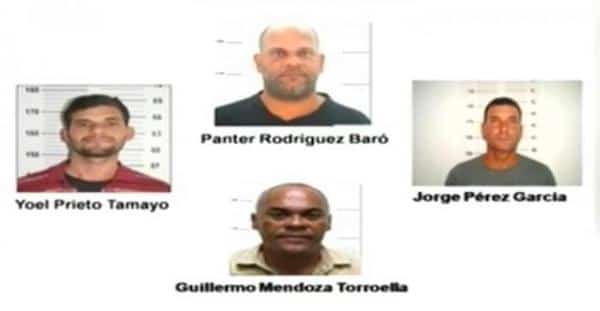 Although the investigation continues, those involved in the defacing of monuments honoring Cuba’s national hero will be prosecuted as established by law. Photo: NTV

An extended report was broadcast on Cubavision television’s nightly news (NTV) yesterday, outlining what is known about the defacing of busts of our National Hero José Martí, January 1 in Havana, and those responsible.

The events have generated a wave of indignation since, as revolutionaries know, anyone who touches José Martí touches the soul of the Cuban people.

The material screened clearly showed the vandals’ true intentions and who else was involved, those who paid for these actions, their faces and names.

They were the perpetuators of events that were reported in short order by authorities, shocking the Cuban people.

While the country was celebrating the advent of the new year and the triumph of the Revolution, Panter Rodríguez Baró and Yoel Prieto Tamayo threw pig’s blood on 11 busts of Martí and three billboards featuring political content, at schools, institutions and public spaces in several Havana municipalities.

THE VANDALS ACKNOWLEDGE THEIR DEEDS

Me and my companion Panter went out to pull off the acts for which I am detained, on busts of Martí.

…I went out walking to cover busts of Martí with blood, in several places in the neighborhood, I continued walking along Boyeros, to 13 or 15 places, more or less, I don’t know exactly.

The first place we did this was at the Antonio Maceo School, which is right there, near where we were.

…Sometimes I threw it (the blood). I threw it almost always, and he carried the backpack, even if he did throw it, he was the one who took the photo and recorded video.

Despite the public outcry at the time of the arrest, there were some who attempted to portray the events as staged, insisting on the suspects’ innocence.

Cuban television reported that counter-revolutionary Aldo Rodríguez Vaquero, of the musical group Los Aldeanos, spoke out in defense of his friend Panter, as acknowledged by both.

NTV aired images of how the two vandals damaged symbols of the Cuban Revolution, deeply hurting patriots who love their country.

In this regard, Lieutenant Colonel Milagros Cabrera Vélez described aspects of the police department’s work following the events:

From the point of view of the identification of persons by their physical features, procedures were followed that made it possible to characterize the clothing and objects they used during the commission of the crimes, as well as their stature based on measurements taken from images obtained from video-surveillance cameras, and the way they walked, which is very specific, very distinctive…

During searches, objects were obtained that were related to elements characterizing the criminal acts.

In the case of citizen Panter, a search was carried out in a garage where objects containing substances were confiscated, which in this case were found to be drugs, and specifically the content found in cans was cocaine.

But why did the vandals document their actions with video and photos? What was their goal in publishing such behavior? How is it possible that a minority with a long history of subversive activity against Cuba announced their support for such actions almost immediately, after they were made public on social media?

During the process of investigation, the whole truth has emerged.

He told me he had a job… let’s do this little job like this, on busts of Marti… for a little bit of cash to have a good time on New Year’s Eve…

The person who called me in the beginning was a friend of mine, whose name is Ana Olema.

Ana Olema is a friend of Panter’s, who according to Panter is an activist who is against the revolutionary process, she is the one who sends the money for these jobs.

ENEMY WORK FROM A MIAMI LAIR

It was reported that Ana Olema Hernández Matamoros is at the service of the United States government and the anti-Cuban mafia based in Florida. Her participation in enemy projects and ties with counter-revolutionary and terrorist organizations identify her as a puppet of subversion.

It is enough to observe her in provocative events on the island, in which she has attempted to promote disorder and civil disobedience, regularly accompanied by criminals and delinquents.

Panter Rodríguez Baró, with a long criminal record, is a prime example.

The money paid the authors of these crimes is a miniscule portion of the 30 million dollars that the U.S. government allocated for subversion in Cuba last year.

Lieutenant Colonel Francisco Estrada explained that as part of the investigation it was established that, during 2019, the accused received more than $1,000 for such acts, transferred through Western Union by Ana Olema and her spouse, also linked to activities of this type.

Of this amount, $600 was specifically for the January 1 vandalism, received by Panter himself.

Investigators also established that Panter Rodríguez Baró and Yoel Prieto Tamayo were responsible for acts of vandalism committed in February of 2019, when they were recorded by a camera near the University of Havana, placing a counter-revolutionary sign against the new Constitution, as directed, and paid, by the same persons in the United States.

Additionally involved in the defacing of monuments to Martí were Guillermo Mendoza Torroella, who lent the suspects his cell phone to document their acts, and Panter’s cousin, Jorge Ernesto Pérez García, whose role was to establish communication via Internet with Ana Olema and send her the photos and video.

Another citizen named Leonel Fernando Cardoso Freire, a Cuban living in Miami, served as the public face abroad, publishing on Facebook the work of an alleged, misnamed underground cell on the island.

This is how the dirty media maneuver – attempting to portray the environment in Cuba as turbulent and violent–was discredited, since these are not random events, but rather paid for by a government that does not understand our independence or sovereignty.

But there is no media campaign that can succeed in confusing or defeating a cultured people, educated in Marti’s ideals.

Members of the Federation of Cuban Women and the local Committee for the Defense of the Revolution, along with students from the municipality of Plaza de la Revolución, condemned the offensive defacing of the Apostle’s image, placing a floral wreath on the grounds of the building housing the magazine Bohemia, known as the Cuban family’s magazine, where a bust of José Martí’s was vandalized by individuals far removed from our revolutionary project.

…the people of Cuba are in the streets, young people, the elderly, women and children are standing up to tell them: Don’t mess with Martí.

The television report showed how the counterrevolution functions in the Internet age, making the same calls for terrorism, just as the Cuban American Foundation did in the 1990s.

The investigation is still underway, but it is clear that those involved in these events will be prosecuted as established by law. And there is no doubt that these common criminals, who went so far as to attack images of Martí, are mere instruments being used to justify aggressive U.S. policies toward Cuba.

Also exposed are media personalities, who live off the lucrative business of subversion in Cuba. We could ask: If in another era, eight medical students were unjustly murdered for allegedly vandalizing the grave of a Spanish hero, what do these servants deserve? Fortunately for them, the Cuban Revolution is just, respects life and believes in human betterment.

Martí taught us this too, the same Martí whose image will never be tarnished, and who is constantly reborn in his people.