NBC’s Camel News Caravan was one of the earliest television news programs in the United States. Sponsored by Camel Cigarettes, the program had an anchorman who not only kept an ashtray on his desk and often smoked while delivering the news, but also encouraged viewers to light up a Camel.

Seven decades later, that seems outlandish. But someday it may seem just as strange that news media in the year 2020 accepted advertisements from fossil fuel companies—even as many of their own reporters were diligently covering a climate emergency that is largely caused by the burning of oil, gas, and coal.

National and international scientific panels have issued report after report linking climate change with fossil fuels and detailing its negative human health impacts. Should newspapers, magazines, and other media outlets be helping the oil and gas industry spread messages about climate change that often mischaracterize the science and greenwash the industry’s role?

An online spat. Last month, the New York Times published an excellent interactive article that used images taken by a specialized camera to help readers “see” huge amounts of invisible, climate-altering methane leaking from oil and gas facilities. Independent journalist Amy Westervelt, who produces the climate podcast Drilled, responded on Twitter by praising the Times reporting but criticizing the newspaper for not only publishing ads from fossil fuel companies but also allowing its branded content team to partner with these companies:

All 👏🏼fossil 👏🏼fuel 👏🏼ads are “issue ads,” otherwise known as propaganda. If media outlets are going to not only run but also *make* them, they have to realize that the entire point is to confuse readers about information like this.

John Schwartz, who is a Times climate reporter but did not write the article about methane leaks, responded by citing what is standard practice at the Times and other reputable news organizations—having an institutional firewall that prevents the paper’s advertising side from interfering with news coverage. Westervelt replied that readers cannot easily distinguish between news and advertising, and that oil companies would make their own ads if it wasn’t more effective to work with the branded content teams at newspapers:

John, as I’ve said before, it’s about influencing *readers* not journalists. No firewall exists in readers’ minds. NYT making ads that promote natural gas undermines the great work of its reporters. I think you’d probably agree if it was any other paper

In another tweet, she wondered “is it really too much to ask that media outlets not literally create climate denial campaigns for the fossil fuel industry?”

The Times created a dedicated climate desk within its newsroom in 2017 to produce high-quality journalism at a time when “the calamities caused by climate change seem to be intensifying.” In 2018, the New York Times Magazine devoted an entire issue to a single 30,000-word piece, accompanied by a high-production video, about the battle for climate action. As Schwartz noted in one of his tweets, advertising is a declining source of revenue for the Times. And yet even as papers like the Times and the Washington Post cover climate extensively and thrive financially, they do not shun fossil fuel advertisements.

It would be difficult to find a newspaper or magazine that does. The 17-year-old climate activist Greta Thunberg says she has heard of only one, the Swedish publication ETC:

So far I’ve only heard of one single daily newspaper – @ETC_redaktionen – who has decided to exclude all advertisements regarding fossil products and services.
Who will be the next one? Who will be the first major international newspaper to lead on this?

Tracking fossil fuel ads. Around the same time that Westervelt and Schwartz were debating the ethics of fossil fuel ads, Emily Atkin launched her Fossil Fuel Ad Anthology to track ads. Atkin, an independent journalist who publishes HEATED, “a newsletter for people who are pissed off about the climate crisis,” plans to talk to journalists about fossil fuel advertising and look at the parallels to an earlier era of cigarette advertising, which the New York Times banned in 1999.

In a paper published last month in the journal Climatic Change, Robert J. Brulle and two other researchers at Brown University wrote: “Advertising by fossil fuel companies is a dominant strategy to manipulate environmental discourse and influence political outcomes around climate.” The researchers studied advertising expenditures by five major oil and gas companies from 1986 to 2015 and found that “the factors that most influence corporate promotional spending are media coverage and congressional attention to the issue of climate change.”

House Democratic Committee leaders in Congress are planning to unveil new climate legislation this month, so perhaps it’s no coincidence that the American Petroleum Institute recently launched a new ad campaign called “Energy for Progress” to tout natural gas as “clean” energy and convince a worried public that “the innovators in America’s natural gas and oil companies have teamed up with the country’s brightest minds” to work on climate solutions. In Washington state, BP—the company that once tried to rebrand itself as “Beyond Petroleum”—has launched an ad campaign to promote carbon pricing: 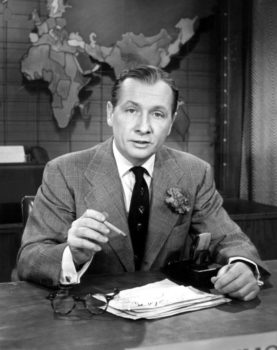 Journalist John Cameron Swayze on the set of the Camel News Caravan, a network news program aired by NBC from 1949 to 1956. Credit- NBC Television

Part of the solution? A recent report by the independent financial think tank Carbon Tracker states that oil and gas companies “have approved $50 billion of investment since 2018 in major projects that undermine climate targets and threaten shareholder returns.” Meanwhile, the industry spent only about 1 percent of its capital expenditures in 2018 on renewables and other low-carbon energy sources, according to the Carbon Disclosure Project.

Can oil and gas companies be part of the solution as well as the problem? A new report from the International Energy Agency (IEA) says it’s possible—if these companies shift their focus from “oil and gas” to “energy” (including low-carbon sources), and “engage with the ‘grand coalition’ that the IEA considers essential to tackle climate change.”

For now, though, oil and gas companies are paying lip service to climate change without making significant changes to how they allocate investments. ExxonMobil, the most carbon-polluting of the investor-owned oil companies, projects no decline in energy-sector emissions over the next 20 years.

It’s unlikely that oil and gas companies would waste money on climate ad campaigns if they had no effect on public opinion. Like tobacco marketing, climate greenwashing works. But cigarette ads were banned from television and radio in 1971, seven years after the first Surgeon General report on the health consequences of smoking. Scientific reports have also documented the public health impacts of climate change, but so far that hasn’t kept fossil fuel ads off the airwaves.