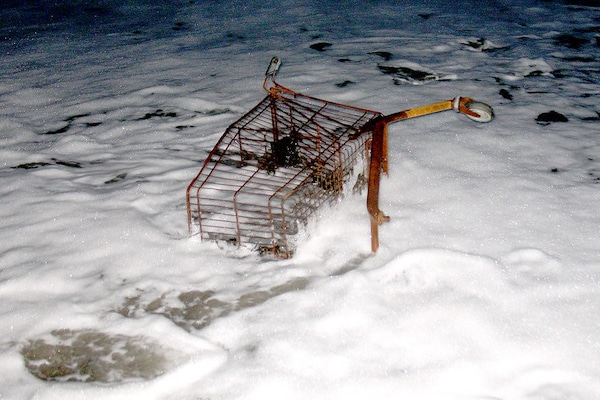 Capitalism’s inherent drive to expand went into overdrive in the mid-20th century. Long-term socioeconomic and Earth System trends, graphed fifteen years ago and updated in 2015, show nearly simultaneous hockey stick upturns in about 1950. 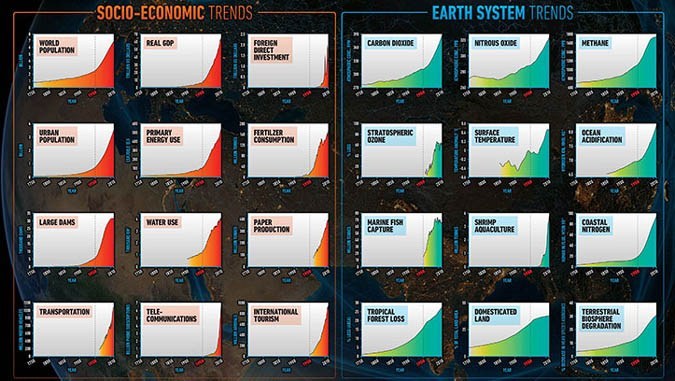 Called the Great Acceleration, the speed-up is driving what Earth System scientists describe as “the most rapid transformation of the human relationship with the natural world in the history of humankind.”1 It marks the beginning of a new historical and geological epoch, the Anthropocene-a time when “human activities have become so pervasive and profound that they rival the great forces of nature and are pushing the Earth into planetary terra incognita.”2

Long ago, Marx and Engels showed that capitalism can never stand still or rest content in one place. In obedience to its first commandment-Accumulate, accumulate!-“it must nestle everywhere, settle everywhere, establish connections everywhere.”3 So it is not surprising that the trends identified in great acceleration research haven’t just continued, they have continued to accelerate. Capital, never content with expanding existing operations, constantly seeks new places and resources to exploit.

It is sometimes suggested that because capitalism has occupied the whole world, there are no more frontiers and no new sources of cheap resources-so peak appropriation has passed, sending the system into terminal decline. Such arguments misunderstand and underestimate the system’s compulsion to find new sources of profit. As Marx wrote, for capitalism, “every limit appears as a barrier to be overcome.” It always strives “to tear down every spatial barrier… and conquer the whole earth.”4

The world’s continents and islands may be fully occupied, but 71% of the planet is still mostly unexplored and underexploited. A new study by scientists associated with the Stockholm Resilience Centre shows that capitalism is now assaulting a new frontier—on, in, and under water.

“The Blue Acceleration: The Trajectory of Human Expansion into the Ocean,” published in January in the journal One Earth, describes and graphs capital’s growing drive to industrialize the oceans and sea beds. Commercial activity in the oceans is expanding rapidly, and “considerable investments … are driving growth in existing industries and the emergence of new ones, spanning an increasingly diverse range of activities.”5

The authors believe that the blue acceleration marks the beginning of “a new phase in humanity’s relationship with the biosphere, where the ocean is not only crucial for sustaining global development trajectories but is being fundamentally changed in the process.”6

They illustrate that claim with 12 graphs that look much like the great acceleration graphs, but with the hockey-stick upturns occurring five decades later. 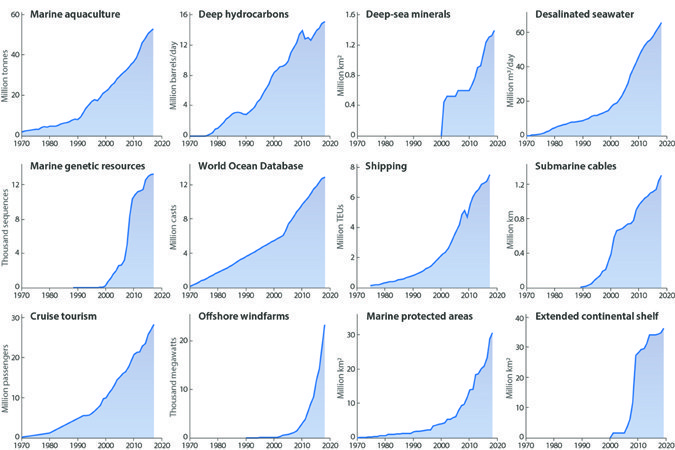 The first two graphs are particularly powerful illustrations of efforts to overcome limits by moving capital and production to previously unexploited locations, and to obtain resources using new techniques and technologies.

Graph A, Marine Aquaculture, shows the spectacular growth of fish farming, which was inconsequential in 1970, but now accounts for nearly 50% of all fish eaten by humans. In the open ocean, wild fish catches have been falling since the 1990s, but that decline has been more than offset by aquaculture, mainly located in coastal areas. Total fish production is larger than ever and fish processing is growing faster than any other food industry.7

Aquaculture grew 10% a year in the late 20th century, and is growing 5.8% a year now. UN Food and Agriculture Organization, The State of the World Fisheries and Aquaculture 2018, 2.

Graph B, Deep Hydrocarbons, shows oil and gas production from the deep sea, which usually means more than 200 meters below the ocean surface. Off-shore extraction already comprises 30% of worldwide oil production, and “as shallow-water fields become depleted and novel technologies emerge, production is moving towards greater depths and new territories, including the Arctic where vast undiscovered oil and gas reserves are expected.” There is also growing industry interest in deposits of natural gas hydrates (crystalized methane) buried kilometers below the ocean floor, that “may represent twice as much organic carbon as the world’s coal, oil and other forms of natural gas combined.” 8

Many of the blue acceleration trends involve new technology. A co-author of the report points out that “the marine biotechnology sector scarcely existed at the end of the 20th century, and over 99% of genetic sequences from marine organisms found in patents were registered since 2000.”9

More generally, as the One Earth article says, “the combination of increasing global demand, technological progress, and declining land-based sources have made extraction of a growing number of ocean materials not only feasible but economically viable.”

Costly endeavors such as commercial mining of the deep seabed are now considered not only feasible but imminent. Likewise, the search for novel bioactive compounds to address antimicrobial resistance is increasingly focused on remote deep-sea microorganisms, whereas space constraints on land have contributed to the construction of large-scale offshore wind farms and investment in deep-water installations….10

Today, offshore production of oil and gas is by far the most lucrative part of the ocean economy, while sand and gravel for construction are the most-extracted offshore minerals, by volume. Deep sea mining has yet to start, but the International Seabed Authority has already issued 29 mineral and metal mining licenses covering 1.3 million square kilometers of ocean floor.11

DeepGreen Metals, based in Canada, claims that the area of the Pacific Ocean seabed covered by its license is “one of the largest undeveloped cobalt, nickel, and manganese resources on the planet.”12 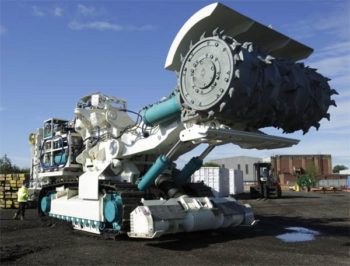 Deep-sea mining companies plan to use immense remote-controlled machines to scrape the sea bed, capture minerals, and dump the leftover sludge. The process will kill uncountable organisms in and beyond the mining zones.

The equipment used directly to extract or produce food, fuel and minerals is only part of the story. Blue acceleration industries also require ever increasing amounts of surface and coastal space for infrastructure, including port facilities, fishing boats, fish farms, offshore platforms, and deep-sea mining equipment. In coming years, such installations may be weakened, if not overwhelmed, by rising sea levels and increasingly powerful storms.

Of course, human societies have used ocean resources for thousands of years, but the blue acceleration appears to mark a new departure.

The current rush for the ocean is unfolding with unprecedented diversity and intensity.… The multitude of claims that collectively illustrate the blue acceleration exhibit a phenomenal rate of change over the last 50 years, with a sharp acceleration characterizing the onset of the 21st century.13

Three of the great acceleration trends identified in 2004 were ocean-related: aquaculture, ocean acidification, and marine fish capture. The first two continue to grow exponentially, while fish capture has levelled off only because overfishing has all but wiped out major fish populations. Combined with greenhouse gas emissions and uncounted other pollutants, the impact of those trends has been dire. Noted conservation biologist Callum Roberts writes that we face “the prospect of seas so compromised that they no longer sustain the ecological processes that we take for granted and upon which our comfort, pleasure, and perhaps even our very existence depends.”14

The blue acceleration study shows that the great acceleration is receiving new impetus from ocean industrialization, which is “paving the way for new risks to emerge and regime changes to occur … [and creating] conditions for unknown thresholds to be crossed.”15

The danger of unpredictable and unpreventable damage is all the greater because so little is known about life and ecology in the deep sea. The far side of the Moon has been better mapped than 95% of the ocean floor, and only a tiny minority of sea-dwelling organisms have been identified, let alone studied.

Nevertheless, cheerleaders for deep ocean development promise all will be well. The World Bank, for example, says that the blue economy will “promote economic growth, social inclusion, and the preservation or improvement of livelihoods while at the same time ensuring environmental sustainability of the oceans and coastal areas.”16 Fine words, but it has little to say about how the oceans can be protected in practice.

In fact, as Mark Hannington of the prestigious Helmholtz Centre for Ocean Research told the OECD, sea floor mining will inevitably cause environmental damage, and no one knows how to minimize it.

Even the most careful deep-sea mining will disturb the marine environment. The generally held view is that industrial-scale mining will inflict a range of harm that will irreversibly alter the deep oceans, but as yet there is no clear picture of what those impacts might be….

It is difficult to know what regulatory regime should be put in place to address environmental impacts in areas that have never been mapped or even visited to protect them against harm that is still largely unknown and might not happen for decades to come.17

A recent article in the journal Nature is more blunt:

The scarce data that exist suggest that deep-sea mining will have devastating, and potentially irreversible, impacts on marine life.18

The danger of allowing profit-hungry corporations to dig for minerals and drill for oil in the deep ocean was shown clearly in 2010, when the world’s deepest oil well exploded, killing 11 workers and releasing 4.9 billion gallons of oil into the Gulf of Mexico. As the Obama-appointed commission into the Deepwater Horizon disaster concluded, the actions of BP, Halliburton, and Transocean,

reveal such systematic failures in risk management that they place in doubt the safety culture of the entire industry.19

If past experience with mining and fossil fuel companies is anything to go by, no one should trust their pious promises of environmentally responsible behavior in deep water.

It is impossible to overstate the importance of the oceans to Earth’s life support systems. Ocean-based organisms produce more than half of the oxygen we breathe-far more than tropical forests. Almost all of the rain that makes plant life possible originates in the oceans, which contain 97% of the planet’s water. They help stabilize the climate by absorbing 50 times more carbon dioxide than the atmosphere, and by transporting warm water away from the tropics. They are the primary source of protein for a billion people, and an important source for three billion more. The great biogeochemical cycles at the heart of Earth’s global metabolism depend on healthy oceans.

A rational society, conscious of those facts, would carefully manage its relationship with the oceans, always applying the precautionary principle and giving top priority to the protection and regeneration of essential ecosystems.

But we don’t live in a rational society. As Michael Parenti writes, capitalism has very different priorities.

The essence of capitalism, its raison d’etre, is to convert nature into commodities and commodities into capital, transforming the living earth into inanimate wealth. This capital accumulation process wreaks havoc upon the global ecological system. It treats the planet’s life-sustaining resources (arable land, groundwater, wetlands, forests, fisheries, ocean beds, rivers, air quality) as dispensable ingredients of limitless supply, to be consumed or toxified at will.20

That is precisely what the blue acceleration represents: a drive to accumulate capital by enclosing, exploiting and commoditizing the oceans. For seventy years, Earth has been accelerating out of the Holocene into the Anthropocene, where environmental disasters loom. Now capitalism’s hell-bound train is speeding up, fueled by accelerating ocean development.

The case for ridding the world of this deadly system has never been stronger.