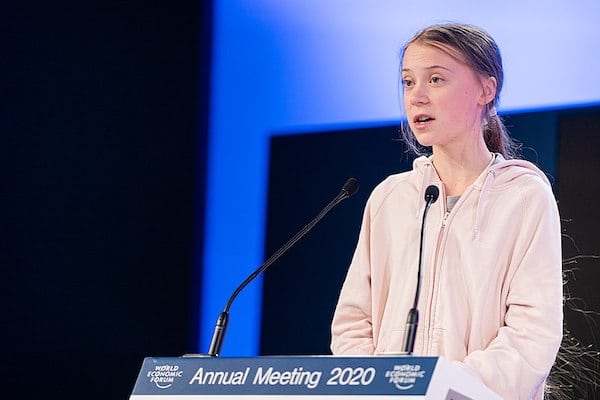 Last month at the gathering of the great but not good, the rich and infamous, at The World Economic Forum in Davos, U.S. Treasury secretary, Steven Mnuchin, formerly a hedge fund manager, was asked whether he agreed that calls by teenage climate activist Greta Thunberg for public and private-sector divestment from fossil fuel companies would threaten U.S. growth.  He said it would and Mnuchin jibed: “Is she the chief economist? Who is she, I’m confused… After she goes and studies economics in college she can come back and explain that to us.”   Thunberg retorted:

My gap year ends in August, but it doesn’t take a college degree in economics to realise that our remaining 1,5° carbon budget and ongoing fossil fuel subsidies and investments don’t add up.

Thunberg may not be an economist (which may be to her advantage), but the economics of global warming and climate change is concentrating the minds of many economists, if not Mnuchin.  JP Morgan economists recently considered the issue of the “financial stability and economic risks from fossil fuel stranded assets: oil, coal and gas reserves that cannot be exploited due to the transition to a low-carbon economy.”  They reckon that up to US$20tn could be wiped from stock market values if it is realised by investors that reducing fossil fuel use would mean a sizeable portion of proved reserves held by energy companies may never be used. These ‘transition risks’ to the profits of the energy companies would be equivalent to 17% of the US$119tn global fixed income and equity markets.

So JP Morgan economists tried to work out what could be the minimum reduction in fossil fuel use to avoid losses for the energy companies and financial markets. The lower the target limit on greenhouse gas emissions, the greater the risk of ‘stranded assets’ (unused) on the books of the companies.  The size of stranded assets would depend of the temperature target, which in turn would depend on government policy decisions and on technology innovations to reduce energy use and carbon emissions over the next generation.

The International Energy Agency (IEA) has a ‘Sustainable Development Scenario’ which it claims to limit the global warming increase to 1.8⁰C relative to pre-industrial times, with a 66% likelihood.  In this scenario, energy-related CO2 emissions are assumed to peak immediately (yes, right now!) and then fall to reach zero in 2070.  If that actually happened, then, according to JPM, 87% of the current proved coal reserves, 42% of current proved oil reserves and 26% of current proved natural gas reserves would need to be left in the ground if the temperature gain were to be limited to 1.8⁰C.

The difference between the temperature increases in the Sustainable Development Scenario (around 1.8⁰C), the Stated Policies Scenario (around 3⁰C) and the Current Policies Scenario (around 3.5⁰C) may not seem very large.  But they are for the world economy, human society and ecosystems.  Climate change is about much more than an increase in the temperature. It is also about the frequency and intensity of extreme weather events (such as heatwaves, droughts, flooding, storms, and tropical cyclones), shifts in atmospheric and oceanic circulations, declines in ice cover and sea level increases.

JPM economists pin their hopes on squaring the circle through the development of carbon capture and storage (CCS) technology, which aims either to prevent CO2 emissions from energy production and industrial processes that use fossil fuels from entering the atmosphere or to remove CO2 from the atmosphere completely (see graph above). The CO2 captured would then need to be stored underground. The more effective the CCS technology, the less pressure on stranded assets; and the less the loss of profits for energy companies.

At the moment, there are three technologies in theory that could do this. First, carbon capture and storage (CCS), where the emissions from power plants and industrial processes are captured before they enter the atmosphere. Second, biomass energy carbon capture and storage (BECCS) where energy is produced by plant material (which has absorbed CO2 while growing) and the emissions are captured before they enter the atmosphere. This generates negative emissions. And third, direct air capture and carbon storage (DACCS) where CO2 is extracted from the atmosphere directly. This also creates negative emissions.

In reality, these technologies are not going to do the job.  Currently, there are 19 operational CCS facilities, with 32 under construction or development. These facilities have the capacity to capture around 40Mt of CO2 per year. This is just 0.1% of the current energy-related CO2 emissions of around 33Gtper year.

Then there is the Nightmare Scenario.  Some recent scientific projections suggest that a ‘business-as-usual climate policy scenario,’ as promoted by the likes of Mnuchin, is expected to deliver a temperature increase of around 3.5⁰C; dangerous enough.  But the impact of climate change is likely to come just as much from an increase in the variance as from an increase in the mean.  Up to now scientists concur that the Earth could warm 3°C if CO2 doubles. But the latest models suggest even faster warming — recent model projections on global warming from various sources are suggesting a rise in global temperature in excess of 5°C.

Indeed, a Pareto probability distribution function of the current projections have ‘fat tails’ that suggest there is a 1% likelihood of a 12⁰C increase in temperature. Weitzman:

the most striking feature of the economics of climate change is that its extreme downside is non-negligible. Deep structural uncertainty about the unknown unknowns of what might go very wrong is coupled with essentially unlimited downside liability on possible planetary damages.

With that kind of temperature increase, human life would probably not survive. But even worse, says JPM economists,

in such a catastrophic outcome, all financial and real assets would likely be worthless!

And yet governments continue to allow energy companies to search for and develop more fossil fuel resources.  And this is not just in so-called emerging economies which need growth.  Canada’s Liberal government claims to be a leader in fighting global warming.  But the government has still agreed to allow the development of the biggest tar sands mine yet: 113 square miles of petroleum mining. A federal panel approved the mine despite conceding that it would likely be harmful to the environment and to the land culture of indigenous people.

These giant tar sands mines (easily visible on Google Earth) are already among the biggest scars humans have ever carved on the planet’s surface. But Canadian authorities ruled that the mine was nonetheless in the “public interest”. Justin Trudeau, recently re-elected as Canada’s prime minister, put it in a speech to cheering Texas oilmen a couple of years ago: “No country would find 173 billion barrels of oil in the ground and leave them there.” So Canada, which is 0.5% of the planet’s population, plans to use up nearly a third of the planet’s remaining carbon budget.  There’s oil in the ground and it must come out.