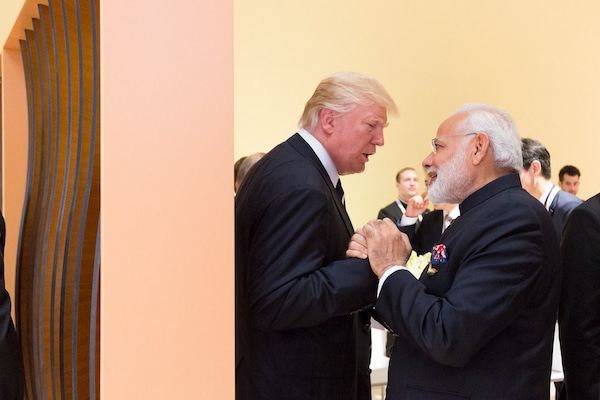 One thing about U.S. President Donald Trump is that he can be brutally frank. Trump recently picked up the phone and called British Prime Minister Boris Johnson to convey his displeasure over the latter’s decision to allow Huawei to operate in the United Kingdom despite Washington’s repeated urgings not to do business with the Chinese tech company.

Washington even threatened that London would be expelled from the Five Eyes (intelligence-sharing arrangement between the U.S., Canada, the UK, Australia, and New Zealand) if it had anything to do with 5G developed by the Chinese company.

But Johnson stuck to his guns—rightly so, since the post-Brexit British economy hopes to get substantial blood transfusion from China to sustain its future growth and prosperity.

After a “furious” call from Trump, which ended abruptly when the U.S. president “slammed down the phone,” Johnson has since postponed his planned visit next month to Washington.

Therefore, Trump’s frank remarks about his forthcoming India visit on February 24-25 to Ahmedabad, Gujarat, should not come as a surprise. In response to a query from the media, he said on February 18:

There is virtual certainty now that Trump won’t cancel the visit, as he’s wont to doing at the last minute if his attention wanders away to something more exciting.

Prime Minister Modi did a smart thing indeed by enticing Trump with the alluring prospect of 7 million people lining up the streets from the Ahmedabad airport to the newly built Motera Stadium in the city.

What can be more seductive to lure a populist politician than a mass rally? Modi understands Trump well like few people can.

Trump treats politics like a reality show. He is the very antithesis of a cerebral, erudite politician. Ideas don’t matter; words and showmanship are all that matter to him.

Trump derides intellectuality, has a flair for fake news, speaks untruths freely (even in his State of the Union speech), and is a living example of what Abraham Lincoln once said, “Nearly all men can stand adversity, but if you want to test a man’s character, give him power.”

But how come such a hugely successful businessman like Trump can be so naive as to believe that Modi will produce a human chain of 7 million Gujaratis?

Some Indian analysts estimate that something like 300,000 Gujaratis might actually line up to witness the nearly 14-mile-long Trump-Modi roadshow on February 24 from the airport to Motera Stadium.

Trump would have calculated that even if just about 10 percent of the people Modi promised actually show up for the roadshow, that would present a breathtaking image to be broadcast back to American TVs.

The overpowering impression that the spectacle would create in the American public will be that Trump is an immensely popular leader among mankind, contrary to how half of Americans speak of him.

To be sure, the Modi government is leaving no stone unturned. The government hopes to arrange 120,000 people to attend the rally at Motera Stadium. Three thousand buses will be deployed to ferry people from the districts to the stadium.

The state government is expected to spend nearly US$15 million on road renovation, security cover, cultural shows, decorations, etc., alone to give a fresh look to the Gujarat model of development.

Trump didn’t waffle on the reason why he is coming. He hinted that a trade deal remains elusive. His remarks also belied some annoyance with Delhi—presumably, for not being more helpful for his America First project or his family’s business interests in India.

But then, he happens to like Modi himself “a lot.” Suffice it to say, this visit needs to be seen as a favor he’s doing for Modi, whose invitation once as chief guest on Republic Day he’d turned down.

Trump sounded like the badshah (king) out to enjoy himself on an exciting hunting trip and is looking forward to much self-gratification, all arranged at no personal cost to himself.

What can the lowly subjects expect in return? In ancient times, the badshah would have thrown gold coins at the poor people lining the streets.