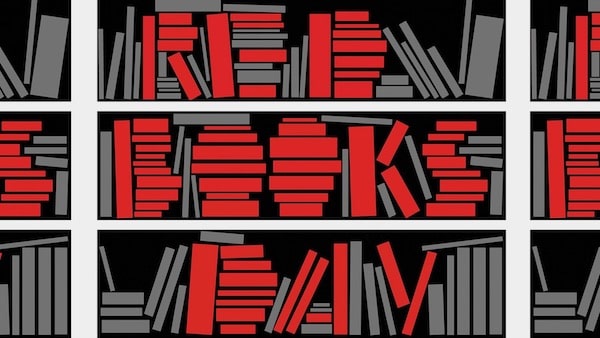 Across the continents on February 21, tens of thousands participated in public readings of the Communist Manifesto, organized to commemorate the 172nd anniversary of its first publication in 1848, under the title The Manifesto of the Communist Party.

The idea of hosting such a reading was jointly conceived by Leftword Books–a New Delhi-based marxist publishing house–and the International People’s Assembly, which was formed last year with delegates representing left-wing political parties, trade unions and social movements from 85 countries around the world.

“We are now witnessing the rise of a neo-fascist menace. This menace has turned its attention to left books,” started the official statement on RedBooks.org, explaining the purpose of hosting such an event. Many left bookshops have been attacked. Leftist writers around the world have received threats, many of whom have been assassinated.

These attacks, however, have done little to suppress left literature and its readership. “There has been an upsurge of support for these bookshops as well as for the writers and publishers. A sense of outrage has built up, that shows confidence among our readers and comrades to confront the neo-fascists and stand up for left books,” the statement explained.

In this context, public reading of the Communist Manifesto was not only a reassertion of the continuing relevance of this document which sparked revolutions in the 20th century that have changed the world, but also an act of defiance in the face of the far-right which has been trying to terrorize the left globally.

It is high time that Communists should openly, in the face of the whole world, publish their views, their aims, their tendencies, and meet this nursery tale of the Spectre of Communism with a manifesto of the party itself.

In the spirit of this statement, various left groups–small and large–ranging from political parties to study circles in Asia, Africa, South America and North America organized the loud and public readings of this document, in coordination with the International Peoples’ Assembly and Leftword Books.

At Leftword’s bookstore at May Day cafe in India’s capital city, New Delhi, the manifesto was read at the Red Books Day event in multiple languages, in a celebration and acknowledgement of the wide reach of this document.

The manifesto spreads the spectre across India

Soon after the formation of the Communist Party of India (CPI) in Tashkent in 1920, Marxist literature was smuggled into the country then colonized by the British. Between August of 1926 and July of 1927, the manifesto, translated into Bengali, appeared in series in six separate issues of Ganavani (Voice of the People). 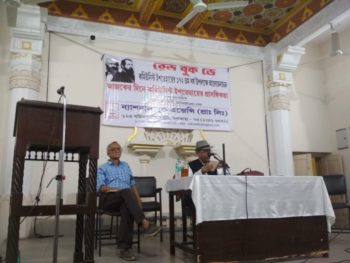 In Calcutta, the capital city of Bengal state, National Book Agency, India’s oldest left publisher, organized a reading followed by a lecture on the Manifesto by Gautam Deb, a Central Committee member of the CPI(M).

The weekly was a mouthpiece of the Workers and Peasants Party, which was one of the organizations in which members of the then banned CPI operated. But the importance of this document was not felt only by the communists.

In November that year, the manifesto had appeared in parts in the weekly Urdu publication, Al-Hilal. “However, unlike Ganavani which was a left-wing paper, Al-Hilal was founded and edited by Maulana Abdul Kalam Azad, Islamic scholar and one of the foremost leaders of the Congress-led nationalist movement,” states a chapter from the World to Win: Essays on the Communist Manifesto, a Leftwords book edited by the Prakash Karat, politburo member and former General Secretary of the Communist Party of India (Marxist).

While in jail after being implicated in the Meerut Communist Conspiracy case, the undivided CPI’s member Gangadhar Adhikari translated the manifesto into Marathi between 1930-1931. It was published in October that year.

The same month, the manifesto also began to appear in a series in Tamil, the language of the southernmost state at the tip of Indian peninsula. The publisher was E.V. Ramaswamy, known popularly as a Periyar, a radical anti-caste activist who pointed out in the introduction that because of the existence of a hereditary caste system in the country, in addition to class exploitation, “Communism faces double opposition here”.

In Nepal, Balaram Baskota, a member of parliament from the Nepal Communist Party, publicly read the manifesto near Tribhuvan University in the capital city, Kathmandu. In 1930, the first Marxist literature was  smuggled into Nepal. Dasharath Chand and Gangalal Shrestha–two of the most revered martyrs in Nepal who laid down their lives in 1941 in the struggle against the oppressive and autocratic rule of Rana dynasty in the then Kingdom of Nepal–were known to be avid readers of  Marxist literature.

In the the city of Lahore, the economic hub of Pakistan, a reading session was organized in the office of Naked Punch, a magazine and a collective of artists and thinkers. Participants read the manifesto in Sindhi, Punjabi and Urdu.

In South Korea, comrades organized a creative reading of the Communist Manifesto.

Revolutionary potential: “not in Marx’s time, not in Lenin’s time, but in ours”

Outside of Asia, readings to celebrate the Red Books Day were also organized in the African continent. In South Africa’s largest city of Johannesburg, members of Tricontinental: Institute for Social Research, organized the event in The Commune, a collectively run radical bookstore. Playwright, stage director and acclaimed performer, Napo Masheane, performed a dramatic reading of Communist Manifesto in Sesotho and English language.

In Latin America, people across the continent organized readings. In Brazil, members of the Landless Rural Workers’ Movement (MST) participated in readings in schools of political education, on land occupations, and in the capital Sao Paulo in the store and cultural space, Armazem do Campo, which sells and distributes products made by the MST. João Pedro Stedile, member of the National Board of the MST, spoke in a facebook live stream on the importance of the Manifesto today.

“This is the ultimate commie celebration”, announced Claudia De La Cruz, the opening speaker at the session.

Describing the manifesto as “an ideological orientation that has produced real life advances for the working class around the world”, she went on to talk about its current “context… when we see that there are larger attacks on socialist and communist practices and projects.”

“We are living and experiencing moments of crisis, where capitalism has its claws globally, strangling a lot of the economies that have dared to move in a different direction,” she said.

We see that with the attacks on Cuba, Venezuela, and what potentially be the next call to war with its attacks against China. So for us it is very important to be able to commemorate… the radical legacies.

Beyond a radical legacy from the past, the Communist Manifesto is a living document, which 172 years before, laid out the understanding that the laws of capitalist development destine the system to create a world proletariat, whose common interests will inherently clash with those of capitalists and bring down the system.

Marxist theorist and literary critic, Aijaz Ahmed, wrote in the essay The Communist Manifesto: In its Own Time, And in Ours:

Marx conceptualized the proletariat as a “universal class” at a time when no country in Asia or Africa could be considered as having something resembling a modern proletariat. In the larger American countries, like the U.S. and Brazil, there were more slaves than proletarians. Russia was steeped in serfdom; certainly the whole of Eastern and Southern Europe, and much of the rest as well, was predominantly agrarian.

His conception of the world proletariat was “a philosophical proposition”, based on the understanding that due to capital’s “inherent drive towards globalization… it was destined to constantly increase the number of proletarians around the globe so that, eventually, the proletariat will come to be comprised of the great majority of humanity, spread universally in all parts of the globe: a world proletariat”.

Ahmed points out that the size of the proletariat doubled between 1965 and 1995, and now numbers over 2.5 billion, about a 120 million who whom are unemployed. He argues that the revolutionary eventuality foreseen in the Communist Manifesto “has now come to pass, for the first time in history: not in Marx’s time, not in Lenin’s time, but in ours.”