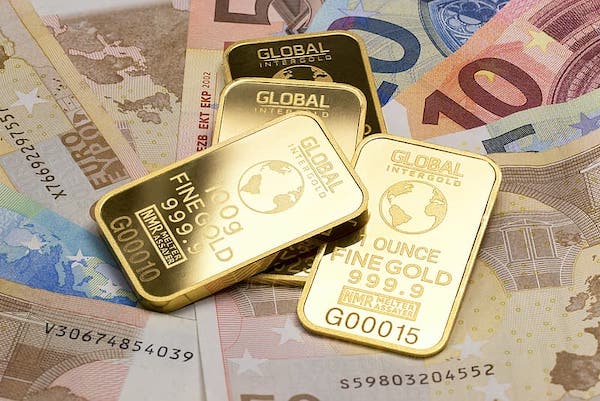 Discussions on the state of the world economy centre around the likely negative impact of the novel coronavirus epidemic and the potential positive effect of the truce reflected in the “phase 1” trade deal between China and India. Though most of the confirmed infections and deaths due to the virus have been confined to China (where the numbers at the time of writing exceeded 37,000 and 800 respectively), the role that country plays in driving global growth has increased concern that the adverse impact the epidemic will have on China’s economy will spill over globally. On the other hand, the trade deal between the U.S. and China, while partial and limited, is viewed favourably because of the positive signals that sends out with respect to growth in global trade.

While these assessments are valid, they divert attention from a more worrying aspect of global economic performance, which is the fact that the low rate of global growth that followed the Great Recession triggered by the Global Financial Crisis of 2008 is still a reality. The global economy has yet to be set on a path of robust recovery. Indifferent economic performance in the US, a persisting crisis in Europe and Japan and the slowing of growth in China and India have combined to cap global growth. In that sense, the crisis affecting the world economy predates the corona virus shock by a wide margin.

Consider the US. Though President Donald Trump chose to counter the gloom at the recent Davos meeting of the global elite, claiming that under his watch the U.S. economy has rebounded strongly, news emerged that in the last half of 2019 the U.S. economy had grown at just 2.1 per cent, as compared with a 3 per cent the White House targets. Over the full year 2019 growth is now placed at 2.3 per cent, significantly lower than the 2.9 per cent recorded in 2018 that had ignited hopes of a final escape from low growth.

As Chart 1 shows, if there were any signs of a recovery in the US, those were visible in the early years after the crisis when intervention by the Treasury and the Federal Reserve restored the financial system to solvency and provided a stimulus. But those signs soon gave way to a long period of slow growth which has become the “new normal”. It is now clear that in the years since the crisis what has really changed is not the performance of the economy, but the level of official ambition. Federal Reserve Chair Jay Powell, for example, justified not moving interest rates in a first review meeting in 2020, by stating the economy is “in a good place”. 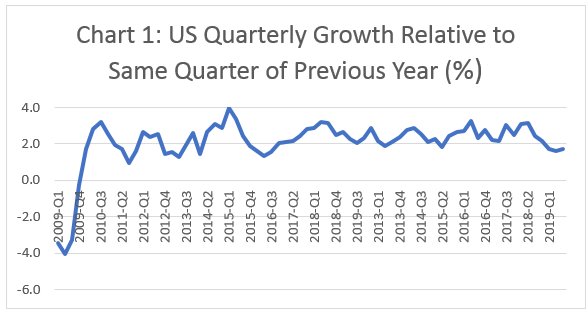 While the country that was expected to lead a global recovery is stuck in low growth, and possibly slipping, the scenario elsewhere is even worse. In the EU, the crisis intensified with a delay (Chart 2), taking the form of a sovereign debt crisis. With Germany too being hit by depressed global demand, growth has decelerated sharply in recent quarters. While there was some sign of a return to reasonable growth rates in the quarters beginning early 2014, this could not be sustained.

Finally, the performance of Japan, has been dismal. Quarterly growth rates were not just volatile but touched zero or negative levels in as many as 10 quarters (Chart 3).  These features of development in the core developed countries make clear that the locations where the financial crisis was most intense are yet to overcome the real economy crisis that the former triggered. 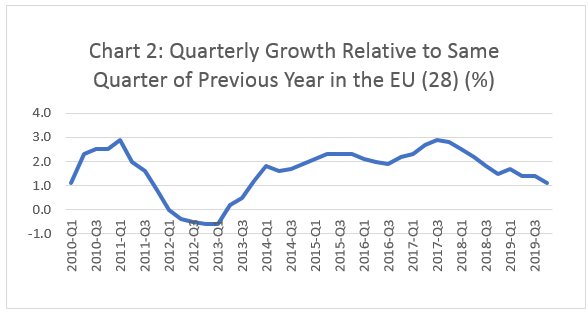 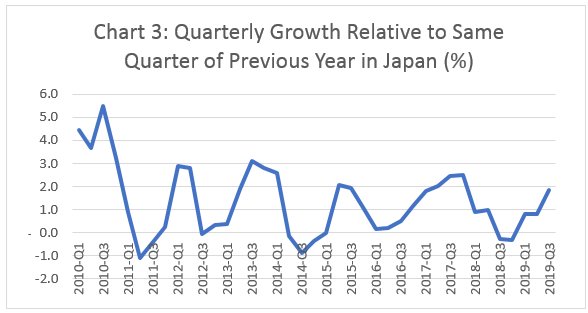 The impact of this on global growth has been compounded by the loss of momentum in China and India. The perception that these economies were decoupled from the rest of world and would compensate for poor or indifferent performance elsewhere, has turned out to be wrong. Growth in both economies has fallen significantly in recent quarters (Chart 4), resulting in a shift from moderate to low growth in the world economy. 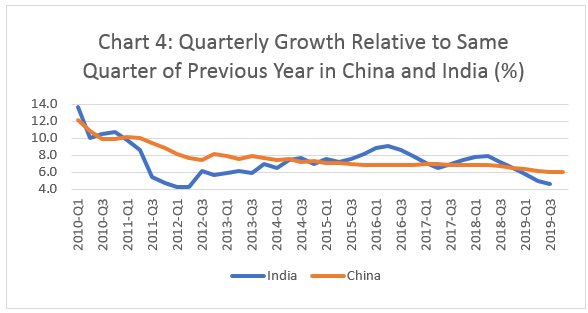 This generalised slowing of growth across the world economy is a matter for concern because developed country policy makers claim that they have been consistently working on reversing the slowdown and raising growth. Their efforts have, however, had a narrow focus. Except for a brief period as soon as the crisis broke, when governments ran deficits to stimulate the economy, reliance has solely been on monetary policy. Interest rates were reduced repeatedly and sharply, bringing them down to near zero and in some cases even negative levels. In addition, developed country central banks opted for “quantitative easing” or large and regular bond purchases that infused liquidity into the economy. The understanding underlying reliance on these options is that availability of easy and cheap credit would spur debt-financed investment and consumption and raise the rate of growth. The persistence of low growth indicates that this presumption has proved to be wrong.

One reason for this was that because of depressed demand conditions as well as high leverage resulting from the burden of accumulated debt the sensitivity of investment and consumption demand to increased access to cheap liquidity was low. In the absence of a fiscal stimulus that could have raised employment and incomes and helped accelerate the process of deleveraging, monetary instruments were largely ineffective in ensuring a robust recovery.

The single-minded emphasis on use of monetary policy instruments, resulting in huge and wieldy central bank balance sheets and the persistence of zero or negative interest rates for far too long has meant that the potential for the use of these instruments has been exhausted. The coronavirus shock and unresolved trade tensions now threaten to add to the troubles faced by the world’s policy makers. However, there are no signs as yet that they would revise their policy stance and use the fiscal lever, now that the reliance on monetary policy has run its course.

This article was originally published in the Business Line on February 11, 2020