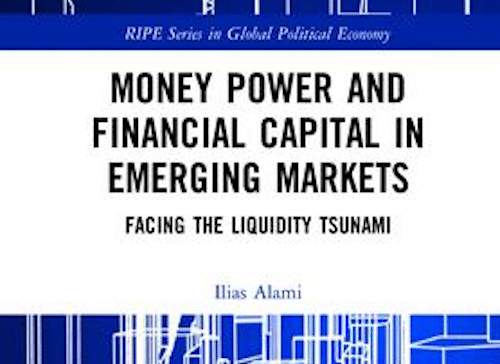 In April 2012, at the White House on her first visit to the United States since her election in 2010, Brazilian president Brazil Dilma Rousseff scolded advanced capitalist economies for unleashing a ‘tsunami de liquidez’, a ‘liquidity tsunami’, onto the developing world. The expression liquidity tsunami suggests that the sheer scale and volume of financial capital flows to developing and emerging markets had become an issue. It indicates that these quantities were overwhelming and could trigger devastating damages.

This in itself is puzzling. Have we not been told by development economists and practitioners that financial capital flowing into the poorer areas of the world economy is something good and desirable? That one of the main causes of underdevelopment is actually the lack of capital and domestic savings in developing countries, and that this should be compensated with foreign capital inflows? Following this line of reasoning, vast swathes of financial capital flowing into emerging markets surely should be seen as a boon.

And there was some truth to that. The capital flow bonanza from the mid-2000s to late 2013 (coupled with the primary commodity super-cycle) did deliver some benefits to emerging markets. It helped governments fund themselves at better conditions. It provided the material basis for significant redistribution via a number of social policies. It contributed to economic growth performances much higher than over the previous decade. It also made a minority of people much richer in a very short period of time. In sum, the capital flow boom temporarily helped deliver some economic and social gains, and this was instrumental in consolidating social contracts between governments and their populations.

Yet, as Gill Marcus, the South African Reserve Bank governor at the time, put it in a Financial Times op-ed: ‘One can have too much of a good thing’. The irony of this statement will not be lost to the reader: South Africa, Brazil, and many other emerging markets had made considerable efforts and deployed extremely costly policies for years in order to attract financial capital flows and build their reputation as attractive and profitable investment destinations. The very same countries were now complaining that they were receiving too much financial capital. As it turned out, the blessing of financial capital did not come without significant costs.

Given the sheer scale of the flows circa 2011, these costs were becoming increasingly problematic for governments in emerging markets. Not only were volatile cross-border financial capital movements a serious factor of macroeconomic instability and financial fragility, contributing for example to strong currency appreciation, the formation of asset bubbles, and the build-up of various forms of external vulnerability, they also constituted a major mechanism through which financial crises which originated elsewhere in the world economy (for instance, in the Eurozone) were transmitted to emerging markets.

It became clear that economic development in the latter was increasingly dependent and subordinated to global liquidity conditions and market sentiment. Furthermore, the end of the financial capital flow boom post-2013 played a decisive role in the profound political crises that unfolded recently in many emerging markets, by worsening economic conditions and prompting state authorities to implement deflationary adjustment policies, at huge social and human costs. In other words, from a scenario where financial capital inflows were experienced as too much, there was then an extremely fast and brutal transition to a configuration where they were experienced as too little, and this was equally, if not more, harmful to emerging markets. This temporal sequence tells us that whether it is experienced as too much or too little in emerging markets, the movement of financial capital across the world market has the capacity to powerfully determine the prospects of entire regions and the fate of their populations.

My new book proposes to scrutinise how this forceful form of social regulation subjects emerging markets to the discipline and logic of capital, that is, to the money-power of capital. In particular, it is concerned with how this ‘seemingly transcendental power’, to borrow an expression from Marx, as expressed through the cross-border movement of money and financial capital, encapsulates a messy entanglement of opportunities and constraints which present states in emerging markets with a series of challenges which are particularly difficult to manage.

The book addresses this issue by foregrounding class relations as a fundamental analytical category. This is important because it allows uncovering the multiple class-based relations of domination and exploitation that underpin both the movement of cross-border finance and the various institutional and political forms of state power in emerging markets that mediate this movement. Put differently, a focus on class allows conceiving of the social relations of capitalist production and the limits set by the dynamic process of capital valorisation as crucial determinants of cross-border financial policy processes and outcomes.

The book also argues that differentiation in cross-border financial management is a process shaped by the specific position of emerging markets in global financial and monetary relations, and the implications of this position in terms of the global distribution of financial gains, risks, and vulnerability. This is because emerging markets occupy a subordinate positionality in the geographical organisation of financial and monetary relations on a planetary scale, or what the book calls the relational geographies of money-power. The book constitutes one of the first attempts to systematically characterise the subordinate positionality of emerging markets in these geographies from a multi-disciplinary perspective, combining insights from Marxist political economy, post-Keynesian economics, economic geography, and postcolonial and feminist IPE.

While my approach is resolutely grounded in geographical political economy, I also draw upon each of these perspectives in order to scrutinise various aspects of the network of space and power relations that characterises contemporary global finance. These include: the geographical organisation of the circuits of financial capital (the financial system), the functional/spatial configuration of convertibility between different currencies (the global monetary system), the concentration of money-power in a limited number of world financial centres and institutions, and the gendered and racialised imaginaries involved in the construction of emerging markets as an asset class.

The book shows that patterns of cross-border finance in emerging markets are considerably shaped by these geographical features, with far-reaching implications for state policy-making, the dynamics of capital accumulation, and for prospects of progressive social change in these countries. As such, the book contributes to an emerging research agenda concerned with uncovering the global relations of power, value, and exploitation which underpin the subordinate financial integration of developing and emerging economies into the world market, and how this contributes to the reproduction of inequalities on a global scale. It makes an original contribution addressing this question from a perspective centred on the classed, raced, and gendered geographies of money-power.

The book investigates these issues from both a theoretical lens and an empirical one, by focussing on two case studies, Brazil and South Africa, where I conducted extensive fieldwork research and more than 85 semi-structured interviews with state managers in various government ministries and central banks, financial regulators, financial journalists, trade unionists, academics, activists, as well as economists at business organisations. It will be especially useful to those researching and working in the areas of international political economy, contemporary geographies of money and finance, and critical development studies. It should also prove of interest to policy makers, practitioners, and activists concerned with the relation between finance and development in emerging markets and beyond.

Ilias Alami is a postdoctoral researcher at Maastricht University. Prior to joining Maastricht University, he taught international political economy, globalisation and development at the University of Manchester, UK. His research and teaching interests are in the areas of the political economy of money and finance, development and international capital flows, the geographies of global finance, materialist state theory, and race/class/coloniality. Some of his recent work has been published in New Political Economy, Review of African Political Economy, Review of Radical Political Economics, and Geoforum.