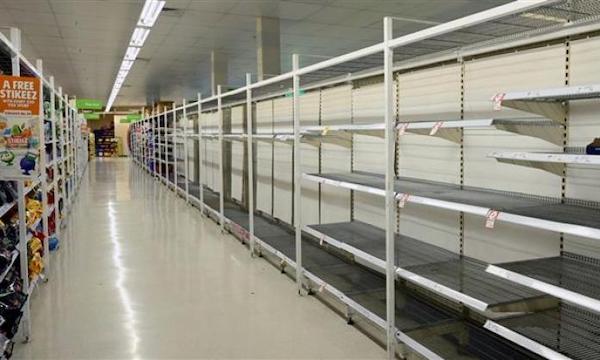 Why are we still exchanging goods on the market?

Testing kits are one of the most basic tools needed in the fight against the spread of COVID-19. Yet even the wealthiest countries are struggling to produce the bare minimum needed to equip front line medical staff with the means to limit the spread of the virus.

Even as governments shift to fast track the production of medical supplies and protective gear, they are struggling with the fact that the world economy is simply not structured to accommodate such a task.

Chemical reagents, which are an essential part of the testing kits, are running low in many countries. The market for reagents is dominated by a Dutch company, recently purchased by U.S. giant Thermo Fisher Scientific, and Swiss-based Roche laboratories. Like most corporations, this duopoly has structured their businesses around “just in time” production–producing only enough goods that can be sold on the market immediately. Of course, this rules out building up a stockpile of medical goods in preparation for a future crisis.

For our capitalist market economy, Apple CEO Tim Cook’s maxim that inventory is “fundamentally evil” is a guiding principle. This is why, two months into the COVID-19 crisis, the Australian government has asked universities to hunt around in classroom laboratories for unused medical equipment. After all, why would companies produce hundreds of thousands of extra testing kits just to have them piled up in a warehouse? Such a strategy would only make sense if you were preparing for, say a, widely predicted, future pandemic.

It’s not just the immediate need for medical supplies that is unfulfilled by the market. The economic crisis caused by the coronavirus has thrown up all sorts of challenges that capitalist society is in a shocking state to deal with.

We have all been told to stay indoors as much as possible to stop the spread of the virus. But what about the masses of homeless people across the world? Even in relatively wealthy countries such as Australia this is a huge problem. The last census revealed that there are more than 116,000 homeless people. And it’s not just the homeless–there has been an increase in the number of people living in overcrowded dwellings. The same census also showed that there were more than 1 million empty houses.

The solution is staring everyone in the face. Yet the rules of market exchange get in the way of a sensible plan–put homeless people in empty dwellings. The best some state governments can come up with is to pay for hotel rooms for temporary use. Why not just take over some of these empty properties? Surely that would be better than putting people into crowded hotels and them dumping them on the streets again later.

At every stage, access to food and basic household supplies butts up against the same problem. The impact of the coronavirus has thrown up huge problems for the production and transportation of food. The UN is warning that a global food shortage is becoming a possibility. These challenges are exacerbated by the highly competitive and profit driven nature of the world food market. As crazy as it sounds, food is not produced primarily to feed people, it is produced because it can be sold on the market. Every step in the food industry–from the farm to the world market–is structured around this principle.

In fact, for all the talk about the adaptability of the market and the law of supply and demand, massive multinational corporations have constructed a rigid food production system that struggles to change. This is because it is not the product of democratic planning but the outcome of anarchic power struggles between global companies.

The companies don’t work out what food different areas should produce so we have a holistic accumulation of resources. They calculate what they can sell immediately for as high a price as possible. They then build supply chains and transportation systems narrowly around their own production needs, creating a sprawling and complex logistical nightmare of opposing interest groups, with overproduction in some areas and underproduction in others. The system struggles at the best of times; when crisis hits, it threatens to collapse.

In terms of distributing goods, here in Australia again we have the problem of a duopoly (Coles and Woolworths) storing just enough supplies that they can sell in regular times and totally unprepared for any kind of crisis. Then we have the glaring contradiction of being told not to be in groups of more than two people but also having to scramble around in crowds of hundreds at supermarkets. This is because we have to buy all our goods on the market from massive corporations.

Why can’t we have a planned system, in which food and other household goods are safely transported to people’s houses? Or to local drop-off points with different people coming to collect at times? The only reason not to do this is because a company wouldn’t be able to turn a buck as easily out of it.

At every turn, any serious response to the spread of COVID-19 comes up against the limitations of a world economy built around the private exchange of goods on the market. Even now, when governments are intervening into the market to produce what is necessary to fight COVID-19, they do so with one hand tied–and the other scratching the back of big business. So government after government is spending millions of dollars bailing out the airline industry, even though the airlines have spent decades using a lot of their considerable profits to buy their own shares and enrich their management teams.

Production for sale on the market rather than production for human need is a fundamental feature of capitalist society. It easily coexists with a bureaucratic state dominated by the interests of big business. We need a different kind of society, one organised around the production of the essentials of life for the benefit of all.