This documentary short film captures the meaning and importance of Mauna Kea to the native Hawaiian people and why they stand to protect this sacred land.

Filmed and Edited by Vance Uribe (vanceuribeimage.com) All filming was done with permission and respect. Special thank you to Kanaka Ranger Cody-Fay and all of the Kia’i who stand every day protecting their ancient beliefs.

Amid the ongoing spread of the new coronavirus and the respiratory disease it causes, called COVID-19, native Hawaiians who oppose construction of the Thirty Meter Telescope (TMT) atop the dormant Maunakea volcano have reduced their presence on the Hawaiian mountainside.

On March 14, the Pu’uhonua o Pu’uhuluhulu community encamped on the mountain published a statement on their website and via Twitter asking kupuna (elders) and “those with a higher risk of respiratory illness” to stay home and off the mountain. The group, who refer to themselves as kia’i, or guardians, also asked visitors and supporters to refrain from visiting Maunakea until the pandemic has passed its critical stage, according to the statement. (As of yesterday, April 1, Hawaii has reported a total of 258 confirmed or presumed cases of COVID-19.) In addition to taking generally recommended precautions, the kia’i said they are concerned that tourists visiting Hawaii from elsewhere put their elderly community at increased risk.

Although the elders were asked to retreat for their safety against COVID-19, there is still a kia’i presence on the mountain, kupuna and kia’i spokesperson Noe Noe Wong-Wilson told Space.com. “We’re still here,” she said, adding that this type of reduction in their active presence does not mean the movement halts, too.

Since mid-July of 2019, protesters have gathered to block the access road to Maunakea’s summit so that TMT construction material cannot reach the telescope site. A group of protesters remained there until recently, according to a kia’i spokesperson, although a Mar. 26 report from the Honolulu Star-Advertiser states that protesters have now pulled back from the camp.

The situation was calmer this year than it was in 2019: A standstill between protesters and state officials has been in effect since December 2019; Hawaii County Mayor Henry Kim recently asked for an extension of this truce. This agreement stipulates that no protesters would be arrested and that TMT would not send construction material up the mountain. The COVID-19 pandemic is likely to keep the situation in limbo. 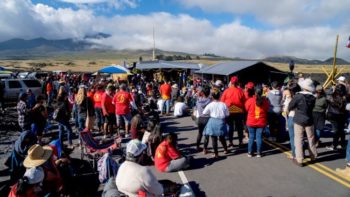 In addition to the kia’i, other entities on Maunakea have responded to the COVID-19 outbreak. Existing observatories on Maunakea have restricted work-related travel. A March 13 statement from Maunakea Observatories said they were “adhering to federal restrictions on incoming visitors, and taking greater precautions where possible and deemed necessary.” And according to a statement published March 18 by the University of Hawaii, which plays a stewardship role over Maunakea’s summit, the university shifted to online classes on March 23, after spring break.

TMT is part of “a new class of extremely large telescopes,” telescope officials said on the project website. The massive size of the structure includes a 30-meter (nearly 100-foot) diameter mirror that “will be three times as wide, with nine times more area, than the largest existing visible-light telescope in the world,” TMT officials also said. Proponents of TMT argue the telescope could observe cosmic objects with greater sensitivity, allowing researchers to view the universe in higher resolution and for use across many disciplines within astronomy like the study of exoplanets, stellar physics and cosmology.

The kia’i say that especially because of the massive size of the facility, the project would further desecrate the summit. The mountain has religious significance for native Hawaiians and already houses 12 observatories on the summit.

The value of Maunakea

Reports about the standoff often link the conversation around TMT to the sociopolitical history of native Hawaiians with the state government and the U.S. But for Wong-Wilson, that focus often masks the singular objective of the kia’i.

“We don’t sit on the road because our queen was overthrown in 1893; those are facts of history and there was an apology bill in 1993 signed by President Clinton which calls for reconciliation. That is a whole different topic,” Wong-Wilson said, adding that reconciliation for past wrongs can be worked over indoors or from home.

A volcanic peak, Maunakea is where the creation of life occurred in the religion of native Hawaiians, and as Wong-Wilson put it, Maunakea is part of the “belief in how we came to be as Hawaiians.” As the tallest mountain in the world measured from base to peak, Maunakea is thought of as the place where the Earth and the sky meet in their religion, “and from that union,” she said, 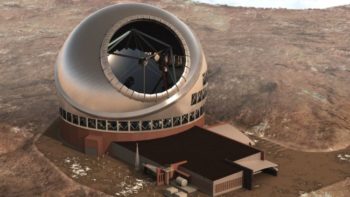 Maunakea’s elevation of 13,803 feet (4,207 meters) also makes the summit a desirable location for astronomical observatories, since the height reduces the amount of atmospheric blurring telescopes experience.

Maunakea Observatories and TMT have published on their website how the $1.4 billion project, which is backed by six countries and several universities, will offset its presence in several ways. (According to a developing story published by the Honolulu Star-Advertiser on March 17 and a Space.com request for comment from a TMT representative, the latest project estimate is in the range of $2.4 billion).

The organizations emphasized that the observatory will use “a special reflective aluminum-like coating” to reduce the visibility of the structure and that the facility will “not prevent traditional and customary native Hawaiian practices.” TMT proponents have also emphasized that, while the telescope would sit in the region that is generally thought of as Maunakea’s summit, it would be 0.3 miles (500 meters) below the mountain’s highest point. TMT also cites polls that show public support among Hawaii residents for the project.

Wong-Wilson and other protesters are unhappy that TMT would mean more excavation and disturbance to the top of the mountain. 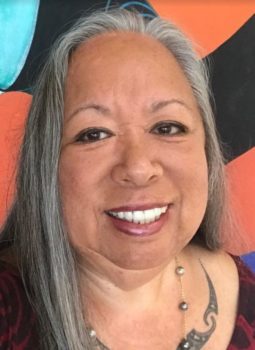 “I know astronomers love their science and they believe that they do it for all the right reasons,” Wong-Wilson said.

We’re not against the science of astronomy. We are against the building of a building too big on our sacred mountain. And we really want to make that clear, because that gets lost.

Wong-Wilson said she attended the American Astronomical Society (AAS) meeting in Honolulu in January and met with a number of astronomers. She said that she was hopeful after speaking with young members of the astronomy community who, she said, appeared to be

much more conscious of the profession [and] the impact of astronomy facilities on the community.

Gordon Squires, TMT vice president for external relations, told Space.com in an email that “at this time, we don’t have a timeframe for beginning construction,” adding that the TMT project continues to engage in private discussions with community members to resolve the matter. In addition to contributing scientific knowledge, Squires wrote that the project could strengthen Hawaii’s economy, especially in light of the dramatic drop in revenue the state’s tourism sector faces this year as the coronavirus prompts travel restrictions.

In late December, the two sides agreed to a two-month truce during which the consortium behind TMT would not attempt to start construction and the protest-camp residents would not block access up and down Maunakea.

At the AAS meeting in Honolulu, a group of native Hawaiian researchers announced the submission of eight white papers about the debate’s social context to Astro2020, or the Decadal Survey on Astronomy and Astrophysics, according to a Jan. 14 article by Science Magazine. The decadal survey is a 10-year plan outlining scientific missions and goals created by the U.S. National Academies of Sciences based on community input. 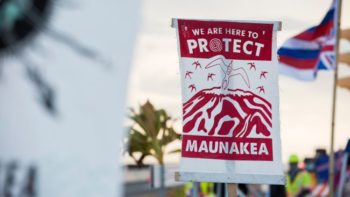 A protester displays a banner about protecting Maunakea from the Thirty Meter Telescope in August 2019. (Image credit: Matt Gush/Shutterstock)

The AAS meeting also saw both anti- and pro-TMT demonstrations; protesters gathered at an opening ceremony for the Hawaii Legislature later that month.

Kim, the Hawaii County mayor, has asked TMT to delay construction beyond the end of the two-month standoff, according to a Feb. 18 report from the Hawaii Tribune-Herald. Kim and other legislative leaders have come under criticism for avoiding responsibility for the impasse, according to a Feb. 10 article in the Honolulu Civil Beat. On Feb. 23, the Hawaii Tribune-Herald reported that certain TMT-related items on the state’s draft operating budget and several bills involving development on Maunakea have

failed to gain traction in the state legislature and have either died or been redacted.

The Honolulu Civil Beat also reported on March 4 that Japan, one of the partner nations on TMT, suspended its yearly funding for the project because of the ongoing standstill. According to their report, Japan is still committed to the idea of Hawaii as the preferred site for TMT over an alternative location in Spain’s Canary Islands.

“The government of Japan reduced its budget allocation for the TMT project in Japanese FY2020 (April 2020 to March 2021) due to the stalemate of the construction in Hawaii,” Tomonori Usuda, Thirty Meter Telescope Japan project manager, said on behalf of the National Astronomical Observatory of Japan (NAOJ) in a statement that TMT forwarded to Space.com.

We need to slow down the development activities in Japan for the fiscal year. However, this slowdown will not impact the overall schedule of the project significantly because Japan has steadily developed its contributions (primary mirror segments and final design of the telescope structure) so far.

The situation between TMT and the kia’i remains unresolved for now. Although the kia’i have ”put their active presence on pause,” Wong-Wilson says they will continue their attempt to halt the project in other ways and that the protest continues.