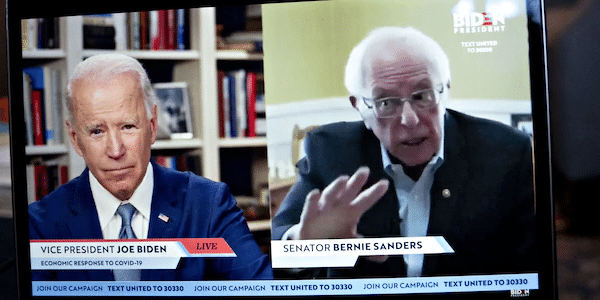 Blaming health risks due to the Covid-19 pandemic, the New York State Board of Elections announced last week that the state would simply cancel its Democratic presidential primary, leaving former Vice President Joe Biden to be proclaimed the victor without a vote. The response from the country’s two most prominent newspapers? Meh. 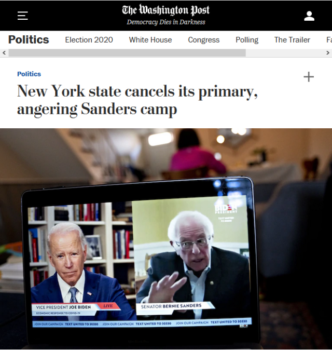 The Washington Post (4/27/20) frames the cancellation of democratic elections for New York State’s leading party as a matter of concern for the “Sanders camp.”

Under the headline “New York State Cancels Its Primary, Angering Sanders Camp,” the Washington Post‘s Sean Sullivan (4/27/20) framed the story as simply a battle between the Sanders campaign (and its allies) and state election officials, offering back-and-forth quotes from both sides. Sullivan did include one quote from an outside expert—but only to dismiss a Sanders adviser’s suggestion that the move offered a “precedent” to Trump to “use the current crisis as an excuse to postpone the November election.”

“Not so, an elections expert said,” retorted the Post, quoting the director of voting and elections at the nonpartisan group Common Cause:

As we’ve written before (FAIR.org, 5/4/20, 3/23/20), many journalists seem fixated on reassuring the public that Trump can’t postpone or cancel the November presidential election, while ignoring the frighteningly real threats to our democratic elections generally (though see the New York Times‘ Emily Bazelon—5/5/20—for a vital recent exception to this trend). Could Sullivan have asked any voting rights experts about the threat to democracy posed by canceling a primary election, rather than just looking for reassurance about November?

The New York Times‘ Stephanie Saul and Nick Corasaniti (4/27/20) similarly framed the story as a dispute between the Board of Elections and “Bernie Sanders and his legion of progressive supporters.”

It’s worth noting that the Sanders camp wasn’t the only incensed party. Candidate Andrew Yang sued the Board of Elections over the move, as the Times failed to report until Yang’s lawsuit—joined by Sanders delegates—was ruled on by a federal judge (New York Times, 5/5/20). Judge Analisa Torres wrote in her ruling (Law360.com, 5/5/20):

The removal of presidential contenders from the primary ballot not only deprived those candidates of the chance to garner votes for the Democratic Party’s nomination, but also deprived their pledged delegates of the opportunity to run for a position where they could influence the party platform. And it deprived Democratic voters of the opportunity to elect delegates who could push their point of view in that forum. 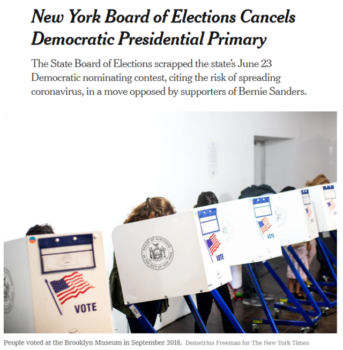 The New York Times (4/27/20) likewise presents the cancellation of the Democratic primary as something that affects “supporters of Bernie Sanders.”

The Times didn’t quote a single outside expert on the dangers of the move, nor did they question the state’s motives, which it presented as being based entirely on the health and safety of voters and poll workers. (The Sanders camp was not arguing for people to turn out at polls during a pandemic, but for a switch to a vote-by-mail system—Washington Post, 4/27/20.) The fact that it would help reduce the influence of progressive Democrats at the Democratic National Convention, and probably suppress the progressive vote in down-ballot elections, it seems, is immaterial. The article closed with words from state Democratic Party chair Jay Jacobs:

“We’re not being unfair, we’re just reacting to a global pandemic which happens to be centered in New York at the time.” He added: “In a situation like this, lives have to trump politics, no pun intended.”

While Saul and Corasaniti mentioned the role of New York Gov. Andrew Cuomo—who endorsed Biden long before the former vice president announced he was running (Democrat & Chronicle, 1/2/19)—they simply repeated his claim that the decision lay with the board, and that “I don’t even understand the issue, to tell you the truth.”

But it’s not hard to see through his feigned ignorance: It was Cuomo’s 2020 state budget that included a provision that gave the Board of Elections the unusual power to remove candidates from the ballot (Common Dreams, 4/21/20), along with provisions that would weaken third parties—like the Working Families Party, which frequently runs progressive challengers against state Democrats (Gotham Gazette, 4/13/20), much to Cuomo’s displeasure (New York, 6/7/18).

As one-time Cuomo challenger Zephyr Teachout pointed out in the Nation(5/6/20), suspending a campaign is different from terminating it; multiple presidential candidates in recent history have returned days or even months after suspending their campaigns. Giving a two-person unelected board the discretion to cancel an election when candidates have not terminated their campaigns is something you would think the home paper of record would take a bit more seriously. 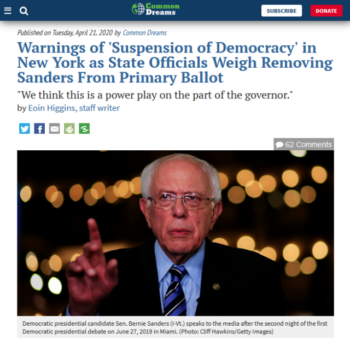 Common Dreams (4/21/20) treated the primary cancellation as a democratic and not a partisan issue.

At least on the editorial side of the Post, columnist Henry Olson (4/28/20)—no Sanders fan—gave voice to the deep problems with New York’s move. At the Times, FAIR could find not a single editorial voice speaking out against the Board’s move.