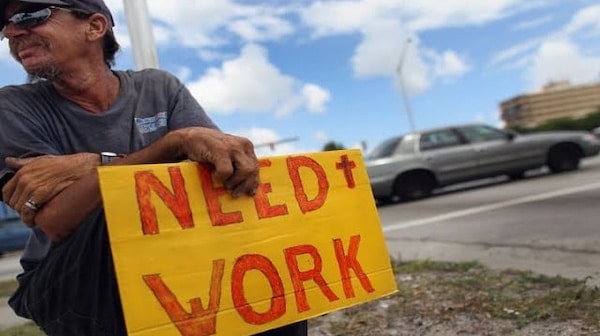 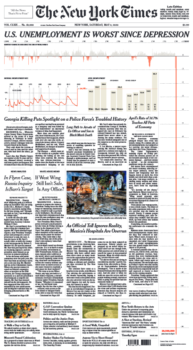 The New York Times (5/9/20) featured a chart of job losses that stretched all the way down the front page.

The Bureau of Labor Statistics’ eagerly awaited Friday morning Official Unemployment Rate report for April—what editors generally call the BLS’s “headline” rate of unemployment—was definitely headline-worthy. This was especially evident in the next day’s New York Times (5/9/20), which ran a bar chart of historic unemployment going back to 1946 across the top of the front page, and then a long red bar down the right-hand column of the entire page showing job losses for April.

It was a dramatic illustration of how the bottom had fallen out of the job market, with 20.5 million new jobless workers bringing the unemployment rate to 14.7%–the highest that number has been since the end of the 1930s.

But the blaring headlines should actually have been considerably worse (perhaps with that red bar running off the bottom of the Times front page).

Ignored by nearly all U.S. news organizations, at least initially, was an explanation made by the BLS at the end of its press release on the April layoffs, explaining that the official U-3 unemployment rate, which is supposed to measure jobless people actively looking for work, was actually incorrect. In a boxed 572-word addendum appended to its press release (and referenced in a note at the top of the release) was the following explanation:

There was also a large increase in the number of workers who were classified as employed but absent from work. As was the case in March, special instructions sent to the household survey interviewers called for all employed persons absent from work due to coronavirus-related business closures to be classified as unemployed on temporary layoff. However, it is apparent that not all such workers were so classified.

If the workers who were recorded as employed but absent from work due to “other reasons” (over and above the number absent for other reasons in a typical April) had been classified as unemployed on temporary layoff, the overall unemployment rate would have been almost 5 percentage points higher than reported (on a not-seasonally adjusted basis). However, according to usual practice, the data from the household survey are accepted as recorded. To maintain data integrity, no ad hoc actions are taken to reclassify survey responses.

There’s a lot of gobbledygook in there, but the upshot is that if reporters and news editors had read the note, they should have reported the BLS “headline” unemployment rate as 19.7%, not 14.7%. As the BLS wrote in its note, if the error in classifying some laid off workers in the survey had been corrected the rate would have been the higher figure .

That correction puts the real U-3 number in the range of unemployment rates that were being reported during the mid-1930s, in the depths of the Great Depression.

The significance of this poor reporting was that the stock market—that supposedly great gauge of economic sentiment—popped up (NASDAQ by 1.58%, S&P by 1.68% and Dow by 1.91%) on the news that the unemployment jump was significantly lower than the 16% that many analysts had been predicting. In reality, though, the corrected rate of 19.7% blasted way past that prediction, and if accurately reported would have caused the markets to tank before the weekend instead of rising, if past history were repeated.

The initial news reports about the BLS’s 8:30 am news release were almost universally wrong in their headlines, and most didn’t bother reporting on the BLS’s note with its 5% correction. 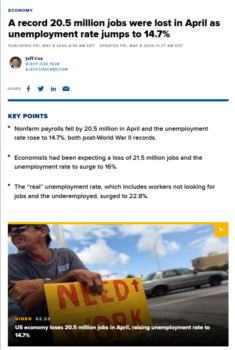 The headline of Friday’s CNBC article (5/8/20) read: “A Record 20.5 Million Jobs Were Lost in April as Unemployment Rate Jumps to 14.7%.” Filed at 8:30 am and updated at 11:27 am, CNBC went with the disavowed “official” number. Reporter Jeff Cox, in his revised article, at least added the BLS comment that some people were erroneously not included as being unemployed, but like most reporters covering this story, he appears to have confused that problem with the routine way that the BLS underreports unemployment:

A more encompassing measure that includes those not looking for work as well as those holding part-time jobs for economic reasons also hit an all-time high of 22.8%. That reading may be a more accurate picture of the current jobs situation as millions of workers are being paid to stay home and thus not willing or able to look for new jobs.

The problem is that Cox is referring to a different BLS unemployment statistic figure: the so-called U-6 rate, which includes “discouraged” workers and people working part-time who want full-time employment. Since investors know all about that rate (which is also reported by the BLS every month), and know how it is always significantly higher than the U-3 rate, it is automatically discounted by them.

In fact, if both the error cited by the BLS itself and the U-6 additions to the tally of unemployed were combined, and added to the 14.7% official U-3 unemployment rate for April, the unemployment rate as of April 16 would have been 27.8%, which would be higher than the record Great Depression unemployment rate of 24.9%, notched in 1933.

CNN (5/8/20), in its main report on the BLS Friday morning announcement, stuck with the 14.7% unemployment figure, and didn’t mention the correction in the box following the bureau’s release. (A subsequent CNN feature—5/8/20—did illustrate how the unemployment rate would be even higher if involuntary part-timers and people who want jobs but are no longer looking for work were included.)

The New York Times (5/8/20) ran with the BLS “official” unemployment rate in its headline (and in its dramatic chart), saying, “The jobs numbers were the catastrophe everybody was expecting.” The article that followed then referred to the 14.7% figure.

Well down into the story, the paper stated, “What’s more, because of issues with the way workers are classified, the actual unemployment employment rate might have been more close to 20%.” This was a fudge. The article should have reported that the BLS explained that there had been an error in how millions of workers had been classified and that, if corrected, that rate would have been, not might have been, “close to 20%.” 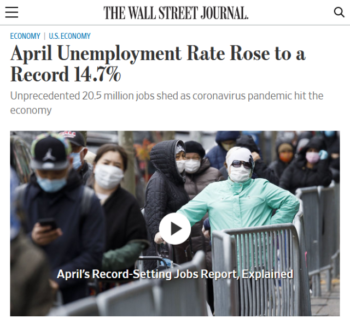 The Wall Street Journal (5/8/20) headlined the 14.7% figure, but noted that if sent-home workers had been appropriately counted as being temporarily laid off, the unemployment rate would have been “almost 5 percentage points higher.”

The Wall Street Journal (5/8/20), which typically does more accurate reporting on unemployment figures, also went with the official 14.7% BLS number in its headline: “April Unemployment Rate Rose to a Record 14.7%.” This article, like others, initially ignored the crucial correction.

In a later revision, the paper did add that the BLS survey “showed a large number of workers who said they were ‘employed but absent from work,’” and wrote that “many of those should have been counted as a temporary layoff, which would have caused the unemployment rate to be almost 5 percentage points higher.” But the revised version failed to note that the BLS itself admitted it was a mistake left uncorrected in deference to its tradition of not altering gathered data once collected. Left unsaid was why the Journal didn’t report the number correctly as 19.7%.

Yahoo! News (5/8/20) stood out for getting the story right. While the article carried the same kind of misleading headline—“April Jobs Report: U.S. Employers Cut a Record 20.5 Million Payrolls, Unemployment Rate Jumps to 14.7%”—reporter Emily McCormick helpfully included a line saying, “The jobless rate would have been nearly 5 percentage points higher, if workers were classified differently during the survey data collection, the BLS added in a note.” After that, she included the full explanation from the actual BLS addendum to its press release.

It’s hard to understand why reporters and editors would have missed an opportunity for a banner headline saying that the unemployment rate in this stunning pandemic recession had already leapt to or perhaps beyond a Great Depression level. Perhaps in today’s era of newsroom cutbacks, and with a race to get the story out first when a government agency embargoes information until a sudden 8:30 am release, these Washington reporters for the most part didn’t take the time to read the BLS’s box explaining the error that it had deliberately not corrected.

Oh well: Since the April BLS report was through April 16, and missed the 7 million more workers laid off in the second two weeks of the month, plus a likely equal amount who’ll be sacked in the first two weeks of May, they’ll get another chance for that screaming headline.

Dave Lindorff, founding editor of the news site This Cant Be Happening! is a 2019 “Izzy” award winner and a former Hong Kong/China correspondent for Business Week.