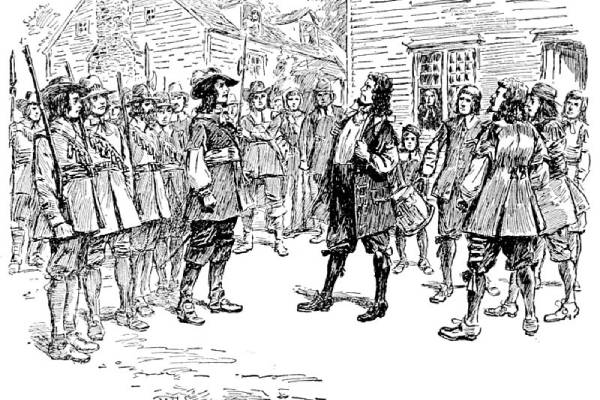 Black and white people united during the Bacon’s Rebellion in 1676 (Pic: Morgan Riley/Wikimedia)

Official figures showing that black people are four times more likely to die from the coronavirus than white people have helped reignite a debate about race.

Supporters of the idea that humanity is divided into distinct groups feel vindicated by the ways the virus has impacted on different communities. This, they say, is proof that we are separated by biology, that race is a scientific reality.

Even for people who reject racism, the concept of race remains seductive because it can appear to explain their experiences.

Prejudice can seem so ingrained, and so resilient, that it feels like it must be an essential feature of human society, something hardwired into us.

Doesn’t it follow then that the different ways in which we experience the world are connected to our biology, and from that to our culture? Is that what lies behind the endurance of the idea of race?

Socialists profoundly disagree. For us, race is socially constructed. That is to say it is an invented category, and that the inventors were people who wanted to create a racial league table—with themselves at the top.

The first thing to note is that the idea of race is a relatively recent one.

The ancient societies of Africa, India, China, Greece and Rome did not classify people according to their skin colours although all sorts of other prejudices flourished in these times.

It was the birth of ­capitalism, and the growth of the slave trade it depended on, that was to change everything.

In the 17th century European powers established colonies in the Americas and the surrounding islands upon which they built plantations.

They transported labour from home to grow crops to make huge profits—which provided the capital needed to build factories and the infrastructure to support them.

But as markets grew and the capitalist system of production spread, so the increasing scale of the plantation operations meant an insatiable need for workers.

Some 12 million people were transported from the west coast of the continent, with a million and a half dying on the journey.

To justify this appalling commerce, the capitalist class in London and beyond needed to explain why their doctrine of “all men being equal” didn’t apply to slaves. The answer? The African’s black skin was proof they were a different species to Europeans, something less than human.

This juncture marked the beginning of the doctrine of race.

Over the course of 300 years these early ideas of race were transformed and codified by science and politics.

As capitalism grew and empires spread across the world, all manner of arbitrary physical distinctions associated with people from particular parts of the world were now deemed “racial characteristics”.

The size of people’s noses, the shape of their eyes and the texture of their hair was then linked to other qualities—such as subservience, laziness, stupidity, aggression and so on.

Phrenologists from London travelled the world taking measurements of people’s skulls, and counting the lumps and bumps on their heads, as part of the mapping of the races.

Surely, Africans and Asians must have smaller heads to accommodate their smaller brains, they argued.By the late 19th century eugenicists sought to misapply Charles Darwin’s theories of evolution.

They needed to invent an explanation for the way those races formed, and how European people’s superior intelligence won out through a process of “natural selection”.

So at every stage the “science of race” was further distorted by the needs of Empire.

But just as our rulers designated Africans as “negroes”, and indigenous Americans as “Indians”, so a similar invention of “whites” had to take place.

In his book, The Invention of the White Race, Theodore Allen notes that,

When the first Africans arrived in Virginia in 1619, there were no ‘white’ people there. Nor, according to colonial records, would there be for another sixty years.

The process of developing a white racial identity helped rulers separate the poor Europeans, who tilled the land as indentured labour trying to pay off their debts, from the black or Native American slave.

Fear of unified rebellion—and of relationships between slaves and non-slaves—had terrified the plantation class ever since Bacon’s Rebellion in 1676 in which poor blacks and whites had united.

The creation of “races” sought to drive a wedge between those who might have been ranged against the planters.

Not only did race separate, it also joined.

Now the white worker, no matter how lowly their status, was told they had something in common with those who stood over them—and their common white skin was the key.

This method of social control was rewarded with what black radical thinker WEB DuBois called a “psychological wage”.

Poor whites were granted certain rights that all black people were excluded from in a bid to convince them that they were members of an exclusive club.

In reality, those benefits were tiny compared to the great windfall that accrued to the rich who now had a divided workforce.

As the new racial code spread from the plantations across the world contradictions within it became ever more apparent.

In colonial Hispanic America it was possible for a person of colour to become “white” by purchasing a royal certificate of “whiteness”.

Allen points out that,

In 1890, a Portuguese emigrant settling in British Guiana would learn that he/she was not ‘white’.

But a sibling of that same person arriving in the United States in that same year would learn that by a sea-change he/she had become ‘white’.

Many decades later in apartheid South Africa, Japanese people were given “honorary white” status, which accorded them the similar legal status to whites, while Chinese people were generally classified as “coloureds”.

We have moved a long way from the crude racial definitions that defined the era of slavery and segregation.

But the principle of attempting to classify people in groups based on genetic patterns continues.

In her book Superior, the Return of Race Science, Angela Saini, looks at the way medicine today still rests on ­racialised assumptions.

She discusses the problem of high blood pressure, which in the US is almost twice as common in African-Americans as it is in other groups.

Saini notes the way that drug companies and the medical ­establishment rest on the idea that the reason for this is “racial”.

Even the NHS in Britain describes being of African or Caribbean descent as a risk factor.

But, Saini writes, when population studies were done,

it turned out that people living in Africa, especially rural Africans, have the lowest levels of hypertension [high blood pressure] in the world.

And all of these are hugely impacted by racism and the poverty it creates.

That’s not to say that our genetic inheritance has no impact on our health.

That’s why doctors routinely ask patients if there is a family history of heart disease or cancer, for example.

For instance, Sickle Cell disease is more prevalent among people whose ancestry is in West Africa.

It results from a faulty gene—a gene that also provides some resistance to malaria.

This can appear to be evidence of a link between genes and race, until we find that Sickle Cell also affects people in Saudi Arabia and India.

The link here is not race, but areas with a prevalence of malaria.

By searching for a “black gene” even well-meaning health professionals are diverting our attention away from the real causes of health inequality.

You can see similar problems with the way the impact of the coronavirus on BME people is being discussed today.

The phrase “underlying health conditions” has become a code for saying a diseased person’s life choices were to blame.

Seeing society through the prism of race does not help us fight racism.

Far from illuminating the different ways people experience the world, it does exactly the opposite.

Racism is real. Race is fiction.