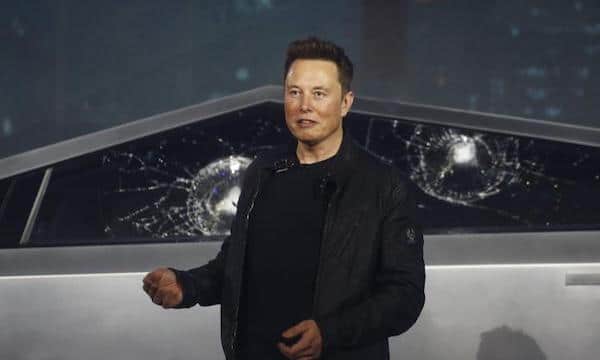 Keeping an article on why Elon Musk is a shithead to a reasonable length is challenging. Musk’s self-image, which he has been successfully peddling to people of a certain type (dickheads) around the world, is of a visionary entrepreneur battling against the odds to harness technology to build a better future for humanity. In reality, he’s just another self-obsessed capitalist and wannabe tyrant, living large off the labour and innovation of the workers he exploits, scrambling desperately for that next bit of media fanfare and driven by his insatiable ego and appetite for profit.

Musk, you might say, is Donald Trump for the kind of unbearable people who upgrade to the latest model smartphone every year. Both have carefully cultivated the idea that they are mavericks bravely battling the forces of conservatism in business and lethargy in politics. Both are known for their incessant tweeting–dishing up a steady stream of commentary swinging wildly from the mundane to the inane and, frequently, the completely unhinged. Both, in the context of the COVID-19 pandemic, have been firmly in the capitalist death-cult camp, downplaying the threat early, and now pushing for a rapid reopening of the U.S. economy despite warnings from scientists that doing so risks hundreds of thousands more lives.

“The coronavirus panic is dumb”, tweeted Musk on 7 March, just when the scale of the health crisis was becoming clear. “Based on current trends, probably close to zero new cases in U.S. too by end of April”, he predicted on 20 March. In the two months since, he has been among the most vocal critics of social distancing–lining up with Trump and giving encouragement to the anti-lockdown protests of the extreme right.

On 29 April, a day when, according to the New York Times, 2,514 Americans died from COVID-19, and more than 26,000 new infections were recorded, Musk tweeted “FREE AMERICA NOW” and, in response to plans for reopening in the state of Texas, “Bravo Texas!” On 12 May, he announced:

Tesla is restarting production today against Alameda County rules. I will be on the line with everyone else. If anyone is arrested, I ask that it only be me.

Despite being true to his word and ordering Tesla workers back amid the lockdown in California, Musk wasn’t arrested. A group of Tesla workers and supporters protested Musk’s decision outside the plant. One worker, Carlos Gabriel, told reporters he was refusing to go back to work. “I’m worried for my health”, he said.

I’m very disappointed in Elon Musk putting profits over the health of his workers.

Musk’s lack of concern for the health of his workers in the context of COVID-19 should come as no surprise. Tesla is known for its appalling health and safety record. “Ambulances have been called [to Tesla’s Fremont, California, factory] more than 100 times since 2014 for workers experiencing fainting spells, dizziness, seizures, abnormal breathing and chest pains”, Julia Carrie Wong, a technology reporter for the Guardian wrote in 2017. Jonathan Galescu, a production technician at the factory, told her:

I’ve seen people pass out, hit the floor like a pancake and smash their face open. They just send us to work around him while he’s still lying on the floor.

A 2017 blog post by Tesla employee Jose Moran, titled “Time for Tesla to listen”, detailed the low pay and poor conditions. “Most Tesla production workers earn between $17 and $21 hourly”, he wrote.

The average auto worker in the nation earns $25.58 an hour, and lives in a much less expensive region … Many of my coworkers are commuting one or two hours before and after those long shifts because they can’t afford to live closer to the plant.

Musk is viciously anti-union. Unionisation attempts by Tesla workers have been dealt with harshly. Several workers have been sacked after management uncovered organising efforts. Others have been threatened into silence. According to Moran, in response to workers’ initial 2017 organising drive, “Every worker was required to sign a confidentiality policy that threatens consequences if we exercise our right to speak out about wages and working conditions”. Based on this, the U.S. National Labor Relations Board found that Tesla had violated workers’ rights. To this day, however, efforts to unionise Tesla’s 40,000 workers have failed.

Musk’s supporters might respond that, in contrast to most other members of his class, he is a “self-made” man, who built his US$36 billion fortune through hard work and a visionary entrepreneurial spirit. This is bullshit. Musk, like Trump, comes from a highly privileged background. His father Errol was a wealthy South African businessman–a consultant and property developer who, according to a 2018 report in the South African edition of Business Insider, bought a half-share in a Zambian emerald mine on a whim to “help fund his family’s lavish lifestyle of yachts, skiing holidays, and expensive computers”.

Musk was a computer enthusiast from an early age and, following his move to Canada with his mother in 1989, quickly developed into a skilled programmer. This trajectory, however, is no different to hundreds of thousands, if not millions, of people around the world, very few of whom end up as members of the billionaire class. What made Musk special wasn’t his hard work, talent or vision. He was simply in the right place, at the right time, with the right connections.Carnivals of the damned: the U.S. far right fights the lockdown

Musk founded his first company, Zip2–a city guide software for local newspapers–in 1995, with the help of US$28,000 (equivalent to US$48,000 today) from his father. This was at the start of the dotcom boom, when investors poured money into any and every computer or internet start-up that happened to emerge. In 1999, at the peak of the boom, Zip2 sold for US$307 million, out of which Musk took home US$22 million. He then used around half of this money to found an online banking service, X.com, which merged with rival Confinity to become PayPal. When, in 2002, PayPal was bought by eBay, Musk walked away with US$180 million.

Musk’s status, among his fans, as a visionary devoted only to making the world a better place, is largely derived from what he did next. In 2002, he founded SpaceX, a company that aims to become a major player in the aerospace industry, enable affordable space travel and, ultimately, lay the basis for the colonisation of Mars. In 2003, he contributed US$30 million towards the foundation of Tesla Motors. In 2004, he took the role of Tesla chair and, in 2008, when the company’s founders Martin Eberhard and Marc Tarpenning walked, he became CEO.

Musk’s current immense wealth derives largely from his success in turning Tesla cars into a status symbol for the more environmentally conscious among the global elite. A new Tesla Model S costs between $125,000 and $165,000–not the kind of money that your average climate activist is likely to have on hand. The sale of these cars makes up by far the biggest portion of the company’s revenue–almost US$20 billion out of US$24.5 billion in 2019. By comparison, its “energy generation and storage” section is a side hustle, bringing in just $1.5 billion, or 6 percent, of company revenue last year.

If Musk’s goal were really to assist with reducing greenhouse gas emissions and halting our slide towards catastrophic runaway warming, you could think of many things he’d be better off doing than producing electric cars for the wealthy few. It’s very likely, in fact, that any reductions in emissions resulting from Tesla’s operations would be more than wiped out by the contribution Musk’s company makes to maintaining and fostering a car culture rather than promoting a shift to mass public transport.

But Musk is a car man through and through. At a 2017 conference, in response to a question from the audience about his attitude to public transport and urban sprawl, he said:

In her authorised Musk biography, Elon Musk: Tesla, SpaceX, and the Quest for a Fantastic Future, Ashlee Vance claims the initial purpose of Musk’s California transport “Hyperloop” proposal was to stymie plans for a high-speed rail link between Los Angeles and San Francisco. “Musk had dished out the Hyperloop proposal just to make the public and legislators rethink the high-speed train”, wrote Vance. “He didn’t intend to build the thing … With any luck, the high-speed rail would be cancelled. Musk said as much to me during a series of emails and phone calls leading up to the announcement.” The strategy worked. Plans for the rail link, first flagged in 2008 and overwhelmingly supported by California voters, are currently on hold.

If you think the environmental crisis is going to be solved by people buying Teslas, or even the construction of a few more giant batteries, you need your head checked and will have your wallet confiscated. Electric cars and batteries are, at best, a very small part of the solution. Much more important are the kind of things to which Musk is hostile, such as massively expanding public transport networks, or radically reshaping cities to allow for more sustainable, higher density living.

As for SpaceX, it’s best described as an expensive, and potentially highly destructive, vanity project. Far from enabling affordable space travel, the company is currently mainly concerned with its Starlink project, which aims to launch more than 40,000 satellites into low-Earth orbit to provide broadband internet around the world.

Sounds good in theory, but scientists have pointed to some significant drawbacks. If Musk’s vision is achieved, the project will put eight times as many satellites into orbit as there are currently. And this is likely just the start. Musk’s initiative has inspired several other companies, including Amazon, to pursue their own satellite broadband networks. The result will be a very crowded sky. So crowded, in fact, that it may threaten the science of astronomy (“it will look as if the whole sky is crawling with stars”, astronomer James Lowenthal told the New York Times). Collisions between these private satellites will enrich whole layers of lawyers. Ultimately, the massive increase in space junk may threaten our ability to safely leave Earth at all.

Musk’s goal of colonising Mars can’t be taken seriously. As with Trump’s justly ridiculed “Space Force”, it’s more an ego-driven promotional exercise than anything else, something Musk can wheel out whenever he feels starved of media attention. In 2015, for instance, he declared, in an interview with the Late Show’s Stephen Colbert, that Mars could be transformed into an Earth-like planet by dropping “thermonuclear weapons over the poles”. In August 2019, he was at it again, tweeting “Nuke Mars!”, and then, a few hours later “T-shirt soon”, with a mock-up T-shirt design. Of course, there is no scientific evidence that carrying out this plan would do anything to improve that planet’s habitability.

Maybe, despite all this, Musk is just a really nice, well-meaning guy at heart? No. If anything, on a personal level, Musk appears even more repulsive than his business interests might suggest. He has developed a penchant for the language of the alt-right, tweeting on 18 May, for instance, “take the red pill”–a well-known trope from the world of men’s rights activists and incels. He’s convinced “smart people” need to breed more, a eugenicist streak that sits poorly with his background as a member of South Africa’s privileged white elite under apartheid. And if all that wasn’t enough, Musk and his current partner–Canadian singer Grimes–named their recently arrived baby “X Æ A-12 Musk”, an act of basic inhumanity that speaks for itself.

Elon Musk, in sum, is a complete shithead–just another piece of billionaire filth helping to drive our planet and the society that depends on it to destruction. The best that can be said for his life’s work, perhaps, is that when the revolution comes, the working class can use SpaceX’s rockets to launch Musk, and the rest of the world’s billionaire class, to Mars, where they will have total freedom to construct the entrepreneurial utopia they long for.