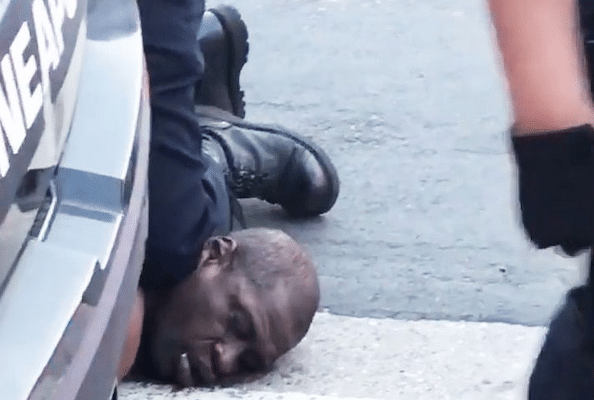 18 hours ago The Boston Broadside Murder by Cop: Knee on Neck for 8 minutes, 46 seconds, including 1

There is no need to wonder why George Floyd (age 46) was murdered in broad daylight in Minneapolis, Minnesota, on May 25, 2020. The script of his death is written deep in the ugly drama of U.S. history.

Scientists who study human respiration say that untrained people can hold their breath from between thirty seconds and two minutes; anything more than that results in a process that leads eventually to death.

Garner lost consciousness, did not receive medical care in the ambulance, and was pronounced dead soon after arriving at the hospital. He died, effectively, of strangulation.

Both Floyd and Garner were African American; both were men who struggled to make a living in a harsh economic environment.

The UN Human Rights head Michelle Bachelet wrote a powerful statement in response to the death of George Floyd:

This is the latest in a long line of killings of unarmed African Americans by U.S. police officers and members of the public. I am dismayed to have to add George Floyd’s name to that of Breonna Taylor, Eric Garner, Michael Brown and many other unarmed African Americans who have died over the years at the hands of the police—as well as people such as Ahmaud Arbery and Trayvon Martin who were killed by armed members of the public.

“The Depression,” the poet Langston Hughes wrote of the 1930s, “brought everybody down a peg or two.” It was different for African Americans, for they “had but few pegs to fall.”

Garner was accused of selling loose cigarettes on the street, violating excise tax laws to make a few dollars; Floyd was accused of using a counterfeit $20 bill. Even if these accusations could have been proved, neither were earth-shattering crimes; if they had gone to court, neither would have earned these men death sentences. They were killed after being accused of minor infringements.

When Hughes wrote those words, Lino Rivera, a 16-year-old Afro-Puerto Rican boy, had been arrested for shoplifting a 10-cent penknife. A crowd gathered when the police went to arrest him, a rumor spread that he had been killed, and Harlem rose up in anger. A government report later showed that the protests were “spontaneous” and that the causes of the unrest were “the injustices of discrimination in employment, the aggressions of the police, and racial segregation.” This report could have been written last week. It suggests a permanent Depression.

Historically, police aggression has come before any unrest. In 1967, unrest in Detroit spurred the U.S. government to study the causes, which they assumed would be communist instigators and an inflammatory press. The riots, the National Advisory Commission on Civil Disorders (the Kerner Commission) said,

were not caused by, nor were they the consequences of, any organized plan or ‘conspiracy.’

Instead, the Kerner Commission said that the cause of the unrest was structural racism. “What white Americans have never fully understood,” the report noted, “is that white society is deeply implicated in the ghetto. White institutions created it, white institutions maintain it, and white society condones it.” By “ghetto” the report’s authors meant the atrocious class inequalities in the United States that had—because of the history of enslavement—been marked by race.

Rather than address the deep inequalities in society, the American government chose to heavily arm police officers and send them to discipline populations in distress with their dangerous weapons. The commission proposed instead “a policy which combines ghetto enrichment with programs designed to encourage integration… into the society outside the ghetto.”

Nothing came of that report, as nothing has come of any of the reports that stretch backward 150 years. Rather than genuinely invest in the well-being of people, the American government—whether governed by Republicans or Democrats—cut back on social programs and cut back on welfare spending; it allowed firms to erode wages and it allowed them to diminish working conditions. What was terrible in 1968 only became worse for the working-class Black population.

If Eric Garner and George Floyd earned a minimum wage of $25 for decent work, would they need to be in a position where a belligerent police officer would accuse them of selling loose cigarettes or of passing a counterfeit bill?

Society in the United States has been broken by the mechanisms of high rates of economic inequality, high rates of poverty, impossible entry into robust educational systems, and remarkable warlike conditions put in place to manage populations no longer seen as the citizenry but as criminals.

Such processes corrode a civilization. The names of Michael Brown, Sandra Bland, Eric Garner, Tamir Rice… and now George Floyd are only the names of the present moment, written in thick ink on cardboard signs across the United States at the many, many protests that continue to take place. The taste of desperation lingers in these protests, along with the anger at the system, and the outrage seems to have no outlet.

Donald Trump is an exaggeration of the normal course of history in the United States. He takes the ugliness to the utmost limit, bringing in the army, sniffing around for the legal possibility of the mass detention of demonstrators. His is a politics of violence. It does not last long. It is hard to beat the urge for justice out of an entire people.

As you read this, somewhere in the United States, another person will be killed—another poor person whom the police deem to be a threat. Tomorrow another will be killed; and then another. These deaths are normal for the system. Outrage against this system is a logical, and moral, response.