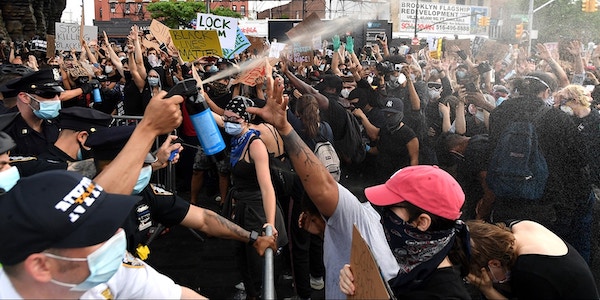 NYPD officers spray Mace into the crowd of protesters gathered at Barclays Center to protest the recent murder of George Floyd on May 29, 2020, in Brooklyn, New York. Photo: Kevin Mazur/Getty Images

AS THOUSANDS OF PROTESTERS converged in Brooklyn on Monday evening, NYPD scanners picked up a bit of radio chatter that stood out even in the atmosphere of boiled-over police violence. After a police dispatcher noted protester movement near the 77th Precinct, a voice on the same channel replies clearly: “Shoot those motherfuckers.” Just as clear was the immediate response:

Don’t put that over the air.

The exchange, at 6:20 p.m., was captured via Broadcastify, one of many publicly accessible websites that allow users to listen in on police and other emergency radio channels nationwide. These sites have “skyrocketed to the top of the App Store” in the wake of George Floyd’s killing by police in Minneapolis, Vice reported this week. An NYPD spokesperson confirmed the radio exchange and told The Intercept that it is under internal review.

After days of increasingly violent repression of protests across the country, and after President Donald Trump called for protesters looting stores to be shot and Defense Secretary Mark Esper called U.S. cities a “battlespace”–the radio message was yet another indicator that police see protesters as enemies to combat rather than the citizens they are sworn to protect. But the chatter was also a sign of how emboldened police have become in calling for violence, and how little they seem to fear repercussions for violent attacks on civilians.

In New York City, as across the country, officers have responded to protests prompted by anger at police violence and lack of accountability with yet more violence and, mostly, no consequence. Over the last several days, NYPD officers have beaten protesters with nightsticks, ripped off masks to pepper-spray them at close range, driven their vehicles into crowds, and in at least one occasion pointed a gun at a group of demonstrators. These incidents, police critics say, represent a significant escalation while also being consistent with a long pattern of violence and lack of accountability by the country’s largest police department. The abuse has been enabled by laws that shield officers from accountability and by barriers to police oversight–as well as by city leaders who have long allowed police to operate with impunity.

“The disturbing videos and reports of the violent attacks by NYPD on protestors and the media, while traumatizing to watch, are all too familiar to us,” a group of New York City public defenders wrote in a statement on Tuesday.

They mirror the stories we hear every day of police acting with impunity, targeting, attacking, beating, lying, abusing, and disrespecting Black and brown people in the communities we serve in all five boroughs.

In response to the police crackdown, NYPD Commissioner Dermot Shea expressed his pride as he congratulated his officers for their actions–days after condemning the officers who killed George Floyd in Minneapolis, calling their actions “deeply disturbing” and “not acceptable ANYWHERE.” Mayor Bill de Blasio, for his part, who also condemned Floyd’s killing in Minneapolis, continued his long-held practice of defending police misconduct in the face of indisputable evidence and attempted to shift the blame to protesters.

“I’ve seen that video and I’ve obviously heard about a number of other instances. It’s inappropriate for protesters to surround a police vehicle and threaten police officers,” de Blasio said earlier this week, in reference to one of those incidents.

The Civilian Complaint Review Board, New York’s independent office for investigating police abuses, has received 467 complaints since Friday, when the protests started, “and is committed to fully investigating them,” a board spokesperson told The Intercept. But the police department is investigating only six, according to Shea. The NYPD spokesperson did not answer questions about several instances of police violence and misconduct that were caught on video. A spokesperson for the Attorney General’s office told The Intercept they are aware of the NYPD radio exchange, but declined to comment further or provide detail on any other ongoing investigation into police actions.

Despite the videos, advocates and victims of police violence fear that the officers involved in these incidents will escape accountability, as a number of officers assigned to protests have begun covering the badge numbers necessary to identify them. The NYPD did not comment on officers covering their badges. 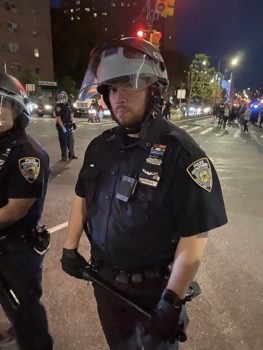 New York City police officers lined up right off the Brooklyn Bridge on Brooklyn Bridge Boulevard on May 31, 2020, in New York. The officer shown has covered his badge number with a “mourning band.” Photo: Obtained by The Intercept

Covering one’s badge number is in direct violation of the NYPD’s patrol guide, which allows officers to wear “mourning bands” covering the seal of the city upon the death of an officer but mandates that the seal number and rank remain visible. In April, Shea wrote on Twitter that some officers would be wearing mourning bands in commemoration of NYPD officers who died of COVID-19.

But covering one’s badge number also violates New York’s Right to Know Act, which mandates officers identify themselves by name, rank, and shield number when they interact with people. The act, which went into effect in 2018, also requires officers to inform those they stop that they have a right to refuse consent for a search, and to document those requests.

“It’s basically protecting NYPD officers from being held accountable in these mass protests, where they’re not actually following the law themselves,” said Jennvine Wong, a staff attorney at the Legal Aid Society’s Cop Accountability Project, in reference to growing reports of cops covering their badges.

Officers had ignored their obligations under the Right to Know Act long before this week’s protest, Wong noted. She called it a “long-standing pattern with the NYPD.”

“It’s really problematic, because it makes it very difficult for advocates for individuals who are the victims of police brutality to hold these officers accountable if we’re not able to identify them,” she added.

And so not only are they acting with impunity, but they are actively trying to hide their identities from people who would hold them accountable.… They’re attacking protesters, and they’re covering their badge numbers. And so, even if we captured them on camera, how are we supposed to hold them accountable?

For the most part, New York law protects officers from meaningful accountability. For years, before this week’s protests, advocates have lobbied legislators to repeal a decades-old state law known as “50-a,” which makes the personnel records of law enforcement officers “confidential and not subject to inspection or review.” As The Intercept has reported, officials have responded to pressure for greater police transparency with even stricter interpretations of 50-a, making everything from complaints of misconduct to the findings of internal reviews, to body camera footage largely inaccessible to the public. Efforts to repeal 50-a in court have failed, but the legislation was back in the spotlight this week after Floyd was killed in Minneapolis. Derek Chauvin, the officer accused of killing Floyd, had 18 previous complaints of misconduct filed against him.

In New York, which has one of the strictest laws in the country protecting the privacy of law enforcement officers, Gov. Andrew Cuomo surprised advocates this week when he expressed support for repealing 50-a, despite the fact that the legislation has been hotly debated during the nine years he has been in office. “I would sign a bill today that reforms 50-a,” Cuomo said. “I would sign it today.” De Blasio has defended 50-a, and under his administration the city has stopped making the outcomes of internal disciplinary reviews available to the public.

A spokesperson for Gov. Cuomo told The Intercept that “the Governor supports reforming 50-A, and has said he will sign a bill that does that,” adding that Cuomo “has asked the Attorney General to review all actions and procedures used during the protests.”

But advocates were skeptical of the governor’s promise–and insisted that the legislation should be repealed rather than simply amended. “He’s been silent on it previously,” said Wong, of Legal Aid.

“New Yorkers have been demanding change for years,” Council Member Antonio Reynoso echoed in a statement condemning the NYPD and the mayor’s handling of the protests.

The NYPD needs to immediately release the disciplinary records of all officers, and where patterns of misconduct by individual officers are discovered, those officers must be terminated immediately and prosecuted where appropriate.

Even before the recent wave of protests, the coronavirus emergency had offered police a new opportunity to escape scrutiny. A city official, speaking to The Intercept on the condition of anonymity, said that the CCRB was already in a tough position before the protests began. With New York City the epicenter of COVID-19, CCRB investigators, like other city employees, have been working remotely for weeks. Although investigations into police misconduct can be done remotely, the official said–much of it involves pushing through cases that came in long before the pandemic–the novel coronavirus has presented unique problems.

First, the official said, the CCRB frequently fields complaints from populations for whom physical visits to the board’s office is a necessity: individuals who lack access to phones or the internet and, in particular, New York City’s unhoused. “The other side of it is the PBA,” the official said–the Patrolmen’s Benevolent Association, the hard-right union representing New York City’s cops. “There have been no officer interviews since the beginning of Covid,” the official said, adding that without cooperation from the PBA, oversight investigators can only go so far. All of this, of course, comes after weeks of controversy surrounding the NYPD’s hard-line enforcement of local social distancing guidelines–and, now, its hammer-fist approach to policing protests. The PBA could not be reached for comment prior to publication.

While few expect the police department itself to conduct fair investigations of officer abuse during the protests, advocates warned that the questionable arrests and excessive force displayed in recent days would likely lead to scores of civil lawsuits against the city. Last year, the city paid $69 million to settle lawsuits over police misconduct, an increase of nearly $30 million over the previous year. And litigating misconduct lawsuits cost the city some $230 million in 2018 and $335.5 million in 2017.

Massive taxpayer-funded payouts over police misconduct are likely to come under increased scrutiny this year, since the economic impact of the COVID-19 crisis is forcing the city to slash its budget for next year by $6 billion. But, as The Intercept has reported, there is one city agency that has been largely spared the across-the-board cuts: the NYPD.