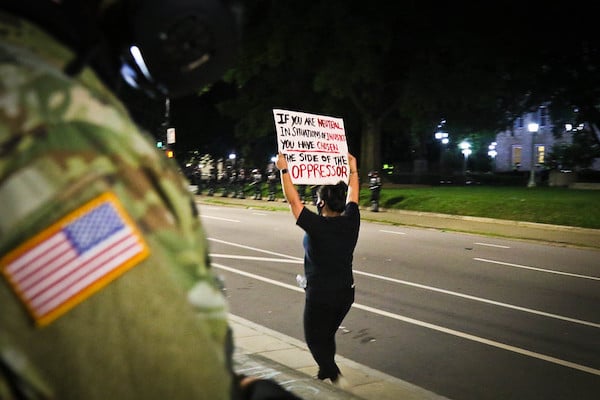 Protester march down the street while Soldiers from the North Carolina Army National Guard 105th Military Police Battalion stand guard in downtown Raleigh, May 31, 2020. Approximately 450 Guardsmen have been mobilized due to civil unrest. The Guard will support local authorities and help safeguard the lives and property of North Carolinians and the ability for individuals to exercise their rights to peaceful protest.

On Monday evening, President Donald Trump delivered a fascistic speech from the Rose Garden in which he announced the deployment of military forces in the capital and an escalation of police repression to end nationwide protests over the police murder of George Floyd one week ago (see: “Coup d’état in Washington: Trump declares war on the constitution”).

Trump’s remarks followed leaked audio from a conference call earlier on Monday between Trump, Attorney General William Barr, Chairman of the Joint Chiefs of Staff Gen. Mark Milley and state governors. In the call, Trump laid out the administration’s plans for a police-military occupation of the country, which received no serious pushback from any on the call.

Vowing not to have a repeat of Sunday evening, when Trump was forced to turn off the White House lights and retreat to a “secure bunker,” he ordered the deployment of active duty military police to occupy the White House grounds. Nine M35 two-and-a-half-ton troop carriers, carrying over 200 soldiers, entered the grounds at approximately 5:00 pm.

Trump’s decree was accompanied by incitement to police violence against the population. As Trump delivered his remarks, 25 minutes before the 7 pm curfew was to take effect, horse-mounted police, armored personnel carriers and hundreds of black-booted military police bearing riot shields fired tear gas and rubber bullets into a crowd of roughly 1,000 peaceful protesters without warning.

Trump’s demand that governors and mayors deploy even greater force to “dominate,” arrest, prosecute and impose long prison sentences on protesters was an attack on democratic rights and assertion of authoritarian rule without precedent in U.S. history.

In the teeth of these threats, nationwide protests continued throughout the U.S. In over 125 cities, youth and workers of all races have defied vicious police repression, curfews, right-wing thugs, vehicular assaults and mass arrests to continue to demand justice for victims of police murder. As of Monday morning, the Associated Press reported that over 4,400 had been arrested, likely a drastic undercount. In Chicago alone, Cook County Sheriff Tom Dart estimated that 2,000 had been arrested over the weekend. In Atlanta, some 200 people were arrested Monday night.

The National Guard has been activated in 21 states, with over 17,000 out of a possible 350,000 soldiers deployed at this time to assist in putting down “civil unrest.” In a number of states, including Kentucky and California, National Guard troops have been shifted from support roles and mobilized alongside heavily armed riot police to directly attack protesters.

The first reported police killing of a protester took place early Monday morning in Louisville, Kentucky, where thousands have marched for six days to denounce the police murder of 26-year-old emergency medical technician Breonna Taylor in March as well as the May 25 murder of George Floyd in Minneapolis. Official reports claim that David McAtee was shot and killed when forces “returned fire.” The reports do not say whether McAtee was killed by police or National Guard soldiers.

McAtee, a 53-year-old barbecue restaurant owner described by his mother Odessa Riley as a “community pillar,” was unarmed. He was left in the street for 12 hours after he was gunned down. According to family members, McAtee died shielding his niece from a barrage of gunfire.

In Omaha, Nebraska, Douglas County Attorney Don Kleine announced Monday that the state would not be pursuing charges against bar owner Jake Gardner, who shot and killed 22-year-old James Scurlock outside his bar Sunday evening.

Kleine ruled that Gardner, a twice deployed Marine and vehement Trump supporter, had acted in “self-defense” and feared for his life. Video evidence shows that Gardner’s father had shoved one protester, who in turn had pushed back. The tape shows Gardner confronting Scurlock, who was with two friends at the time of the tussle.

On Sunday it was announced by Governor Tim Walz that Minnesota State Attorney General Keith Ellison would be leading the prosecution of Derek Chauvin, the fired Minneapolis police officer caught on video holding his knee on George Floyd for nearly nine minutes and ignoring his victim’s cries that he could not breathe until he was dead. After a delay of several days, Chauvin was charged with third-degree murder and homicide, lower-level charges that carry much lighter sentences than first- or second-degree murder.

None of Chauvin’s three fellow cops, who helped restrain Floyd and keep angry bystanders away as the 46-year-old was being asphyxiated, have even been charged. On Monday, Minneapolis Police Chief Medaria Arradondo suggested that the three might be charged, telling CNN that “Mr. Floyd died in our hands and so I see that as being complicit.”

Democratic operative Al Sharpton hailed the appointment of Ellison to oversee the prosecution as a victory for the protesters and sign that “justice” would be achieved. Sharpton is seeking to reprise his role in the police killings of Michael Brown and Freddie Gray, i.e., spreading illusions in the Democratic Party in order to contain and dissipate protests against police violence. Despite Sharpton’s claims of “victory” in these earlier cases, none of the killer cops were convicted and the Obama administration refused to press federal civil rights charges.

Ellison, a supposed “progressive” Democrat and supporter of Bernie Sanders, appeared on Sunday news interview programs to join in denouncing “outside agitators” and back the deployment of the National Guard and imposition of curfews in Minneapolis and St. Paul. On Monday, he sought to temper hopes of swift justice for Floyd, telling CNN he was in no hurry to “rush to judgment.”

Also on Monday, experts hired by George Floyd’s family released an independent autopsy concluding that Floyd died of “asphyxiation from sustained pressure” when his neck and back were compressed by Minneapolis police officers during his arrest. The pressure cut off blood flow to his brain, the autopsy determined.

This conclusion is at variance with the autopsy report released Monday by the Hennepin County Medical Examiner, which, while agreeing that Floyd’s death was a homicide, said the cause of death was “cardiopulmonary arrest [heart failure] complicating law enforcement subdual, restraint, and neck compression.” The medical examiner made no mention of asphyxiation and said heart disease was a factor in Floyd’s death.

Protests have continued in Minneapolis despite the brutal police crackdown and extension of the nightly curfew, which began at 10 pm Monday night. According to Governor Tim Walz, a Democrat, 476 protesters have been arrested since Friday.

Walz was effusive during the conference call with Trump Monday morning, thanking him for his “strategic guidance” in urging the full deployment of the National Guard to suppress peaceful protests.

In New York City, mass protests against police brutality continued despite the ongoing threat of COVID-19 that has killed nearly 16,500 in the city. Protesters were set to defy a newly imposed 11:00 pm curfew as thousands of multiracial youth remained in the streets as of this writing. New York police have arrested over 1,000 people.

Despite mostly peaceful marches throughout Southern California Monday, National Guard troops have been deployed to Los Angeles. As of this writing, police have arrested at least 50 people in Los Angeles for allegedly “looting.”

Despite the widespread nature and participation of broad sections of the population in the protests, which have taken place in every U.S. state and capital, governors and mayors of both parties continue to propagate the myth that “outside agitators,” Antifa and “anarchists” have “hijacked” the protests. These baseless claims are being amplified in an attempt to break up the protests against state violence, justify more police violence on a massive scale, and carry out unconstitutional measures to criminalize political opposition to the government’s policies.