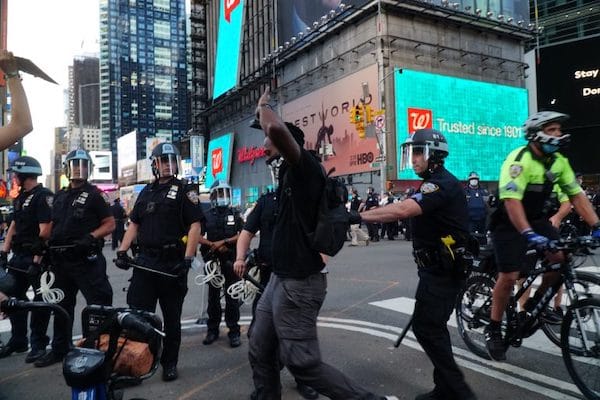 6 days ago The Indypendent America’s Unfinished Revolution: Where Do the George Floyd Protests Go From Here?

It takes but a few minutes for the ruling elite to recast collective calls for an end to state violence against black people into images of the criminality of black protesters and to call for an end to looting.

How quickly the government wants us to get back to the status quo where the ruling elite has been looting from the working poor every single day of our lives. Looting from the labor of black workers through over 200 years of slavery in our country. Looting from the labor of black workers in the 100 years of convict-leasing and forced contractual tenant-farming under the Black Codes. Robbing working people–and always the hardest hit black and brown people among them–their schools, their homes and communities, their labor, their health, their rights, and their lives.

Even during the three months of this pandemic, a handful of billionaires have already looted $434 billion from the backs of the working people while people continue to suffer.

If we’ve learned anything from the legacy of the Black Codes–created by former slaveholders after the Civil War to re-enslave freed blacks into a system of enforced labor, perpetual inequality and second-class citizenship–we know that all this looting by the ruling elite cannot occur without a legalized system of criminalization and state violence.

In Policing the Crisis, Stuart Hall looked at the law-and-order policies that mirror Reagan’s manufactured campaign against drugs and muggings in the black community.

Hall argues that at every turning point or crisis when people come together to challenge the legitimacy of the government, when we unmask the illusions of our “civil democracy,” that the ruling elite do two main things to hold on to their power in order to continue looting from working people. A) They refashion and rename the laws that criminalize sections of the working class, legally making them an underclass of second-class citizens without rights. B) They intensify state violence and terror. “Law and order.”

While Derek Chauvin and his fellow police officers must be prosecuted and convicted of homicide, we must see the real role police play in our society. It is to flex the muscles of the ruling class and to maintain the ruling class’s interests. To manage dissent as our collective exploitation deepens. To keep order as the disorder in our lives becomes unbearable. Police violence sets the stage for intensifying inequality so the ruling class can manage to maintain order as they continue to loot from us.

Police power is sanctioned by laws of criminalization. Thus, the slave laws became the Black Codes after the Civil War, and then the Drug Reform Act after the Civil Rights and Black Power Movements.

During the same year that Reagan signed into law the Anti-Drug Abuse Act of 1986 and introduced the mass incarceration system we know today, he also signed into law the Immigration Reform and Control Act and a provision, called the employer sanctions provision. Following the same form of the slave laws and Black Codes, this law makes it a crime for undocumented workers to sell their labor freely, relegating them into an underclass of workers with no rights.

At a time when workers across racial divides were just beginning to unite and fight for better conditions, not only did this law lead to the criminalization and incarceration of countless undocumented workers, but it put undocumented workers against other workers, particularly poor black workers, forcing them into a cycle of unemployment, underemployment, mass incarceration and poverty.

So at this critical juncture, when we face another turning point, a crisis of legitimacy, what will be the result of the spontaneous actions of the multitudes of people that have united together to denounce our government:

Will we release some steam for a few days, be satisfied with the prosecution and (if we’re lucky) conviction of a few cops, accept a few reforms of a police system that will never be accountable to anyone else but their maker–the ruling class? Will we settle for mere survival, be content not to be killed, so that we can live under the peace of everyday violence and robbery forced upon our communities, our health, and our lives?

Will we hang onto illusions that equate equal opportunity with being as exploited as a vanishing group of white, middle-class workers are or as a few black and brown faces rising into positions of power and wealth? That is not the liberation of us all.

If we’ve learned anything from our history, it is that our history’s turning points failed to turn toward true transformation and liberation for people because at each critical juncture from Reconstruction to the Civil Rights Movement to the recent Occupy Wall Street movement, ruling power has hereto been able to disunite working people: poor white farmers from freed slaves, industrial from agricultural workers, citizens from immigrants. Consequently, it has succeeded in deceiving people into accepting reforms that served only a fraction of the working class while undermining the collective unity of the 99 percent.

We must see that these state-sponsored killings are a war, not only on black people but on all working people. It is time that working people, the 99 percent, provide political leadership, starting with a clear demand to end the criminalization that divides working people and fight for equal rights for all workers. Only then will we be able to unite together against our common oppression and exploitation and realize our unfinished revolution.

Josephine Lee and Zishun Ning are organizers with the Break the Chains Alliance, which calls for equal rights for all workers.