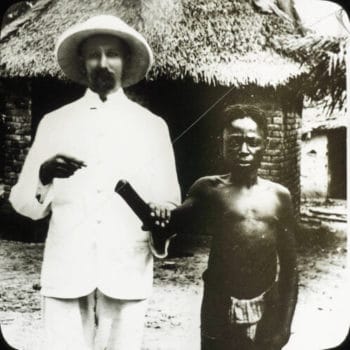 Millions of white people glorify mass murderers because their sense of identity and place in society is deeply tied to white supremacy.

The perpetrators of crimes against humanity are often elevated to positions of respect and admiration. It all depends on who did the killing, and who was killed. Now the murderers are being called to account.

The new movement in the United States against police and other state violence has inspired this welcome change taking place all over the world. The criminals are being exposed decades and even centuries after their atrocities took place.

There is no statute of limitations for murder nor should there be for calling out people who have the blood of millions on their hands.

Statues of Belgium’s King Leopold have been defaced and even removed. Leopold held the Congo as his personal fiefdom, the Congo Free State, where he killed as many as 15 million people who were forced to work on rubber plantations.

The cruelty of murder and mutilation was exposed after a more than 20-year reign of terror. George Washington Williams, a black American journalist, played a key role in bringing the genocide to public attention.

Instead of Adolf Hitler being the only European who comes to mind when genocide is mentioned, the name Leopold ought to have the same effect. But Hitler killed Europeans and Leopold killed Africans. The crimes of one are widely known while the other escapes condemnation because his crimes were erased. King Leopold killed as many as 15 million people who were forced to work on rubber plantations. 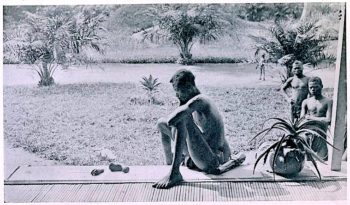 Father stares at the hand and foot of his five year-old daughter, which were severed as a punishment for having harvested too little caoutchouc/rubber. (Photo taken at Baringa, Congo state, May 15, 1904)

The same can be said of Winston Churchill. During World War II he presided over a famine in colonial India caused by the theft of rice and wheat which supplied Britain’s armies. An estimated 3 million people died but starvation in Bengal province was not his first opportunity to commit mass murder.

After World War I he advocated gassing Iraqis who rebelled against British rule. “I am strongly in favor of using poison gas against uncivilized tribes.” He had already ordered chemical weapons attacks against the Russian Bolsheviks in 1918.

Now Churchill’s statue in London’s parliament square is covered in a large box to protect it from protesters. A group scrawled graffiti which correctly labeled as a racist the man who said that his Indian victims “breed like rabbits.”

The taboos are falling just like the statues that honored slave traders and Indian killers in this country. Robert E. Lee’s monument in Richmond, Virginia is now covered in graffiti, and a likeness of George Floyd, whose murder at the hands of police motivated people to denounce the killers whose crimes are covered up. Too many historians choose to affirm corrupt systems rather than tell the truth. But the people are ignoring entreaties from all the elites and are taking matters into their own hands. 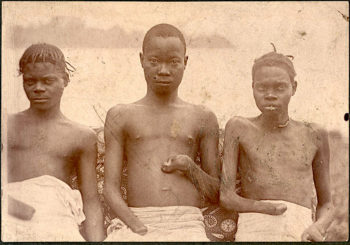 Churchill said that his Indian victims ‘breed like rabbits.’

Christopher Columbus is among those being exposed. His voyages on behalf of the Spanish crown were followed by other European invasions which brought disease and bloody conquest against indigenous populations from the tip of South America all the way to Alaska. This genocide was the precursor to the trans-Atlantic slave trade which brought Africans to suffer as chattel throughout North and South America..

But there is a reaction to every action and when the question of removing the Columbus statue in New York City was raised, governor Andrew Cuomo demurred, “But the statue has come to represent and signify appreciation for the Italian-American contribution to New York.” Columbus was born Cristoforo Colombo in Genoa.

This need for Cuomo and others to hang on to the criminal is obvious. Columbus puts Italians at the center of the settler colonial state. They are not the southern European catholic immigrants who were often looked down upon when they first arrived. Columbus makes them white Americans and they cling to him lest they lose that imprimatur.

Columbus puts Italians at the center of the settler colonial state.

Everyone should work mightily to remove the stain of mass murderers who even define how we identify ourselves. The name Columbus came to mean America itself. We are left with a South American nation, Colombia, named after him. The U.S. capital is the District of Columbia, while Canada’s far western province is doubly colonized with the name British Columbia and cities like Columbus, Ohio and institutions like Columbia University abound. The indigenous who suffered because of his invasion now have their culture labeled pre and post Columbian. The crimes continue as millions of people are forcibly linked to the genocidaire.

New York’s governor is not alone in trying to stem the tide of truth telling. A group of white men armed with guns and other weapons felt the need to protect a statue of Columbus in Philadelphia .

This intransigence tells us why it is so important to name and shame the mass murderers. Their credibility must be destroyed if white supremacy is ever to become a thing of the past. The statues must go and so must excuse making for atrocities if whites are the perpetrators and non-whites are the victims. 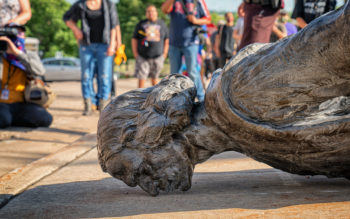 The fallen Christopher Columbus statue outside the Minnesota State Capitol after a group led by American Indian Movement members tore it down in St. Paul, Minnesota, on June 10. (Tony Webster)

The hand wringing over monument removal is not just connected to reverence for these individuals. While millions of people want change, millions more do not and they hold on to Columbus or Leopold or Churchill or Robert E. Lee because their identity and place in society is firmly tied to white supremacy. If a Columbus statue comes down so might a small portion of white entitlement and its privileges.

The monuments to genocide must come down. The discomfort caused to the elites is of no concern to anyone who wants to strike at the heart of racism as practiced around the world. Goodbye and good riddance to Churchill, Columbus, Leopold and all of their ilk.

/Margaret Kimberley’s Freedom Rider column appears weekly in BAR, and is widely reprinted elsewhere. She maintains a frequently updated blog as well at patreon.com/margaretkimberley and she regularly posts on Twitter @freedomrideblog. Ms. Kimberley lives in New York City, and can be reached via e-Mail at Margaret.Kimberley(at)BlackAgendaReport.com.

4 speeches that prove Black Panther Fred Hampton was the Godfather of rap
Racism, COVID-19, and the fight for economic justice